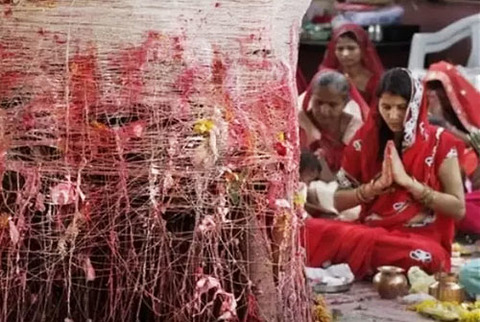 Our ancient scriptures mention the ‘Ashvattha’ ‘Kalpavriksha’ and ‘Brahmavriksha’ as the trees of religiosity, which indicates that worshipping trees is indeed an ancient Indian practice. Trees are significant in many of the world’s mythologies and religions, and have been given deep and sacred meanings throughout the ages. Every religion entails myriads of beliefs and religious people follow these beliefs with all the devotion. Trees have been worshiped by the Hindus as a matter of obligation as they represent religious belief. Tree/Plant worship has its roots in ancient times and continues to be an element of modern Indian tradition. ‘Naimisharanya’ is the holy forest where ‘Shree Veda Vyasa’ taught the Vedas and all the Parana’s to his disciples. Sacred trees are invoked on special days for long life, for the expiration of sins, for averting mishaps, or for the fulfillment of a particular wish. The wood of sacred trees is never used as fuel as it invites the wrath of gods. There are many sacred trees which have a place in Hinduism. When we refer religiosity of trees, the ‘Verse 1 of chapter 15 of Bhagavad Gita’ bounce into our consciousness, wherein Lord Krishna interpret that, for the soul, this material world is like a colossal “Ashvattha Tree” (Sanskrit, pronunciation of the Peepal Tree). The tree is mentioned in Rig-Veda. ‘Siddhartha Gautama’ became ‘Bhagavan Buddha’ after attaining enlightenment under this ‘Ashvattha Tree’ that is why this tree is also sacred to Buddhist. It is also called the Bodhi tree or “tree of enlightenment”. In northern India, on the ‘Somavati Amavasya’ worshippers pour water and un-boiled milk on the roots and 108 times circumambulate the tree. The ‘Ashvattha tree’ is said to be imperishable, with the Vedas as its leaves. In fact, the three principal gods in Hinduism, Brahma, Shiva, and Vishnu, all have associations with the “Ashvattha Tree”.

‘Kalpavriksha’ commonly known as Banyan tree, in Hindu mythology is the tree that provides fulfillment of wishes and other material gains. It finds mention in the Vedic scriptures, believed to have emerged from the primal waters during the ‘Samundar Manthan’ (ocean churning). Believed in Indra’s “Devaloka” the five ‘Kalpavrikshas’, are: ‘Mandana, Parijata’, ‘Santana’, ‘Kalpavriksha’ and ‘Harichandana’, all of which fulfill various wishes. Believed Lord Krishna stood beneath ‘Kalpavriksha’, when he delivered the sermon of the Bhagavad Gita.

Brahmavriksha (known in Sanskrit) is the ‘Palasa’ tree is one of the sacred trees worshipped in India. There is a mention of the Palasa tree in both Ramayana and Mahabharatha. The Pauranic belief has it that Brahma metamorphosed into a ‘Palasa’, Visnu into a ‘Peepal’ and Rudra into a ‘Bargad’ tree after being cursed by Parvati, the wife of Lord Siva. Apart from the trees referred in the preceding lines, some of the other trees having religiosity are: ‘Mango Tree’: The significance of this tree finds mention in the Ramayana, Mahabharata and the Puranas. The mango as a fruit is a symbol of love and fertility. The leaf of the tree is used during most religious and social ceremonies of the Hindus. The branches are used for ‘Yagna’ worship. While the Mango leaves are considered very sacred. On auspicious occasions, mango leaves are tied to a string and hung at the entrance symbolically to absorb negative energies from entering the home. Mango leaves are put in an earthen pot filled with water (kalash) to worship Varun (god of water). The mango leaves and coconut fruit placed in an earthen pot filled with water, has its own importance as “Purnakumbha” that is placed at every ‘Puja Sthal’ in Hinduism that symbolizes Goddess Lakshmi and good fortune. The Jain goddess Ambika is traditionally represented as sitting under a mango tree. In Hinduism, the perfectly ripe mango is often held by Lord Ganesha as a symbol of attainment, regarding the devotees’ potential perfection. Mango blossoms are also used in the worship of the goddess Saraswati. The ‘Coconut’ (Sanskrit: Sriphala – God’s fruit) alone is used to symbolize ‘God’. Sage Vishwamitra is said to have got the first coconut tree grown on this earth by the power of his ‘Tapasya’ (austerities). The coconut is associated with Lord Ganesha, at the beginning of any auspicious task people smash coconuts to propitiate Ganesha, the remover of all obstacles. In India one of the most common offerings in a temple is a coconut. Coconut trees are used for all kinds of religious purposes, mainly utilizing the coconut fruits in religious ceremonies. Coconut plays a vital role in all puja rituals. The marks on the coconut are even thought to represent the three-eyed Lord Shiva. ‘Ashoka Tree’: a symbol of love is sacred to the Hindus, being dedicated to Kama Deva, God of Love.The tree is e. Ashoka is a Sanskrit word meaning without grief or that which gives no grief. The Ashoka tree is a symbol of fertility in Indian culture. It is considered to be a sacred tree in Hinduism, Buddhism and Jainism. The Ashoka tree has a symbolic importance in Buddhism. Queen Maya of Sakya is said to have given birth to the Buddha under an Ashoka tree in a garden in Lumbini, so it is planted in Buddhist monasteries. This tree is also regarded with veneration in Jainism. In the Jain tradition Mahavira is said to have renounced the world under this kind of tree in Vaishali. In Indian epic of Ramayana the Ashoka tree is mentioned in reference to the Ashoka Vatika (garden of Ashoka trees) where Hanuman first meets Sita. Some plants are believed to have originated from bodies or limbs of Gods and hence, the sanctity. For example, the ‘Flame of the forest’ (a common name for several plants) is believed to have originated from the body of Lord Brahma and the Rudraksha tree arose from the tears of Lord Shiva. There are many trees which are considered sacred.

‘Manu’ believed that they were conscious like humans and felt pleasure and pain. Indian sages and seers eulogized Asvattha or Peepal, Bel, Bargad or Banyan, Asoka, Arjuna and many other trees which acquired social as well as religious sanctity with the passage of time.