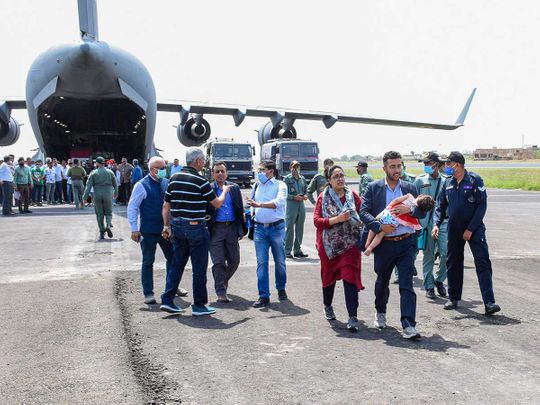 India has completed the complex mission of evacuating its diplomatic staff, including the ambassador, from Afghanistan. Some 200 people including the envoy and embassy staff were brought back from Kabul in two military aircraft – one flight landed on Monday with over 40 staffers while the other came in on Tuesday afternoon with around 150 people.

Indian Ambassador to Afghanistan Rudrendra Tandon was on the second C-17 heavy-lift transport aircraft of the IAF that landed at the Hindon airbase near New Delhi on Tuesday afternoon.

“Movement of the Indian Ambassador and the Embassy staff from Kabul to India was a difficult and complicated exercise. Thank all those whose cooperation and facilitation made it possible.”

The details of the complex mission have now started to come out in the public domain.

What really happened in Kabul?

The Taliban had managed to take over Afghanistan’s capital Kabul on Sunday without much resistance. President Ashraf Ghani with others fled the country hours before the Taliban captured the presidential palace and the rest of the city.

India decided it was time to close down the diplomatic mission in Afghanistan, where it had invested so much money and effort over the past two decades, for now.

News agency AFP reported that while India had successfully carried out the initial evacuation with over 40 people, the second group was stopped and made to turn back by the Taliban on Monday.

Backchannel talks were then launched with the Taliban as well as other foreign agencies for providing safe passage to the remaining Indian staff.

The Taliban agreed and deputed its armed fighters, some carrying machine guns and rocket-propelled grenade launchers, to escort Indians to the airport, which was under the control of the United States Army as the last of the evacuations carried on.

Some 150 Indian diplomats and nationals were stuck at the mission and had to be escorted to the military aircraft that was on standby for the evacuation to New Delhi.

Nearly two dozen vehicles were assembled for the drive from Kabul’s green zone, where the Indian Embassy was located, to the Hamid Karzai International Airport – some five kilometres away.

“When we were evacuating the second group… we faced the Taliban, who refused to allow us to exit the green zone. We then decided to contact the Taliban and ask them to escort our convoy out,” AFP quoted an unnamed Indian official as saying.

The journey in the middle of the night from the embassy to the airport took several hours and men and women on the convoy spoke of a constant threat of a potential attack.

It was reported that several checkpoints had sprung up on the road leading to the airport and thousands of people were walking along.

At one point of time, the Taliban fighters even had to fire in the air to keep the crowd away from the Indian contingent.

Once at the airport, the Taliban fighters left and it took some two hours for the Indian group to board the C-17 military transport plane for their journey back to India.

The Ministry of External Affairs said yesterday: “In view of the prevailing situation in Kabul, it was decided that our Embassy personnel would be immediately moved to India. This movement has been completed in two phases and the Ambassador and all other India-based personnel have reached New Delhi this afternoon.”

IPL 2022 will surely have 10 teams, this is last season with 8 franchises: BCCI treasurer Arun Dhumal
Why dry fruit prices soaring across Jammu ?
Comment