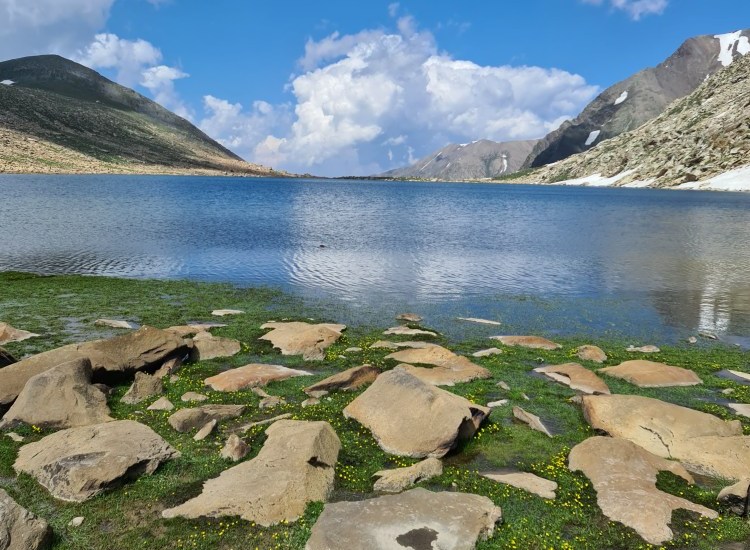 K D Maini
Add Comment
With the opening of Mughal road, the valley of seven lakes has come on the tourism map. There is a need for the construction of link roads, pony paths, viewing decks, shelter sheds, rest houses, and guest houses at Noori Chhumb, Panjtari, and Girgan for the convenience of the tourists, trackers and climbers

Girgan, the valley of seven lakes is the most attractive, beautiful, and natural scenic spot of the Peer Panchal region. This valley falls in Poonch district. It is about 60 km, east of Poonch City, and situated about 10,000 to 15000 feet above sea level. The valley starts from the top of Bharamgala (Chai) mountain and goes up to Raviwali Dhok which is touching the last corner of Budhal Tehsil. This valley remains under snow cover for about five months during the winter season.

It is the coldest zone of the Pir Panchal range. A series of mountain ranges take off from this valley. Snow-capped lofty peaks, picturesque valleys, attractive-gushing streams, crystal clear lakes, glaciers, lush green pastures, Dhoks, Margs and multicolor flowers are some of the distinguishing characteristics of the valley of seven lakes. This valley is about 42 km long and 17 km in breadth which comprises about 38 dhoks and margs. There are about 27 lakes in this valley but seven are famous: Nandansar, Chandansar, Sukhsar, Baghsar, Akaldakshni, Neelsar and Gumsar. These lakes are popularly known as Sar which is a local word meaning a lake while meadows are called Margs and Dhoks. The historic Mughal road which is an alternate route to link Kashmir with the rest of the country passes from the outer edge of the valley of seven lakes.

Girgan is considered the homeland of nomadic tribes, Bakarwals, Gujjars and Pahari migratory population who start pouring in the Dhoks and Margs of this valley in the beginning of spring season along with their cattle, flock of sheep, goats, horses and after passing about six months in this cold region, return to their native villages in the month of September. The important Dhoks and Margs of this valley are: Girgan, Gali Girgan, Panj-tari, Khuian, Chai, Hussan Thumb, Kuthwali, Bagnuwali, Godrian Wali, Kafarkatha, Raviwali Bayarwali and Kaagallana.

Apart from these dhoks, margs and pasture lands, there are seven important natural lakes located in this valley at the elevation of 11,000′ to l3200′ ft. Nandansar is about two and a half-mile in length and about a mile in breadth. Kotarasar is the smallest lake but has the most attractive scenic look. Katorasar is also the source of Poonch River. The water of Nandansar flows towards Alibad Sarai which is situated in Kashmir valley while the water of all other lakes flows towards Poonch-District in the shape of Parnai Nallah and Chitta Pani Nallah.

Since this area remains under snow cover for about five months in a year, therefore it remains uninhabited in winter season. At present the valley is not connected with road, only three bridle paths are leading towards this charming valley. These routes are Noorichamb-Husathum-Panjtari-Nandansar, Bheramgala-Chai-Gali Girgan-Khuian-Nandansar and Dhera Ki Gali-Rattan Pir-Kuthgali-Girgan-Nandansar.

As per the legend, in ancient times there was a king known as Girgan Dev who ruled over this track. He was a spiritually endowed king having six sons and one daughter. The name of his sons was, Nandan, Chandan, Neel, Sukh, Bhag, Gum and Kali (daughter). In his old days, Girgan Dev decided to leave Kingship and go to the jungle for the worship of God. With this idea, he directed his children to go to the mountains of Panchal range and select the place where he could worship God for the rest of his life. On the orders of their father, all the six sons and daughter left for search of a peaceful place for him, After selecting the sites, everybody came back and reported to their father except Gum who did not return. After sometime Girgan with his sons and daughter left in search of Gum. When they reached near Gum Sar of the present time, they saw Gum sitting at a beautiful site. He said to his father that he would not vacate this place as he himself would stay there. In this way, Gum confronted his father. At this moment, Girgan Dev, became so furious that he embedded his son Gum in the earth with divine power and said that he would never come out on the surface and people would not know even his name. Then Girgan Dev accompanied by his other five sons and daughter visited the places selected by them for his worship. After visiting these places, their father was very happy and pleased. He said that after their death, all of them will be converted into beautiful lakes. By this way you will live on the earth forever in the shape of lakes. Afterward, the six places are known after the name of the five sons and one daughter that is Nadan Sar, Chandan Sar, Sukh Sar, Katora Sar, Bhag Sar, Neel Sar, and Kali Dachani. Therefore, the valley of seven lakes is known as Girgan after the name of Girgan Dev.

The valley of seven lakes is suitable from tourism point of view because a number of lush green margs fall in this area. Panjtari is worth visiting marg of this valley. This scenic spot is located at 11500 feet above sea level. Forest belt is far below from the Marg. The view of sunrise and sunset cannot be expressed in words. Three kms long and two kms in breadth, this plateau on the top of Peer Panchal range is next to Gulmarg.

The valley of seven lakes can easily be developed for adventurous tourism, because a number of passes and paths leading towards Kashmir valley fall on this track which can attract trackers. While the hilltops like Kaajalana and Nandansar top are suitable for climbers.
With the opening of Mughal road, the valley of seven lakes has come on the tourism map. There is a need for the construction of link roads, pony paths, viewing decks, shelter sheds, rest houses, and guest houses at Noorichumb, Panjtari, and Girgan for the convenience of the tourists, trackers and climbers.