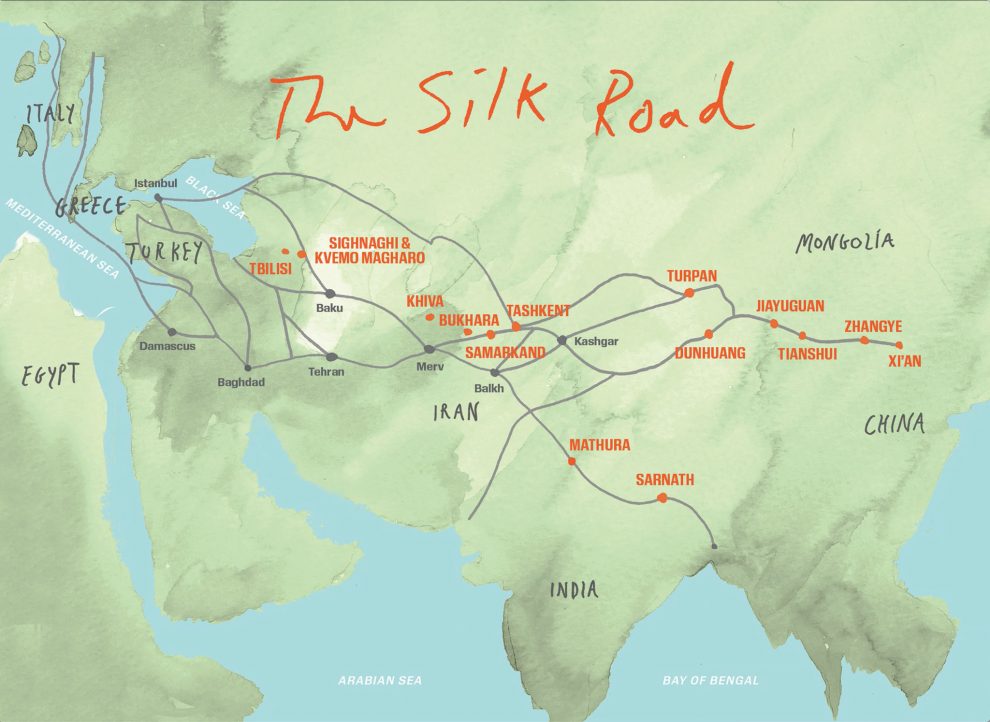 One might ask how this book is different from the many others about the Silk Road. At its heart, it attempts to solve a 2,000-year-old riddle of ancient geography: Where was the now-lost Stone Tower that Ptolemy spoke of, which marked the midpoint on the old Silk Road as caravans plied their trade between Europe and Asia? Once it began functioning sometime around 100 BC, this ‘road’ would connect two of the great empires of the day—Rome and China—along east–west routes, even as some branched south into India and others would soon include many far-flung kingdoms. Its midpoint was the most important landmark for travellers, thus making any search for it intrinsically worthwhile and requiring no further justification. It was here, too, that one of the greatest long-distance caravans in history halted to rest and trade, and its forgotten story is told once more in the pages that follow.

Claudius Ptolemy (circa AD 90–168) is considered the finest scholar of his time; and his work continues to be much studied today, especially by way of the many splendid maps prepared from his rare texts that are housed in museums all around the world. It is from his treatise Geographia—an atlas of the ancient world—that our puzzle arises. In it, Ptolemy listed thousands of places extending all the way to the Far East, including a reference to the Stone Tower. This was a special place high up in the mountains, situated somewhere by the doorway into and out of China’s western extremity, in a region referred to as the Roof of the World.

A monk during the Middle Ages hunted down a copy of Ptolemy’s manuscript, which had by then become lost to the world. Ever since his discovery, the tower’s precise location has been vigorously debated by many scholars and in multiple languages—so much so, that it is near impossible to review all the material written about it. Until now, however, no book has been published with the sole focus of locating this elusive landmark, which, over the centuries, has taken on almost mythical proportions. If its location could be positively identified, then not only would this be of great significance to the study of ancient geography, but it would also allow future archaeological work in this region to be more targeted, thereby increasing the chances of successful excavations. This, in turn, could lead to other settlements and landmarks detailed by Ptolemy also being rediscovered, helping scholars further unlock the history and cartography of many nations.

In 2015, attempting to answer this question, I wrote an article titled ‘The Location of Ptolemy’s Stone Tower’, which appeared in The Silk Road, a journal then published by the Silk Road Foundation. Although it provides the basis for this book, my article had to comply with the journal’s word limit and academic style. Now, with further research, including new material recently published by others, this topic can be discussed in a more thorough and accessible way with the general reader in mind.

As will become evident, only by understanding the wider historical context during this period can this site be located with any certainty. For this reason, this book is divided into three parts: the first explains the birth of the Silk Road; the second covers key events in history that determined the Stone Tower’s establishment at the halfway mark; and the third pinpoints where the tower actually was located. Since it stood on a caravan route deep within the heart of Asia, this narrative will not examine coexisting maritime routes although, broadly speaking, they too were a part of this transcontinental Eurasian trade network.

A hundred years before Ptolemy, two neighbouring peoples would begin to gain ascendancy in the region, the Kushans and the Sogdians. The former became one of the first middlemen of a road that would join two continents until then unaware of each other. Kushan merchants would eventually be replaced by their northern neighbour, the Sogdians—an Aryan people, originally from Persia but now living at its northeastern edge (mainly straddling present-day Uzbekistan, Tajikistan and Kyrgyzstan). They, too, became expert merchants and their trading culture is described in this book in a somewhat novel way, by portraying the lives of four generations of caravanners. Yet, even their brief story—limited to a paragraph per chapter and shown in italics—will endeavour to be historically accurate and provide glimpses of the life of caravanners on the Silk Road.

The timeline we cover spans almost 300 years: It starts in 140 BC, when a Chinese palace guard named Zhang Qian volunteered to travel west for his emperor, in the process founding this celebrated trade route; and it ends in AD 140, when Ptolemy probably completed his Geographia and revealed the site of the Stone Tower. For the most part, this period parallels the First Silk Roads Era dating from 100 BC to AD 250 as defined by historian Craig Benjamin, which ‘resulted in the most significant transregional commercial and cultural interactions experienced by humans to this point in history’. He goes on to describe it as ‘the quintessential example of ancient globalization’. Today, we find modern history often reflecting a Western world bias when apportioning credit for recent human advancements; and sometimes, through omission, even erasing Eastern influences. The history of the Silk Road reminds us why it is wrong to understate the impact of older civilizations, from where it all began centuries earlier.

Any book involving history across nations, by necessity must deal with the names of people and places originating from various languages and scripts. Here, these are spelt or romanized in a way familiar to most (a second, common form is sometimes shown in brackets). In a few cases, ancient names in translations and quotations have also been standardized—without any loss of meaning—so as not to be unduly confusing. And to avoid overwhelming readers with too many names and dates, as far as possible this narrative will only mention the key ones. More so, because this book does not set out to make a detailed study of the various topics covered—rather, with the Silk Road as a backdrop, it attempts to solve the age-old riddle surrounding Ptolemy’s lost Stone Tower.

Excerpted with permission from The Stone Tower: Ptolemy, the Silk Road, and a 2,000-year-old Riddle, Riaz Dean, Penguin Viking. Read more about the book here and buy it here.

“Lords of the Deccan”: This book puts a spotlight on early medieval Deccan, from the 6th century CE to the 12th century CE
Loved the web series “Rocket Boys” and want to know more about Dr. Homi Bhabha: This new book sheds light on his rich scientific legacy and vision for India
Comment