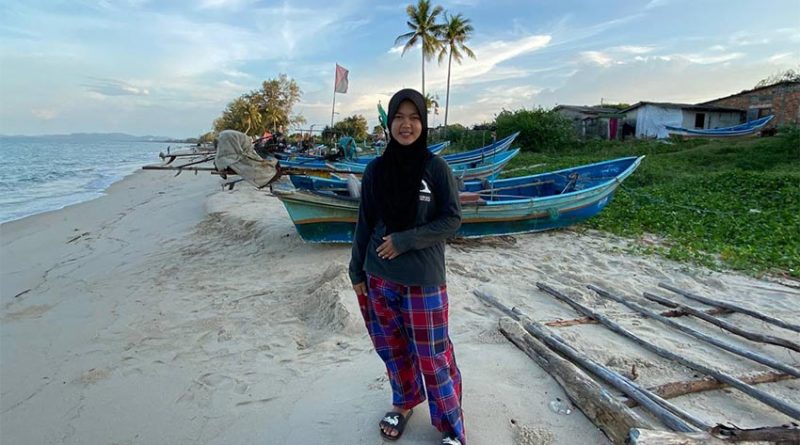 BAAN SUAN KONG, Thailand: Even as a young girl, Khairiyah Ramanyah knew that the idyllic coast she lived on in southeast Thailand was increasingly at risk from development that threatened her fishing community.

Khairiyah, 18, is now something of a local hero having led protests against a proposed industrial zone that she and other activists fear will devastate the coast, their homes and their livelihoods and that is now under review.

Authorities say the Special Economic Zone (SEZ) in Chana district in southern Songkhla province will include a deep-sea port, power plants and industries on nearly 7,000 acres (11 sq miles) of land and will generate about 100,000 jobs.

But most of about 150 families in the village of Baan Suan Kong are concerned that authorities did not consult them or inform them of the project’s potential effects, and that jobs are likely to go to foreign migrant workers.

“This is not just about us and our village,” said Khairiyah who has led youngsters in her village in conservation activities since she was eight and calls herself a “daughter of the sea”.

“People in the cities, whose food comes from here, they will be affected too if we lose our lands and our access to the sea,” she told the Thomson Reuters Foundation as village elders seated beside her nodded.

Protests have erupted in Thailand in recent years as evictions from forests and farms have increased to make way for mines and power plants that villagers fear hurt the environment and livelihoods, with two battles underway in the southeast.

Earlier this month, the Thai cabinet said it would put the Chana SEZ on hold and review the 18-billion baht ($560 million) project that authorities say will boost the economy as the nation recovers from the coronavirus pandemic.

Deputy Agriculture Minister Thamanat Prompow said a panel would be set up to review the project and the villagers’ concerns, with an environmental impact assessment underway.

“The plan for the industrial complex has not been withdrawn, but will be considered by the new panel which will be composed of representatives from both sides,” Thamanat said.

Songkhla, located in the Malay peninsula on the Gulf of Thailand, was historically a centre of maritime trade.

Authorities believe development in Songkhla can help end a 15-year insurgency that has affected the three Thai provinces in the deep south with some 7,000 people killed.

Alongside the Chana SEZ, authorities have also revived a plan for a deep-sea port in neighbouring Pak Bara.

Proposals for that port were earlier shelved due to objections from the community and environmentalists, who complained to the National Human Rights Commission (NHRC) that it would uproot and impoverish about 20,000 villagers.

The NHRC, in a 2015 report, noted that the Pak Bara port was one of dozens of projects in the country where the Thai government “attaches importance to economic and industrial development over improvement in the well-being of the people”.

The Marine Department has said the Pak Bara port will be one of the country’s first “green” ports with minimal damage to the environment, and villagers will be adequately compensated.

“We recommended to the government that they undertake an environmental impact assessment and allow more people from the community to participate in the decision making process,” said Tuenjai Deetes, a former NHRC commissioner.

“Major projects such as these must not be undertaken until their impacts are fully studied,” she said as she waited to testify at a trial recently of nearly a dozen people charged with disrupting a public hearing in 2017 on the Pak Bara port.

The villagers said they were only trying to ask questions.

“We need development but in a way that protects our resources for future generations,” said Mut Yamanyu, 68, an eighth-generation fisherman, and the oldest of the protesters to be charged for trespass at the meeting.

“The sea is all we know. If this port is built, our way of life will be destroyed forever,” he said.

The Chana SEZ would require re-zoning land use from agricultural to industrial, turning green areas on the map to purple, at a time when pressure is mounting for nations to “build back better” with more environment-friendly solutions.

Villagers who will be affected by the Chana SEZ and the Pak Bara port have proposed eco-tourism projects and a modern seafood processing facility that can generate jobs and teach new skills while preserving the environment.

Authorities keen to boost economic growth battered by the pandemic have not yet responded to these proposals.

Governments keen on driving investment are sticking with a “top-down” approach that pays little heed to the needs and wishes of local communities or what’s best for the environment, said Charlie Thame, an assistant professor at the political science faculty in Bangkok’s Thammasat University.

“People often want investment and substantive development, but there’s rarely any genuine public input, transparency or accountability, nor adequate protections for local communities and the environment,” he said.

While the Chana SEZ has been shelved for now, villagers will continue to press the government for participation and limiting the impact on the environment, said Sor Rattanamanee Polkla, a human rights lawyer representing the Pak Bara protesters.

“It is good that the government is reviewing the project, but the community must be a part of the process,” she said.

Khairiyah has also turned to the global community of youth climate protesters for support.

In a letter to Swedish teenage activist Greta Thunberg published in local Thai newspapers earlier this year, Khairiyah said she had drawn confidence from her to travel to Bangkok and present a petition against the SEZ to the Thai prime minister.

“I wanted to share my experience with people who are facing the same challenges elsewhere because they will understand what we are going through,” she said.

“We live in a small village but I want the world to know our story.”