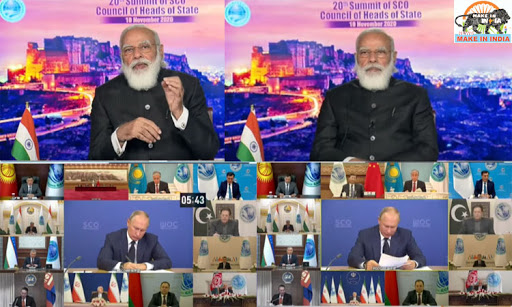 The 20th SCO (Shanghai Co-operation Organisation) Summit (Virtual) took place on 10th November under the chairmanship of Russian President Vladimir Putin. As usual, a good deal of diplomatic rhetoric was deployed by the heads of the eight-member Body, mainly the leaders of China, India and Pakistan. Given the intense on-going rivalry between India and Pakistan, India and China and India and Pakistan and China combined, the SCO summits appear to be uninspiring.

In the name of multilateralism, and regional cooperation, countries join groups like SCO and in turn SCO joins other multilateral bodies like United Nations, Commonwealth of Independent Nations, ASEAN and so on. But whether any meaningful purpose, in terms of national interest, is served in such regional groups is a big question of strategy for respective foreign policies and for international politics. Note that SAARC has been stalled by the internecine and hitherto irreconcilable conflict between India and Pakistan.

The SCO was created on 15 June 2001 as a political, economic and security alliance by six countries in Central Asia including China. India and Pakistan joined the grouping in 2017 at the behest of Russia and China. Russia wanted India to be included perhaps to counter-balance the overbearing position of China, which got Pakistan to balance India. Both countries joined together in a summit in Astana, Kazakhstan.

Sample the speeches made in the summit yesterday, in order to substantiate the charge of being rhetorical than realist. Chinese President Xi Jinping said, “SCO members should deepen mutual trust and resolve disputes and differences through dialogue and consultations, while firmly dealing with terrorist, separatist and extremist forces”. Yes, this is the Chinese tactic. They chip away territory of their neighbours like India through ‘salami slicing’ and then negotiate. They will go through rounds of negotiations like the eight rounds done so far with India in regard to the current six-month old LAC standoff, but not budge an inch from their occupation. They talk of dealing with terrorists but shielded Azhar Masood by vetoing in his favour in the UN.

Jinping continued, “Countries of the SCO should resolutely oppose external forces’ interfering in their internal affairs under any pretext”. He was perhaps referring to Quad Foreign Ministers’ meeting in Tokyo last month to counter Beijing’s belligerence in Indo-Pacific region. But he conveniently forgets his interference in India’s internal affairs or for that matter Pakistan’s and Nepal’s. Furthermore, Xi waxes eloquent, “we need to act on the vision of common, comprehensive and sustainable security, address or forms of threats and challenges effectively and foster a sound security atmosphere in our region”. It could not be more platitudinous as China poses the major threat to the Indo-Pacific security.

Pakistan Prime Minister Imran Khan speaking after Modi criticised India without naming the country and praised China for all the largesse it receives from Beijing. In an apparent reference to Kashmir, which is a national obsession for Pakistan, Khan said, “SCO stands for strict observance of the principles of UN charter such as equality and sovereignty of states and peoples’ right to self determination.” He added, “unilateral and illegal measures to change the status of disputed territories must be opposed”. Khan made the statements in violation of foundational principles of SCO consisting of consensus and cooperation, and of the Shanghai spirit.

Note that in September this year India walked out of a virtual meeting of the National Security Advisors of SCO as Pakistani representative projected a controversial map of the borders. The SCO chair then, Russia, later informed New Delhi that the Pakistan had displayed the map despite being asked not to do so.

Narendra Modi targeted both Pakistan and China without, of course, naming them. He said in a tone of admonition, “India believes that to enhance connectivity, it is important that we move forward while respecting one another’s sovereignty and territorial integrity”. This was a direct reference to China’s latest incursion in Ladakh. In a clear reference to Pakistan, Modi pointed out, “there is an effort to bring in bilateral issues into the SCO agenda which is against the spirit of the SCO charter”. He went on to affirm India’s foreign policy objectives in the region, “India believes in peace, security and prosperity and has always opposed terrorism, illegal arms smuggling, drug trafficking and money laundering”.

Arguably, SCO serves little purpose as the meetings are a routine and a ritual as a part of international political drill. If the spirit of solidarity and cooperation were imbibed by the member countries, there would not be any bilateral conflict causing enormous material and human costs. SCO, as it goes, is unlikely to achieve higher level of regional cooperation due to at least four obstacles: one, it has inherent institutional weaknesses, a crisis of confidence, conflicting national interest and continuing bilateral problems.

The bleak future of a grouping like SCO is foretold by the mutual misgivings and mistrust by the leadership both in Beijing and New Delhi. This was articulated in a virtual Round Table by a German Progressive Foundation on ‘China and India in the New Asian Geopolitics’. The two main speakers were; Dr. Hu Shisheng, Director, Institute of South Asian Studies, China Institutes of Contemporary International Relations (CICIR), Beijing and Ashok Kantha, Director, Institute of Chinese Studies (ICS), Delhi and former Ambassador of India to China.

Dr. Hu faulted India in escalating the border conflict. He said India’s activities on the border were based on adventurism, opportunism and political correction. He explained political correction as New Delhi mending its ties with Washington and both coming closer in the shared desire to check China. In a rebuttal, Ashok Kantha reminded everyone how the world is experiencing the downside of rise of China as an economic power. This perspective was backed by Dr. Nil Schmid, Member of Parliament and Spokesperson of the Social Democratic Party (SPD), Germany on foreign affairs. He suggested that there was a systemic rivalry between China and the West.

Talking about the European Union and the United States, Dr. Nil shared the western expectation that China would politically liberalise as its economy grew with the trade and investment from the west. But the Chinese leadership chose a different path, and worse, attempts to export and impose a model which runs counter to concepts of human rights, liberty, rule of law and democracy in general.  He added that they did not have to choose between US and China. That choice was made 70 years ago when Europe decided to ally with United States for its commitment to values of democracy. As the grapevine has it, India is being invited to the ‘summit of democracies’ proposed by the American President-elect Joe Biden. New Delhi, of course, would be inclined to participate in such a summit provided that Biden becomes the President in next January. However, to conclude, SCO would remain a forum for moralistic assertions and diplomatic deliberations. It may not serve much purpose. India will soon find itself an ‘odd man out’, as China and Russia, the major members of the group. Xi Jinping has elected himself the President for life and Putin till 2036. India which prides itself as a democracy is obviously in the wrong tent. Time for a rethink!