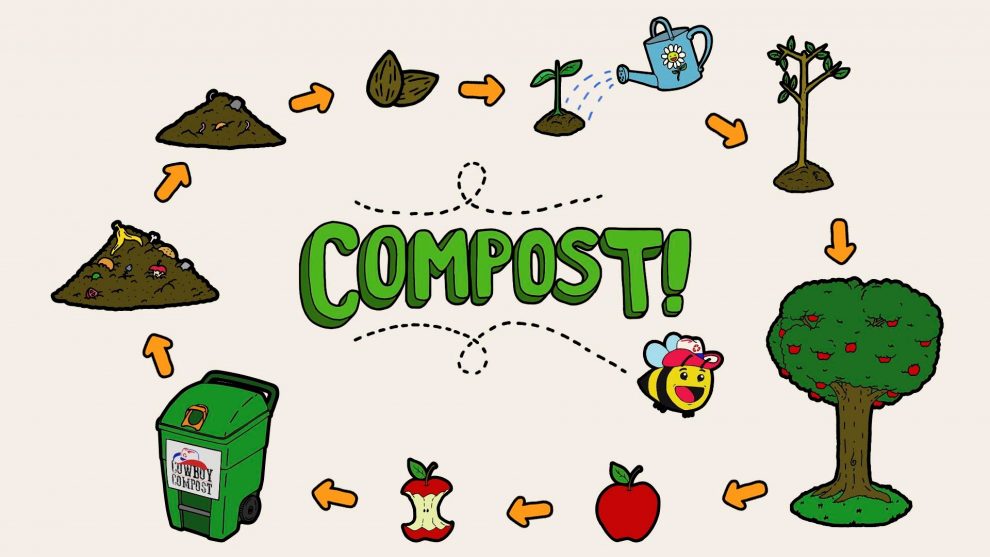 Thus far, we have managed to scratch the surface to learn the finer scientific aspects of composting. Before we understand the deeper nuances of curing, let us put the whole process in a nutshell so that it stays in the back of your mind as you get down to executing an initiative in your community or home or elsewhere.

As we have understood, composting is a highly intricate process where temperatures keep going up and down. An ice cream box frozen at sub-zero conditions can go stale and begin to smell bad because of the presence of anaerobes that thrive even at -2°C. Micro-organisms can be present even at extreme temperatures: at -2°C, and also at 122°C. Scientists have unearthed certain microbes which can survive much higher temperatures. According to Las Cumbres Observatory, certain extremophilic bacteria that can thrive even at 340°C in hydrothermal vents were discovered deep in the ocean where the water actually boils. Microbes are a fascinating topic if you care to soak in the details that highlight Nature at its minutest best.

While this gives us an idea about the extreme conditions in which these creatures survive, let us now look at what happens in a controlled environment like an apartment or home where composting is happening in containers. In this case, the standard procedure takes anything between 30–45 days depending on whether the waste was shredded and accelerators were used. A whole lot of work has to be done by different strains of bacteria and other microbes to transform the organic material into compost. Here is just the gist of it. However, just like moisture levels, the sources I referred to quoted different temperature levels for each type of microbes.

There are mainly three stages:

Temperature, about 0°C–12°C. Psychrophiles digest carbon compounds, where carbon is literally burned or oxidised. If the temperature goes below this, then the microbes go dormant and the process may halt especially if composting is going on in an open field. Since we are discussing composting in closed containers with sufficient aeration vents, temperature doesn’t get dissipated that easily. Composting happens even in freezing temperatures. Just that it doesn’t proceed at a pace you prefer.

Most of the composting in our heaps actually happens because of mesophiles. These microbes are comfortable at 21°C–32°C just as human beings are. Mesophiles live and grow in temperatures of 10°C–45°C. Most of the composting that we do in India, barring some cold months in the north, begins with mesophilic microbes and proceeds till thermophilic microbes take over. The initial stages are always dominated by the mesophilic bacteria and fungi. But this temperature is not enough to kill pathogens, weed seeds and fly larvae. However, there is no need to feel disheartened in case the temperature doesn’t go up beyond 45°C. Pathogens get killed if this temperature is maintained for a few days. More importantly, as already discussed in the ‘Pathogens’ chapter, it is not only high temperatures that kill pathogens.

Above 45°C. When thermophiles take over, they can raise the temperature up to 71°C where it usually stabilises. This is when most of the pathogens and weed seeds are destroyed. If the pile becomes cool, we should not mistake it for completion of the process. It doesn’t mean composting has stopped happening. It actually means the thermophiles have gone and the mesophiles have come back. Some experts look at this as the next stage, the one before curing. You have to turn the pile and mix up the uncomposted organic material lying on the fringes with the one in the centre to build up the heat again. It needs new material and turning to dial up the heat. But again, modern composters take away the need to turn the pile because of the accelerators we use and the closed containers that insulate the heat efficiently and do not let the fringes or outer layers get too cold or dry.

And then we have extremophiles. As the name suggests, they survive in extreme situations. These specialist microbes manage without air and can be present even at 122°C or beyond according to some recent findings.

Only when all the food (carbon and nitrogen) has been composted, do the bacteria die. But the enzymes they produce keep on breaking down cellulose and lignin later on. They help fungi and actinomycetes thrive. These organisms love medium temperatures and moderate heat zones. When the pile is hot at the centre, they move to the outer fringes. They keep on breaking cellulose, starches, proteins and lignin—the toughest things. As mentioned before, it is actually the actinomycetes that give the pleasing earthy smell to the compost. As you can see, composting happens in stages and each strain of bacteria and fungi enter the pile at certain temperatures. But the presence of each one of them is necessary to break down a certain type of organic material. First to be broken down are soluble sugars and amino acids from the plant materials. Then starch, followed by pectin and cellulose. Only in the later stages do lignin and some waxes get digested by fungi.

Just to make the experience richer, try remembering these facts which will certainly help you show off your scientific prowess! Composting essentially takes place within mesophilic and thermophilic ranges. However, it takes 55°C to kill the human pathogens as well as most plant pathogens, and at least 62°C to kill the weed seeds.

Typically, composting takes 30–45 days to happen. If you chop/shred and add accelerators, 25–30 days are enough to get that earthy smell. It is better to let the compost cure for a minimum of one month before using it.

A heap of compost is always a work in progress. But that is only if you ensure proper conditions.

Excerpted with permission from Endlessly Green: Solid Waste Management For Everyone, Savita Hiremath, joint imprint of Simon & Schuster India and Yoda Press. Read more about the book here and buy it here.