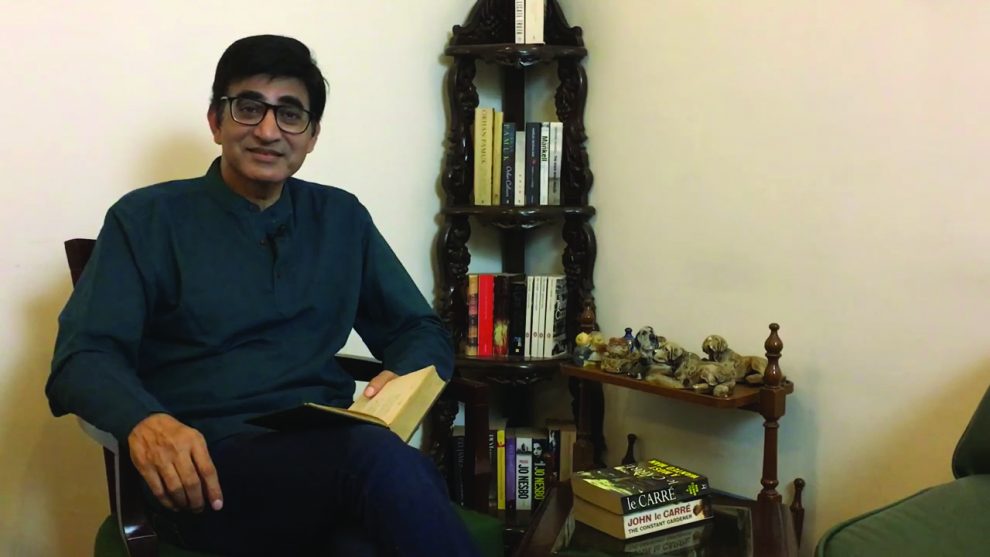 The only rival to Ram Mohan’s salacity was the desire for learning. Just being known as a learned man would not do. He wanted to be intellectually feared. A few among his peers at D.A.V. College had already done a PhD; some were to receive the honour soon. He could not remain without one for long; he approached the head of the Hindi department—Trivedi ji—who he acknowledged as a scholar because of his masterly knowledge of Sanskrit. Ram Mohan’s main literary adversary among his peers was one Mishra who did not have a PhD yet; they both vied for his attention though Ram Mohan had an inkling of Trivedi ji having a soft spot for his rival, and the topic he suggested to Ram Mohan for his doctorate could easily be seen as a trap by any perceptive mind.

It was an obscure poet of seventeenth century, from a saintly sect devoted to Nirgun Brahm, an ultimate unqualified being. There was little material available on him. Even his verses had not been collected as yet, and none in the Hindi department seemed to know of anybody who could help Ram Mohan gain a toehold in the world of this poet-saint. Clearly, the task required a great deal of fieldwork in Rajasthan, the region to which the poet belonged. His predicament was one of the talking points in the department. He also suspected that the topic suggested was a ploy to keep him engaged in a pointless exercise that would gnaw away at his confidence. Had he wanted he could have backed out, but Ram Mohan embraced the challenge. He would liken his nature to that of a river, which revealed its real strength only when prodded by obstacles.

On his next visit to Parsadpur he brought up his PhD mission during a meal. His mother as usual expressed her displeasure. She tended to disagree with anything threatening to keep her son away from her for long. She wondered in annoyance when he would finish his studies. Ram Mohan laughed and explained that this was the most important degree for anyone wanting to be taken seriously in this profession; when he told her there were people who wanted him to fail, her motherly weakness was transmuted into exhortation for him to succeed. The news of his new undertaking was directed at everyone, his mother, Chacha and Kanti, but the way he packaged it was meant exclusively for Gayatri, who was sitting on the floor beside his mother not far from where Ram Mohan and his Chacha were having food sitting cross-legged on small stools. A little self-conscious in Ram Mohan’s presence, she was trying to engage Nishant and Sandhya who hovered nearby; Kanti was making chapattis in the far corner that served as kitchen. Talking in a measured tone, he was using words that made him sound dignified, which was odd in his home setting and had his mother peeved, for while talking to her and his Chacha, Ram Mohan would use the village dialect. She did not object, perhaps thinking the topic of the conversation could not be elucidated in any other manner. But Ram Mohan—with respect to his yearning—knew there was something that only his absence could achieve. He wanted the lilt of his voice and sound of his words to keep ringing in Gayatri’s consciousness while he was gone. He had already embarked on his quest during one of their walks from Kanti’s school, knowing that the first crucial stage of any such journey consisted in signalling one’s interest to the woman so desired; then let the idea work on her before resorting to a clearer hint to get the drift if she was game. To Ram Mohan’s glee, Gayatri innocently provided him with a fortuitous moment to kick-start his expedition.

Fond of listening to the All India Radio (AIR) on the small transistor, she had heard a ghazal sung by a famous singer, one of the couplets of which had particularly charmed her; the reason was the way it sounded, not the meaning, but thanks to the style of the singer she had remembered tidbits of that particular couplet of this ghazal which Ram Mohan knew by heart, the entire ghazal, a very famous one.

He told her about its poet Meer, one of the two tallest pillars of Urdu poetry, the other one being Ghalib. To Gayatri’s surprise, Ram Mohan rendered most of its couplets then and there, singing in his own way, with impeccable tonal inflections, emphasizing the beauty of Urdu words. She could not curb her smile when he came to the said couplet, in which Meer laments that if indifference were not the norm among the beautiful, even the most naïve of them would have the cure for the yearnings of his heart. While explaining it, Ram Mohan took great pains not to be overtly explicit for fear it might unnerve her; he just alluded to the irony the poet wished to convey, that even a simpleton possessed the ability to soothe an ache of this nature. Unnoticed by his friends, he flicked a look at Gayatri and segued into another topic but not before catching the sudden deepening of her complexion, enough to convince him of having given her some food for thought.

And now with the way he was talking about his PhD project, he tried to present a different side of his personality—a level-headed, authentic intellectual persona—a far cry from the lovesick heart in Meer’s couplet. He knew the potency of this combination with respect to seduction. The notion of important men being thus vulnerable could lend any woman with a modest background a strange sense of amour propre. He was also aware of the virtue of tempering one’s sensual pursuit with an air of insouciance. His absences for reasons of some scholarly engagement would also come in handy, giving his person a gloss of gravitas.

His words of wisdom to his friends in Kanpur would often be: Do not confuse flippancy with humour while trying to impress a woman. You’ll put her to flight if she is sensible and worth pursuing.

Excerpted with permission from The Politician: A Novel, Devesh Verma, Penguin Viking. Read more about the book here and buy it here.

The Dispatch is present across a number of social media platforms. Subscribe to our YouTube channel for exciting videos; join us on Facebook, Intagram and Twitter for quick updates and discussions. We are also available on the Telegram. Follow us on Pinterest for thousands of pictures and graphics. We care to respond to text messages on WhatsApp at 8082480136 [No calls accepted]. To contribute an article or pitch a story idea, write to us at [email protected] |Click to know more about The Dispatch, our standards and policies
TagsDevesh Verma Nehruvian era Penguin India The Politician

COVID-19: Govt extends Corona Curfew till May 17 in 20 districts of J&K