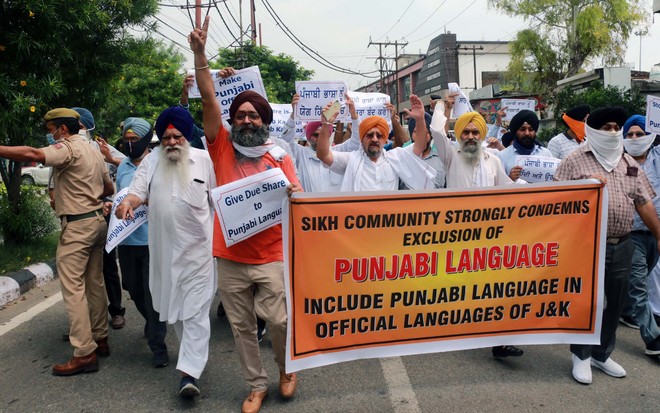 During September, the Indian Parliament passed the Jammu and Kashmir Official Language Bill (2020) according to which Urdu, Kashmiri, Dogri, English and Hindi shall be the official languages of the Union Territory of J&K. This ends the status of Urdu as the sole official language of the erstwhile state of J&K.

Given the passion and emotion, language issues can generate, the inclusion of some and exclusion of others will lead to a sharpening of divisions in a region already plagued with multiple fault lines.

J&K: A profile of major languages in the State
According to the sixth schedule of the constitution of the former state of J&K, eight languages —Pahari, Gojari, Dogri, Kashmiri, Balti, Dardi, Ladakhi, and Punjabi — were the regional languages. With the inclusion of Kashmiri and Dogri languages, the Gujjar, Punjabi, and Pahari communities have protested against the exclusion of their languages.

Demands to include Punjabi, Gojari and Pahari
Punjabi is one of the most widely spoken languages of J&K according to the 1911 and 1941 census. It has two scripts: Gurmukhi and Shahmukhi. The former script was popularized in by the second Sikh Guru Angad Dev in the 16th century and is the script of the Sikh religious scriptures. The latter became popular in the twelfth century as Baba Farid wrote his poetry in this script which is a part of Guru Granth Sahib. All the Muslim Sufis used this script before the partition of India. In the case of J&K, both scripts are widely in use. Khalid Hussain, a celebrated Punjabi and Urdu writer said: “Punjabi is not only the language of Sikhs but also of Hindus, Muslims and Christians in J&K. The total population speaking Punjabi is about twenty lakhs but only one and a half lakhs Sikhs speak Punjabi. The Shahmukhi script, popularised by Sufi saints — Waris Shah and Bulle Shah — is spoken from Chhamb to Lakhanpur. Punjabi serves as the mother dialect of Gojari, Pahari and Dogri. The government should have followed the old language policy of Urdu as the link-language and others as the regional language.”

Pahari is one of the ancient languages spoken across J&K, in the border belt stretching from Rajouri to Kupwara. It has a distinct identity and peculiar culture despite some shared similarities with Gojari, Punjabi, and Dogri languages. According to Zafar Iqbal Manhas, former secretary and Vice-President of the J&K Academy of Art, Culture and Languages, “the Union Government’s decision of not including Pahari in the list of official languages in J&K speaks non-application of mind of those at the helm of affairs. This is surely a unilateral and dictatorial decision which in no way is palatable to more than ten lakhs Pahari Speaking people of J&K. This decision was taken without consulting or taking into confidence the main stakeholders; that is why that the languages claimed to be spoken by one or two per cent people have been included as official languages. One fails to understand, if the government can include five languages as official languages, then why not seven or eight?.”

Gojari, the language of the nomadic tribe of Gujjars and Bakarwals, comes from the Indo-Aryan language family. It is widely spoken in Rajasthan, Uttarakhand, Himachal Pradesh, Punjab, Haryana and in Afghanistan and Pakistan. According to said Zafar Choudhary, editor of The Dispatch, “Gujjars feel humiliated and let down due to Kashmiri and Dogri being picked up as the official languages. This issue is more related to the identity politics of J&K. Emotionally, Gujjars are hurt because of the lack of recognition and respect.”

Poor policy and administrative challenges
While the State Reorganisation Act of 1956 led to the creation of states on linguistic lines, the issue of language homogeneity and selection of official languages (both at the state and central level) has been a contentious issue in a multi-lingual India. There has always been clashes and divide between the linguistic minorities and the linguistic majorities. Efficient language planning, especially from an administrative point of view, thus becomes critical for the functioning of the state. The case with J&K becomes even more complicated because it involves a central government deciding official languages for a state. Central government not only brought this policy without careful planning, but consultation with the linguists and experts from the region was also lacking. Kashmiri, even as spoken by over fifty-three per cent, has its functionality restricted to the home/family domains. Dogri, which has the same script (Devnagari) as Hindi might lead to confusion in the official use.

Language and Identity Politics
In a multicultural society, the relationship between language and identity is complex. Language is not only associated with the policy or legislation but also with cultural identity and the rights of the minorities. It has a bearing upon the power dynamics between communities. The inclusion of two regional languages from the Sixth Schedule as the official languages has sparked identity politics in the region. The excluded feel ignored.

Removal of Urdu and the Inclusion of Hindi: It is political
Urdu was adopted in 1881 as the official language of the court by Dogra Maharaja Pratap Singh to replace Persian. The Government of the erstwhile state of J&K adopted Urdu as the sole official language in 1954. Although less than one per cent speaks Urdu, it has served as the link-language between Ladakh, Jammu, and Kashmir region. The inclusion of multiple languages will lead to the marginalization of Urdu as the link language.

The government’s decision of including Hindi as one of the official languages despite it not being the native language of any ethnic group is problematic. The people of J&K fear that this would marginalize their own languages and dilute of their linguistic identities. The visionary language planning by the constituent assembly of J&K in the sixth schedule of the constitution gave representation to various ethnic languages in a fair and equal manner. It was framed keeping in view the complex multi-lingual groups of the state and to link them through Urdu for administrative use. The J&K Language Act (2020) appears to be a political move by the regime to emotionally appease the Kashmiri Hindus and the Dogras in the Jammu region, a crucial vote-bank for the BJP. Even though the protests have subsided, for now, it has to be seen how the implementation of this legislation will pan out, given the associated administrative challenges; and whether the protests would be revived in the implementation phase.

The Gupkar Declaration: Vociferous Valley and an Indifferent Jammu
The Naga Peace talks: Caught in its own rhetoric, NSCN(IM) will lose its stakes
Comment