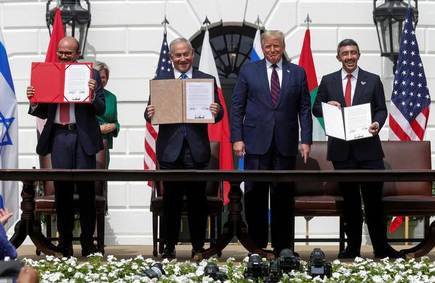 The Arab-Israel conflict, like the Middle East, is complex with unforeseen friendships, animosities and cross-cutting dynastic and leadership shifts, all engulfed by historically clashing ideologies and religions. Similarly, recent development is polygonal. For many years Arab countries banded together against the state of Israel. Recently, some have been rethinking their policy. Some are even making it official.

Conflict this Year
The new chapter of the Arab-Israeli peace process began with the President of United States Donald Trump unveiling the much-awaited and much delayed “deal of the century” on 28 January 2020. After a few months, on 14 August, the United Arab Emirates became the third Arab country and the first Gulf country to normalize relations with Israel. A month later, on 15 September, Bahrain followed suit with Saudi Arabia’s acquiescence. On 23 October, the transitional government in Sudan signed an agreement with Israel. Finally, on 10 December, Morocco normalized relations with Israel. Although the Abraham accords are far from a comprehensive Middle Eastern peace deal, it is nevertheless momentous. The development may not be a comprehensive Middle Eastern peace deal, but it is a momentous breakthrough in the decades-long Arab-Israeli peace process. It signifies formal political, diplomatic, technological, and multisectoral cooperation between the region’s two largest economic powerhouses.

Second, the accords are a significant policy shift. Since Israel expelled around 750,000 Palestinians in 1948, sporadic Arab-Israeli wars became commonplace. In 2002, the Arab League said that “no normalization with Israel would be possible without an end to Israeli occupation and an agreement on establishing a Palestinian state along the 1967 lines”. The Abraham accords are a significant departure from this pan-Arab position and reflect Palestinian statehood’s growing irrelevance. Past peace plans required a resolution of the Palestinian issues to establish peace and bilateral ties between the Arab states and Israel. The establishment of Arab-Israeli ties goes against this traditional understanding and ends the collective regional arrangement for peace.

Third, the crumbling of Arab unity. The accords reveal the breakup of Arab unity due to conflicting geopolitical, national interests. Nothing makes friends like a common enemy – in this case, it is the Islamic Republic of Iran. Describing the recent developments as “unforeseen” would be a folly. In recent years, evident signs of Israel’s warming ties with the Arab states that share the enmity towards and fear Iran have been evident. The Palestinian cause has lost its power over the Arab world. Middle Eastern politics is reshaping and transforming from the Palestinian issue to the battle against Iran. The Arab world is now split into Iran’s supporters and opposers. Over a year ago, an Israeli minister made a surprise visit to the UAE; during which the Israeli delegation even sang the Jewish sabbath. Similarly, the bromance between Netanyahu and Iran’s arch-rival Saudi Arabia’s Crown Prince Mohammed Bin Salman is no secret. Bilateral visits and overt and covert cooperation between the Jewish nation and the Muslim countries have occurred. The normalization has been happening quietly for many years, but now it is out in the open with USA’s blessings. So, why now?

What is in it for the states?
For the Arab states that are signatories to the Abraham accords, it is good for trade and relations with the US. For some, including UAE, it means isolating Iran. For others, like Sudan, it is a mixture of economic interests, US pressure and incentives. Khartoum will be de-listed from USA’s State Sponsor of Terrorism list, thus availing the much-required international investment that could address the country’s spiralling inflation. As per Sudan’s Central Bureau of Statistics, Sudan’s annual inflation peaked to 212.29 per cent in September 2020 from 166.83 per cent in August. With the de-listing, Sudan will be relieved of its debts under the World Bank’s and International Monetary Fund’s Heavily Indebted Poor Countries (HIPC) Initiative. For Morocco, it means US recognition of Morocco’s sovereignty over Western Sahara; a region which is mired in a decades-old territorial dispute between Morocco and Algeria-backed Polisario Front (the latter is a breakaway movement attempting to establish an independent state in the territory). For Israel, it means strengthening and solidifying its position in the Middle East and establishing itself as an unquestionable regional power. For Netanyahu, the rapprochement is a major foreign policy achievement which will garner domestic political mileage to recapture complete control over Israel’s Prime Minister-ship. But for the Palestinians, it is a betrayal.

The US angle
The Accords furthers USA’s isolation policy towards the ‘regional de-stabilizer’ – Iran. The Trump administration leaves no stone unturned in influencing the next four years under the incoming US President Joe Biden, as the latter had previously expressed his desire to revive the Iran-nuke deal or the JCPOA. However, Biden cannot reverse or repeal normalization deals and would be forced to work with the new reality. The US interest in resolving the Gulf Crisis or the Qatar blockade can also be appraised in this context; wherein the resolution would favour US’ regional interests. Domestically, the accords were appeasement for the white Evangelical Christians, a significant vote bank of President Trump.

Perspectives in 2021: The Arab world’s changing perception of Israel

Saudi Arabia’s dilemma
The new generation of Arab leaders such as Saudi Arabia’s crown prince Mohammed bin Salman (MBS) is not as attached or committed to the Palestinian cause as their predecessors such as Saudi King Salman. This further, features as a chief factor in Saudi Arabia’s dilemma. Additionally, MBS is invested in creating a global image of a modern leader. However, a deal between Netanyahu and MBS will not be an easy sell to many in the region. The custodian of the two most holy sites of the Muslim world – Mecca and Medina – may find it harder to justify such an establishment of formal ties with the state of Israel, as it would go against Riyadh’s rhetoric of being the bastion of the Ummah, the Muslims. Although following several days of conspicuous silence regarding the UAE-Israel normalization, Saudi Arabia’s Foreign Minister Prince Faisal bin Farhan ruled out a similar deal with Israel; the FM later revealed that Saudi was the first Gulf state to put normalization with Israel on the table. By setting a precedent, the recent accords have raised the prospect of similar accords with Saudi Arabia. Previously, President Trump’s Advisor and son-in-law Jared Kushner said that some Arab states were sorry they couldn’t be the first to normalize relations with Israel. Kushner’s statement could signal a potential Israel-Saudi normalization.

Will the accords lead to peace?
World over, analysts are debating the probability of the accords being an end to a future Palestinian state. The deal undoubtedly weakens the Palestinian leaders’ position to negotiate a peace deal with Israel and makes it harder to undo decades of occupation; meanwhile, creating an urgent need for reconciliation between intra-Palestinian factions. However, the region has witnessed various levels of resistance to the new wave of normalization. Furthermore, Abraham accords have contributed to the polarization of the Arab world by siding with Israel and Saudi against Iran’s bloc, which includes Turkey and Qatar. Although some may contest it, the deal of the century is successful as evident from the four normalizations. It has paved the way to the larger resolution of the Arab-Israeli conflict. However, it will not necessarily lead to larger regional peace as the primary goal of the ‘deal of the century’ is the containment and countering of Iran and not Middle Eastern peace. No deal will lead to prolonged regional peace without addressing the Palestinian issues. While analysts speak about positive peace, a mere negative peace would prove substantial achievement in the current scenario. Nevertheless, the Trump-Jared Abraham Accords will go down in history as one of USA’s landmark foreign policy achievements, sadly at the Palestinians’ expense.

Research Consultant with the School of Conflict and Security Studies at NIAS. She is currently based in Doha, and her research interest include Middle East politics, conflicts and peace processes

France: Needs to rethink the state-religion relation in battling extremism
RIP Sardar Buta Singh, the architect of Rajiv-Farooq Accord of 1987 | The Dispatch Zafar Choudhary
Comment