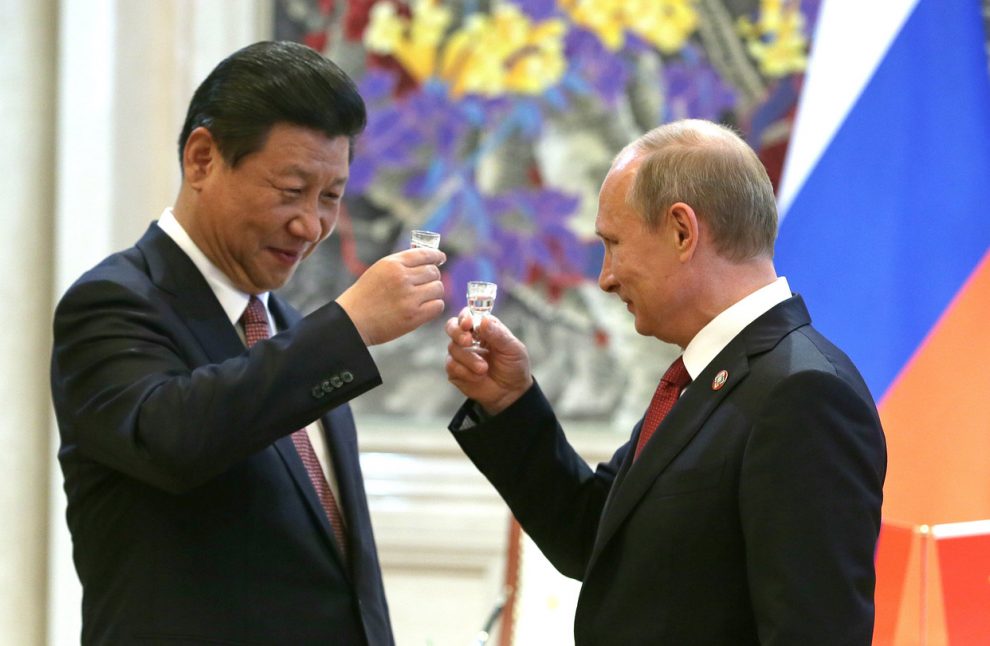 The China-Russia relationship has historically been punctuated by epochs of cooperation and bitter political-military rivalry since the Cold War. In recent years, the West’s attempts to isolate Russia after its Crimean annexation drove the country towards China, as Moscow sought to balance deteriorating ties with Washington and Brussels. US policies of sanctioning Russia coupled with the US-China trade war have given both revisionist powers common grievances with the US. Their shared aversion of the US-dominated international order has pushed them into a substantive, dynamic, and ‘comprehensive strategic partnership for a new era’. Amidst restrictive Western sanctions, Moscow began expanding trade ties with China, with a focus on exporting defence equipment, giving rise to an unprecedented level of comfort in Sino-Russian ties.

While China has a booming economy which has recorded growth (although at a reduced rate) even during the current downturn in the global economy, Russia is facing an economic crisis exacerbated by the pandemic. China today enjoys a competitive edge in value-added goods like arms and technology, and has already replaced Russia as the world’s second largest arms producer. As China becomes increasingly sophisticated and moves higher on the value supply chain, Russia’s reliance on it is bound to rise.

More importantly, Beijing is Moscow’s largest trading partner and export destination. Russia’s exports to China account for as much as 12.4 per cent of its total exports. In contrast, China’s exports to Russia comprise merely 0.8 per cent of total exports. Russia’s economic interest in the relationship is therefore much higher than China’s, whose interests are limited to oil and gas exports and access to Russia-controlled shipping routes. Moscow’s weakened global position has allowed Beijing to negotiate deals to its advantage. The US$ 400 billion Power of Siberia pipeline project, for instance, offered Beijing a discounted rate and partial ownership of the pipeline infrastructure.

Moreover, China has stepped in to fill the gap left by withdrawal of Western financing. It is providing loans worth billions of dollars in exchange for oil and partnership in Arctic projects—like the Yamal LNG project. Amidst the West’s efforts to isolate Russia, the country has found a necessary partner in China. Any damage to their trade ties could prevent Moscow access to its most important export market and would be a disastrous outcome for Russia. As the economic disparity grows, China will be able to command incredible influence as an indispensable buyer, leaving Moscow with few diplomatic options to protect its interests vis-à-vis Beijing.

Russia’s experience under China’s Belt and Road Initiative (BRI) has not met its expectations. Instead of initiating a new chapter in Sino-Russian ties, the high-risk-and-low-reward BRI projects have failed to deliver as promised amid multiple delays and cancellations. Of the 200 projects announced in 2009, less than 10 per cent actually progressed. Only six of the 20 special economic zones created in the Far East attracted Chinese investments, which equaled merely US$ 38 million. Strategic caution among both Russian and Chinese financiers has prevented Russia from securing investments. This indicates a limit to their warming ties. Although Moscow may offer some strategic advantages, it cannot be a major market, a profitable investment destination, or offer an edge in advanced technologies to China. Rather than substantive and tangible cooperation, their economic collaboration in the region is little more than a status-seeking venture.

Notwithstanding strategic convergences, Russia and China have diverging national interests in other regions including Central and East Asia, Russia’s Far East, the South China Sea (SCS), and the Arctic.

Recently, China has recalibrated power dynamics in Central Asia. Beijing has carefully leveraged its economic strength to expand political influence. It has also enhanced activities in the Arctic—traditionally Moscow’s strategic bastion—while Russia has done comparatively little to enter China’s backyard, East Asia. In the SCS, Chinese pressure to halt all activities have harmed Russian interests, with Russian companies forced to suspend drilling operations with Vietnam. Meanwhile, Chinese presence in Russia’s Far East, perceived as its territorial expansionism, has become a source of resentment in the region. Russia and China are unaligned on India, with Moscow denying Beijing’s requests to halt arms exports to New Delhi.

Russia will remain concerned about President Xi Jinping’s talks of a Chinese “rejuvenation” and return to medieval glory that inevitably puts their interests in conflict. Neither power will be willing to compromise its core national interests and power aspirations. Additionally, as China-Russia relations become increasingly lopsided, the disparity in their abilities will push Moscow towards subordination. Much of President Vladimir Putin’s authority comes from his strongman image and promise of restoring Russia as a great power. It thus seems unlikely that Moscow would consent to being a ‘junior’ partner with a peripheral global role. Rather, it will attempt power parity, if not dominance, in the partnership. This makes both states poised for a future of friction.

These factors will place limits on China-Russia cooperation. Therefore, although their synergy may appear to be an axis-forming exercise in light of a gradually developing new Cold War, bilateral ties are significantly vulnerable to strategic constraints and uncertainties.