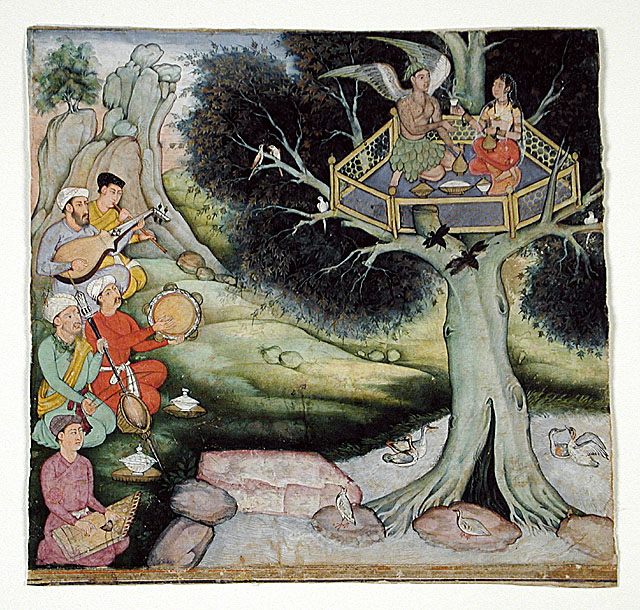 THE ELIXIR OF A STORY

When Parvati’s irresistible allure churned like Mount Mandara in the ocean of Shiva’s mouth, the story that emerged was amrita; whoever respects this elixir and eagerly imbibes it will achieve unimpeded knowledge and high status with Shiva’s grace.

This promise of elevation through the benediction of the story is established at the very beginning of Somadeva’s Kathasaritsagara. In fact, telling a story or listening to it is believed to be an act of transcendence in most cultures. For example, in Hindu belief, the Vedic goddess of speech, Vac (identified with Saraswati) inspires all seers, poets, and storytellers. She brings joy through verbal expression and makes those whom she loves wise; the Qur’an says, ‘So relate the story: perchance they may reflect’ and in the New Testament, Jesus’s parables are considered his word.

A story not only connects people to the divine, but it also lends meaning to their earthly existence. It encapsulates a society’s histories and provides paradigms for life and relationships. While giving each individual a sense of belonging, it also widens his or her horizons. In other words, stories are a source of knowledge—knowledge that penetrates ignorance. In Hindu traditions, ignorance is the greatest sin; hence, ultimately, a good story cleanses one of sin.

The pedestal of the Kathasaritsagara—the ‘Kathapitha’—establishes the premise of how liberating a story can be.

One day Parvati asks Shiva to tell her a new story. Shiva then tells her a story that has seven wondrous tales about the vidyadharas (semi-divine beings who hold knowledge of mantra and tantra). However, when Shiva is narrating these tales to Parvati in a private grove, one of Shiva’s ganas, who has made himself invisible, enters the grove and also hears the narration. This gana, Pushpadanta, then goes home and tells the amazing story to his wife, Jaya, who is Parvati’s doorkeeper; and she, in turn, not knowing where her husband heard the story, narrates it back to Parvati. When Parvati discovers that Pushpadanta entered their private glade and heard the tales, she is so infuriated that she curses him to be born on earth; and, when his friend, Malyavana, comes to plead his case, Parvati curses him as well. Then, feeling pity for them, she tells them that they will be liberated, but only when Pushpadanta, as the mortal Vararuchi, tells this story to Kanabhuti, a yaksha who was cursed to turn into a pishacha (ghoul). He will then relate it to Malyavana, born as Gunadhya, and Gunadhya will tell it to the world.

However, the telling of this story is not so easy for Gunadhya. On earth, due to a series of events, he is forbidden to use any of the commonly spoken languages: Sanskrit, Prakrit, and Apabhramsha (dialects developed from Prakrit languages; literally, it means ‘corrupt’). Yet, the story he is carrying must be told; hence, he learns another dialect—a secret tongue—Paishachi, the language of pishachas, and he writes his manuscript in it, using his own blood as ink. His students then take the manuscript to the Satavahana king so that he can help spread the story, but that king rejects it in disgust: ‘Seven lakh shlokas and written in blood in a crude language—such a pishacha story be damned.’

The king falls sick. His chefs have been serving him dry meat, because the animals in the forest have stopped eating and drinking; they are enchanted by a story that an ascetic has been narrating in the forest. This ascetic is Gunadhya, who, insulted by the king’s rejection of his tour de force, has been reading each page aloud and then burning it. The Satavahana king rushes to the forest in regret, but, by this time, Gunadhya has burnt all but the last story of one lakh shlokas. The Satavahana king takes this remaining story, which is about a vidyadhara hero named Naravahanadatta, and spreads it in the world. Thus, Pushpadanta and Malyavana are liberated from their curses, as is Kanabhuti.

THE LOST UR TEXT

This story that Gunadhya composed, most likely around the first century CE, was called the Brihatkatha (the Great Story). But this text is lost. Early scholars also believed that Gunadhya himself was fictitious. However, from various references in contemporaneous texts, it has become evident that Gunadhya may actually have been a real person. He was probably an official in the court of one of the Satavahana kings (Hala or, perhaps, Satakarini) and belonged to Pratishthana, the capital of the Satavahana kingdom. He was of mixed blood and was the son of a Brahmin mother and a Naga father. This lends credence to why his work may not have been accepted in Aryan society because the Satavahana kings were not only practitioners of Brahmanical sacrifices, but were also pushing to formalize Sanskrit as their court language.

However, it is indisputable that the story which Somadeva uses as the pedestal of his magnum opus is based on the origination of this Ur text. In fact, his Kathasaritsagara is an adaptation of the Brihatkatha. He himself states in the epilogue:

Whatever is in the original text—Brihatkatha, I have compiled here. There is no deviation. I have only shortened some long tales and changed the language (from Paishachi to Sanskrit). As far as possible, I have protected the accurate tradition of the original text, and, although I have added some new stories, I have not corrupted the flavour of the original. My interest in this is not to gain status or fame as a scholar. My purpose is to ensure that this conglomeration of stories is remembered.

Paishachi, the language in which Gunadhya wrote the Brihatkatha, is also lost. It is figuratively considered the language of the ghosts. However, there is evidence in ancient texts such as the Mahabharata and Panini’s Ashtadhyayi, that the pishachas were an actual tribe. Paishachi may have been a Prakrit dialect spoken by a tribe in the northwestern region of the subcontinent, or it may have been a tribal Prakrit spoken by inhabitants of the Vindhya Mountain. It is on the Vindhya that Gunadhya professes to have heard Paishachi.

Some scholars also surmise that Paishachi may have been a dialect of travellers and traders; people who came from different regions and spoke different languages, and had, ‘perforce to communicate with each other’. Considering the mercantile interests of the Satavahanas and also the vast number of stories in the Kathasaritsagara that are related to traders and merchants travelling to lands far and wide, which, more than likely, were also part of the Brihatkatha, it is quite possible that Paishachi was born in the trading ports.

It is estimated that the Brihatkatha was known till about the twelfth century CE. One reason for its disappearance may have been its context of forest life, which was quite removed from the developing urban society of the Aryans elites, who may have opposed it and prevented its promotion. Also, by this time, Somadeva’s Kathasaritsagara had become quite popular, and it is possible that this adaptation made the Ur text redundant and, eventually, pushed it into obscurity.

Excerpted with permission from The Kathasaritsagara of Somadeva: A Retelling, by Meena Arora Nayak, Aleph Book Company. Read more about the book here and buy it here.

The Dispatch is present across a number of social media platforms. Subscribe to our YouTube channel for exciting videos; join us on Facebook, Intagram and Twitter for quick updates and discussions. We are also available on the Telegram. Follow us on Pinterest for thousands of pictures and graphics. We care to respond to text messages on WhatsApp at 8082480136 [No calls accepted]. To contribute an article or pitch a story idea, write to us at [email protected] |Click to know more about The Dispatch, our standards and policies
TagsAleph Book Company Meena Arora Nayak Somadeva The Kathasaritsagara