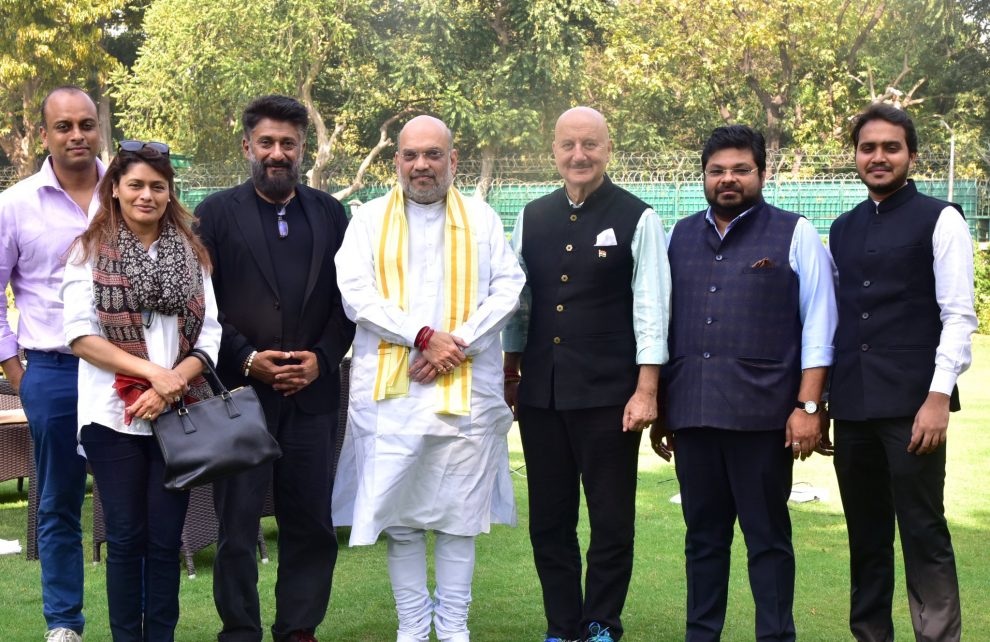 Jammu: Union Home Minister Amit Shah on Wednesday described “The Kashmir Files”, a Bollywood film based on the exodus of Kashmiri Pandits from the Valley in the 1990s, as a “bold” representation of truth, and said it will help make the society aware that such “historical mistakes” are not repeated.
The remarks by Shah came even as the PDP president Mehbooba Mufti, a former chief minister of Jammu and Kashmir, claimed that the “aggressive” manner in which the Centre is promoting the movie and weaponising the pain of Kashmiri Pandits makes its ill intention obvious.

After the film’s makers and actors, including Vivek Agnihotri, Anupam Kher and Pallavi Joshi met him in Delhi, the home minister also said the movie brings out the “unbearable pain and struggle” of the community before the world.

Interestingly, Chattisgarh Chief Minister Bhupesh Baghel invited all the MLAs of the Congress-ruled state to watch the film at a mall in Raipur.

Assam Chief Minister Himanta Biswa Sarma announced that government employees will be given a half-day special leave to watch ‘The Kashmir Files’, while AIUDF president Badruddin Ajmal sought a ban on the film claiming it will promote communal tension. Sarma said as Assam, also a BJP-ruled state, does not have any entertainment tax, the question of waiver does not arise.

In the national capital, the Special Branch of the Delhi Police asked the DCPs of all districts to make adequate security arrangements in mixed population areas to maintain law and order situation following the screening of the movie, according to an official letter.

The Kerala unit of the Congress, which is under attack from the BJP over its comment on the film, alleged that the Sangh Parivar forces “misinterpreted and misused” its tweet on the issue.

The union home minister posted on Twitter his picture along with the film’s team and congratulated the members.

“Today, met #TheKashmirFiles team. The truth of the sacrifice, unbearable pain and struggle of Kashmiri Pandits who were forced to leave their home in their own country has come to the notice of the whole world through this film, which is a very commendable effort,” Shah tweeted in Hindi.

Shah said “The Kashmir Files” is a bold representation of truth and it will work to make the society and the country aware in the direction that such historical mistakes are not repeated.

Later, Kher expressed his gratitude to the home minister for abrogation of Article 370, which gave special status to J and K.

“Respected Home Minister @AmitShah sir! Not only on behalf of the #KashmiriPandits community but also on behalf of the team #TheKashmirFiles, I got the opportunity to express gratitude to you at your residence for your tireless efforts to remove #Article370,” the actor tweeted in Hindi.

“Your consistent efforts for the human rights of Kashmiri people and security forces is commendable. Your vision for a peaceful and prosperous Kashmir will strengthen humanity and brotherhood. #RightToJustice,” he tweeted.

In Srinagar, Mehbooba Mufti said instead of healing old wounds and creating a conducive atmosphere between two communities, the Centre is deliberately tearing them apart .

The manner in which GOI (government of India) is aggressively promoting Kashmir Files & is weaponising pain of Kashmiri Pandits makes their ill intention obvious, Mehbooba wrote on Twitter. .

Congress leader and Leader of Opposition in the Kerala Assembly, V D Satheesan, said the tweet by the party’s state unit on Kashmir was meant to say that all sorts of atrocities in the Valley should be ended and the issue should not be handled in the name of religion or caste.

“But it is being misused in Delhi. The Sangh Parivar forces misinterpreted it,” Satheesan told reporters in Thiruvananthapuram, responding to a query on the BJP’s attack on the Congress in Parliament over its controversial tweet through the twitter handle of the party’s Kerala unit.

An association of Kashmiri students in Uttarakhand expressed apprehensions that the “disturbing video clips” emerging from different theatres screening The Kashmir Files’ could lead to targeting of students of a particular community, especially those from J and K studying in different parts of the country.

“The onus of any unprovoked attempt of hate, physical, verbal abuse aimed at students from the Union territory of Jammu and Kashmir will be on the director of the film,” the spokesman of J-K Students Association Nasir Khuehami, who studies in a college in Dehra Dun, said in a statement.

Maharashtra Deputy Chief Minister Ajit Pawar rejected the demand of BJP legislators to make the film tax-free in the state, saying if the Centre waives GST on the movie, it will apply to the entire country.

Replying to a debate on the state Budget in the Legislative Assembly, Pawar, who is also the state’s finance minister, said the central Goods and Services Tax(GST) and the state GST are 50 per cent each.

“The issue in the film is about Kashmir. Prime Minister Narendra Modi has spoken about the film in Parliament. If the central GST is waived, the tax waiver will apply to the entire country,” he said.

Enraged by Pawar’s statement, the BJP legislators staged a walkout.

The BJP on Tuesday had submitted a memorandum signed by 92 of its MLAs to declare the movie tax-free.

Amid the opposition BJP’s demand for a tax break to the film in Chhattisgarh, Chief Minister Baghel said the Centre should waive the GST on the movie so that it becomes tax-free in the country.