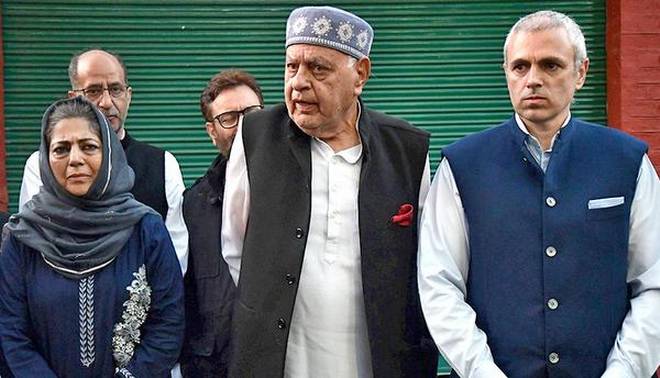 On 15 October, the signatories of the Gupkar Declaration announced the formation of “People’s Alliance for Gupkar Declaration.” The decision was taken in a meeting convened by the President of J&K National Conference, Farooq Abdullah after Mehbooba Mufti was released from fourteen-month detention under the Public Safety Act. The alliance seeks to “restore the special status of the erstwhile state of J&K”.

The Gupkar Resolution: A brief background
Last August, the mainstream political parties of J&K – People’s Democratic Party (PDP),  J&K National Conference (NC), J&K People’s Conference, Communist Party of India (Marxist), Awami National Congress, Indian National Congress, and J&K People’s Movement — signed the Gupkar Declaration one day before the abrogation of Article 370. The parties demanded “protection of the autonomy, identity and special status of J&K” and that “any modification or abrogation of A-370 would be considered as the aggression on the people of J&K”.
However, two signatories of the Gupkar Declaration, Awaami Ittehaad Party and the Indian National Congress skipped the 15th Oct meeting.

Second, there is a lack of support for the declaration from the Jammu region. Even though there is a strong presence of the two main regional political parties (PDP and NC) there is no support from the leaders of Jammu. This reflects the lack of coherence between the two regions.

Third, the relevance of political parties of J&K on the ground has been lost. After the coalition between the People’s Democratic Party and Bhartiya Janta Party (BJP) was dissolved and the governance was in the administrative hands, the political activity in the region remained more or less redundant. Mehbooba faced a major backlash from the masses that were unhappy with her decision of forming an alliance with BJP.

Abrogation of A-370 has led to damage to the Kashmiri mainstream politics that revolved around the idea of ‘Kashmiri Identity’ after 1947. The long political vacuum in the UT resulted in the erosion of the political relevance of mainstream parties, especially the PDP and the NC. The mainstream leaders do not know what to offer to the masses anymore. The restrictions, preventive detention, and house arrests of the mainstream leaders have also led to the political inaction in the UT from the past one year. The people of the valley feel ‘betrayed’ and have a trust deficit with the leaders.

The silence of Jammu on Gupkar Declaration
Historically, the Dogras of Jammu have always kept quiet about the debate of A-370 since the 1950s. They were against the ‘special status’ of the Kashmiri identity from the beginning. The split was always prevalent. The Gupkar declaration has faced a major backlash from Jammu as it is largely viewed as a ‘political gimmick’ of the mainstream Kashmiri political parties.
The cultural and geographical divide in Jammu has been strong. The multiethnic and multicultural Jammu consists of the Dogras, Punjabi Hindus, Sikhs, Muslims, Paharis, Gujjars, and Bakkerwals spread across Jammu, Reasi, Ramban, Doda, Kathua, Rajouri, Poonch, Udhampur, Samba, and Kishtwar. The heterogeneous identity has contributed largely to the varied political opinions in the Jammu region. The Kashmir-centric political representation of J&K has always disregarded the pluralistic society of Jammu, giving rise to sharp identity politics. The lack of recognition of the various multicultural groups of Jammu has resulted in the lack of the ’emotional connect’ with the Kashmiri political leaders over the Gupkar Alliance.

What next in J&K?
The Gupkar Alliance has once again revived the political battlefield of J&K politics after a year. The lack of political coherence between the two regions and a ‘lukewarm’ public response to the Gupkar will make it difficult for the alliance to achieve the aim of “return[ing] to the people of the state the rights they held before August 5, 2019”. This will require a long commitment and a strong political mobilization on the ground, which might lead to another round of detentions of the leaders.

The future course of action of the Gupkar Alliance will indicate whether the leaders are ready to walk on a tough path ahead or will they find a middle-path along with New Delhi to save their political careers. There is a long history of the mainstream Kashmiri parties eventually giving in to the demands of the centre which always had an ‘upper hand’ in the politics of J&K post-1950s on the issue of ‘special status’.

J&K: Flag, Constitution, Media Freedom and Local Elections
The new demands within the State over the Official Language Act
Comment