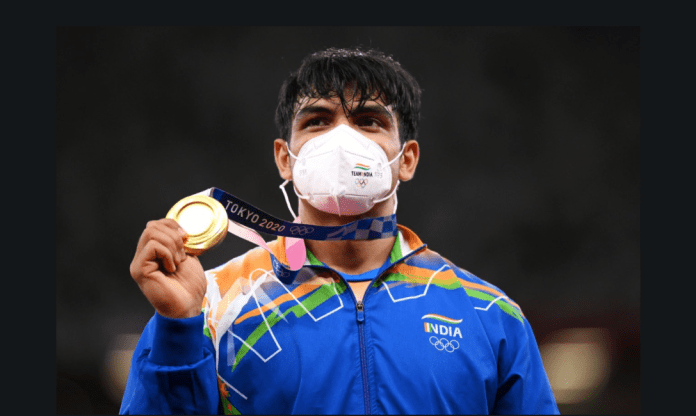 Neeraj Chopra has won a historical gold medal in the men’s javelin throw at Tokyo 2020 Olympic. And With this, the 23-year-old has become the first Indian athlete to win a gold medal in track and field events. Chopra finished on the top spot in the qualification rounds with a stunning throw of 86.65m.

In the finals, he continued his stellar performance and became the first-ever Indian athlete to win a gold medal in athletics at the Olympics. A staggering throw of 87.58m in the second attempt was far better than the other 11 athletes which earned Chopra the historical gold medal for India. Czech Republic’s Jakub Vadlejch won silver with 86.67m and Vitezslav Vesely claimed the bronze with an 85.44m throw.

Neeraj Chopra’s closest competitor, world No.1 javelin thrower, Johannes Vetter was out of the competition after three attempts. With this Gold, the Number of medals won by India in Tokyo is now seven. One gold, two silver, and four bronze.

PM Modi in a tweet congratulated Neeraj. The tweet said, “History has been scripted in Tokyo! What Neeraj Chopra has achieved today will be remembered forever. The young Neeraj has done exceptionally well. He played with remarkable passion and showed unparalleled grit. Congratulations to him for winning the Gold”

Neera Chopra currently holds the national record for the Javelin. He has registered this record by an 88.07 m throw. He has also won gold at the 2018 Asian Games and the 2018 Commonwealth Games.