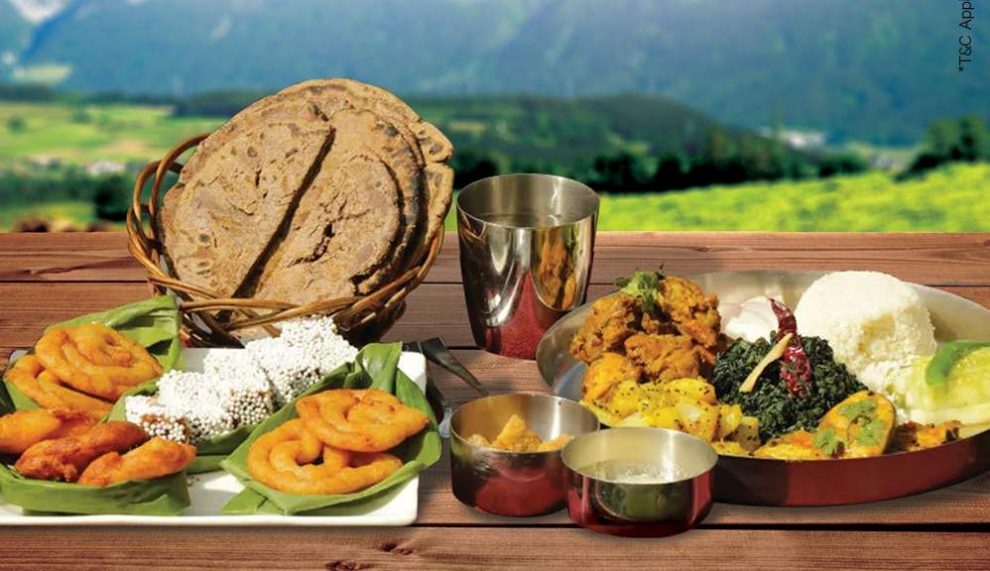 It is not for nothing that the Garhwal region of the Himalayas is referred to as deva bhumi, the land of gods. The topography and climate of this sacred land has spawned a rich biodiversity of flora and fauna, which is a natural heritage of the area. Water currents carrying rocks and herbs, fed by high-altitude minerals and vegetation irrigate the soils. Steep hillsides etched by terraced farms and, fed by mountain streams produce crops suited to their particular terrains. The diversity of crops resulting from the variations in elevation, differences in orientation and gradient, as also the velocity of winds and quality of precipitation they are exposed to is what gives to this area its environmental uniqueness.

The different crops provide rare nutrients that cannot be obtained from any single crop. Relying on elements such as sunlight, biomass from forests, and crop residues, farmers here have traditionally worked from an understanding of the ecological principles that underlie natural phenomena, to grow crops suited to their specific area. Respect for, and a connection with nature has led to the emergence of many important religious shrines along the confluences of major tributaries of the sacred river Ganga.

Since the choice of the food we eat is influenced and determined by the society and culture we live in, food in these hills, till recently, had not been driven by fashion or commercialization. For millennia, these hill people lived on whole grains and unprocessed fresh produce. Being connected to nature and the environment, they consumed that which nature provided in different times of the year, as that is what the body requires in those seasons. A combination of natural whole foods and physical exertion in this undulating region is what traditionally gave these people their sturdiness. Hill women are slender and strong as they move up and down the slopes like mountain goats.

Today, our ‘technologically advanced’ society has introduced abundant and easily available packaged, preserved foods that often call for no preparation. Heavy with unwanted fats and carbohydrates, these ‘empty foods’ result in the overfed and undernourished persons we encounter, especially in metropolitan areas. The hill people are also becoming victims of the smart inroads made by these foods resulting in sluggishness and uncalled-for fatigue, dull hair and skin, and other troublesome afflictions that can often be traced back to the food consumed.

Perhaps, it is a recognition of this fact that is turning our gaze on ancient grains and herbs that have nourished societies since millennia. We are well aware that macronutrients – carbohydrates, proteins, and fats – give us energy, build muscle, and strengthen our physiological equipment, which are necessary for the efficient functioning of our minds and bodies. But we often do not give enough attention to micronutrients – the vitamins, minerals, fibres, and trace elements – that are essential for the metabolization and absorption of the macros for their optimal functioning and becoming suitable for our bodies. Macronutrients are like fuel, which demands a clean and greased engine for proper combustion. Micronutrients are the grease and oil that not only maintain the cleanliness and smoothness of the engine, but actually break down the heavy macronutrients so that our bodies may absorb them easily. So, it is not just what we put into our mouths but how we process it that matters.

Our finely tuned bodies do not absorb macronutrients in the form they are received. Rather, by a complex metabolic process, they first break them down to their molecular forms and then re-form them into subtler varieties of carbohydrates, proteins, and fats – like amino acids, fatty acids, and glucose. These are the forms in which these nutrients are received by the trillions of super-microscopic cells and tissues that our bodies are made up of. It is the minute micronutrients that enable this breakdown of food, which otherwise would either pass out of the system undigested or block some of the subtle passages and cavities causing unwanted deposits. Micronutrients are what combine with the numerous bodily secretions and catalyse chemical reactions to promote ‘communication’ among the millions of cells, and enable the subtle nutrients to reach where needed, and/or make up a deficiency of one by taking up and converting energy from another. So, there is a riotous intelligent activity of breaking down, reconstitution, and absorption ceaselessly raging within our systems. The better supplied our system is, the more efficient this activity.

No one food can give us all the multitudes of micronutrients that are required for the breakdown and release of the macros. Hence, the need for diverse foods that Nature, in her abundance, supplies us with at different times of the year. While macronutrients can be stored in the body for some time, the delicate micronutrients have to be supplied regularly. The hills abound in seasonal foods that provide these nutrients according to the needs of the body, enabling it to cope with different requirements – keeping it hydrated in summer, warm in winter, etc.

RECIPE FROM THE BOOK

Jowar, another fibre-rich (gluten-free) cereal is coming into the limelight due to the many nutrients it has. High in protein and iron, it is also packed with minerals and micronutrients. Its magnesium content helps healthy bones. When paired with a good vitamin C supplement, the iron in it is absorbed more easily. Mathris are usually made with white flour (maida) and are deep-fried. As such, they tend to become a little heavy on the digestive system. Here, other than using flours that are wholesome and protein-rich, the mathris were baked instead of being fried. The use of flax and chia seeds, as binding agents, further adds to the nutritional potential of these mathris.

Add the soaked flax/ chia blend into the mixture. Use your hands to fold the mixture evenly through the dough. Add

Add it slowly into the mixture to bring the dough together. Knead it lightly till you get a nice doughy ball. (Sprinkle some water if the dough is too dry.) Preheat oven to 200°C.

Divide the dough into 1” diameter balls. Flatten the balls using your palms and fingers into about 2” round discs or mathris. Press 2-3 pieces of cracked peppercorn into the centre.

Place on a baking sheet in the oven for 15-20 minutes. Being dairy-free, the mathris last long in an airtight jar.

Other than being served as a snack these can also serve as a side dish with a soup.

Excerpted with permission from Vegetarian Cuisine from the Himalayan Foothills: Flavours and Beyond, Veena Sharma, Niyogi Books. Read more about the book here and buy it here.

The Dispatch is present across a number of social media platforms. Subscribe to our YouTube channel for exciting videos; join us on Facebook, Intagram and Twitter for quick updates and discussions. We are also available on the Telegram. Follow us on Pinterest for thousands of pictures and graphics. We care to respond to text messages on WhatsApp at 8082480136 [No calls accepted]. To contribute an article or pitch a story idea, write to us at [email protected] |Click to know more about The Dispatch, our standards and policies
TagsGarhwali Cuisine Niyogi Books Veena Sharma Vegetarian Cuisine from the Himalayan Foothills