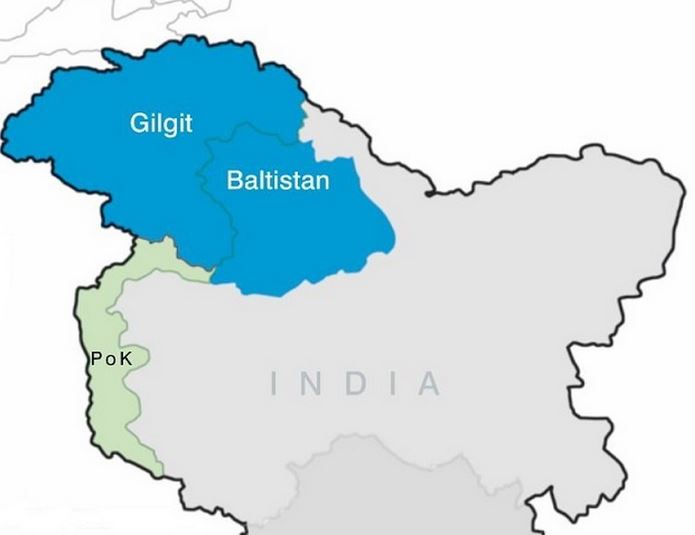 Pakistani Punjabi Prime Minister Imran Khan Niazi’s recent declaration of making Gilgit Baltistan as Pakistan’s “provisional” province as once again brought global attention to this mysterious region. While we Kashmiri people have detailed knowledge about Jammu region, Ladakh and Mirpur-Muzaffarabad (erstwhile constituents of the princely state of J&K), not much is known about Gilgit Baltistan in Kashmir valley. Gilgit Baltistan, which was formerly known as “Gilgit Agency” during Dogra Maharaja regime has always remained on the fringe of the imagination of Kashmiri people.

Gilgit Baltistan is a land that has nothing in common with the people of Kashmir, neither language nor culture. It is not even Himalayan region but a trans-Himalayan region and home to Karakoram mountains and K2, the world’s second highest peak. The region is home to three distinct ethno-linguistic groups – Shina, Balti & Burushaski/Wakhi representing Dardic, Tibetan and Central Asian Persian language families, respectively. The centuries of interaction between these diverse ethnic groups has evolved a distinct race of people, who are ethnically, culturally and linguistically closer to Central Asian regions, rather than to Punjabis, Kashmiris or Dogri communities of South Asia.

It was Dogra rulers from Jammu province, who basically integrated both Kashmir valley and Gilgit Agency as part of the single administrative unit called the princely state of Jammu & Kashmir in the middle of 19th century. The region is entirely Muslim and yet Muslims in Gilgit Baltistan are not a monolithic community. The region is home to followers of Twelver Shia faith, Ismaili faith and Noorbakhshia Sufi order along with mainstream Sunnis. This is incidentally, the only Shia – Ismaili majority region in an otherwise Sunni majority Pakistan.

During the unfolding of princely state of J&K in 1947 after Pashtun Kabaili raid of Kashmir valley, the local leaders of Gilgit Agency revolted against the Dogra Maharaja with the help of a British resident military officer and after imprisoning local Dogra Governor, they declared their independence, but were coaxed into merging with newly created Pakistan in the name of Islam. But this proved to be their biggest mistake.

The upper caste feudal Punjabi elite were more interested in ethnically Koshur speaking Kashmir valley and therefore after the UN ceasefire of 1948, Pakistan decided to keep the legal status of both Gilgit Baltistan and Mirpur – Muzaffarabad within Pakistan in abeyance till the Kashmir issue was “resolved”. The areas today known as Gilgit Baltistan was not made an official province of Pakistan as promised but instead its administration was given to a non-local official (mostly upper caste Punjabi) under the so-called Ministry of Kashmir Affairs via a highly unpopular “Karachi Agreement” in which local people were not taken into confidence at all.

These areas, which had no official name for nearly two decades were officially designated as “Northern Areas” in 1970s, which remained largely forgotten, while the spot light was always on Kashmir valley. Things changed, when Pakistani Punjabi ruling elite discovered the strategic importance of the region as Pakistan’s only land route to China. At first, Punjabi ruling elite “gifted” a large tract of Northern Areas called Shaksgam valley to China during the construction of Chinese built Karakoram highway, without taking local population into confidence.

Then came sectarian suppression of Shias and Ismailis which began under President Zia-ul-Haq that resulted in introduction of religious extremism and sectarian divisions in the region, which led to numerous incidences of target killing of Shias including the infamous 1988 “Gilgit massacre” in which thousands of Shias of Gilgit were murdered by state sponsored Pashtun tribesmen. This was followed by a deliberate policy to change the Shia-Ismaili majority demography of the region by scrapping state subject rule and allowing large scale settlements of Punjabi and Pashtun Sunnis. The Shia-Ismaili majority of the region was subsequently reduced from 85% of the total population of the region to 70% as it stands today.

The region was later renamed as “Gilgit Baltistan” in 2009 during Zardari government, at which time it also got a namesake legislature with powers less than those of a municipal corporation in which only mainstream political parties of Pakistan are allowed to participate. Any dissenting political voice is ruthlessly crushed by Punjabi dominated central agencies operating clandestinely in the region through many draconian laws.

The main demand of the people of Gilgit Baltistan has been to integrate them as formal province of Pakistan and its people be given voting rights in Pakistan’s national assembly elections and the region be represented in Pakistan’s national parliament through elected representatives. The Islamabad based Punjabi elite has largely been ignoring this demand as they believe that doing so will legally loosen their claim over Kashmir valley. In a way, Punjabi elite has kept the people of Gilgit Baltistan in a state of permanent limbo by attaching their fate to the resolution of “Kashmir issue”.

Very soon, the benefits of exploiting its strategic location and economic potential of the resource rich region was noticed by Punjabi elite and plans to exploit the same began, which eventually culminated in the form of signing of China Pakistan Economic Corridor (CPEC) project during Nawaz Sharif’s tenure, an agreement that is heavily loaded in favor of China and a “debt trap” for Pakistan, wherein under the garb of “investment in infrastructure”, China has provided mountains of loans to essentially create a sea route through Arabian sea for its land locked western region of Xinjiang to pass through Pakistan.

Things took a dramatic turn, when last year Delhi abrogated article 370 of Indian constitution, removed its special semi-autonomous status and formerly incorporated J&K as a formal administrative unit of the union of India. Apart from the expected opposition to the move by Islamabad, China suddenly became pro-active in the affairs of J&K partly to secure its investment in CPEC, which passes through Gilgit Baltistan and partly due to its ignited insecurity over “Aksai Chin”, a contested Eastern part of Ladakh, which remains under Chinese occupation for last many decades.

The fact that abrogation of article 370 additionally segregated Ladakh from J&K and made into a separate Union Territory has alarmed China regarding its investment in CPEC and its hold over Aksai Chin. China, which has been thus far resisting its direct involvement in any part of former state or present UTs of J&K and Ladakh has suddenly found Gilgit Baltistan as a strategic tool to secure Aksai Chin and its heavy investment in CPEC and therefore it has been putting pressure on Islamabad to formalize status of Gilgit Baltistan as a quasi-legal part of Pakistan. Islamabad, which has been resisting to do so, all these years, least it makes its claim over Kashmir valley “weak” has finally seem to have given in to Chinese demands under its global isolation and its growing economic dependence on China and the recent declaration of PM Pakistan to grant a “provisional” provincial status to Gilgit Baltistan is seen in this light

It is clear that the choice of Pakistan that their elders made in 1947 in the name of Islam doesn’t seem to be attractive anymore to the present generation of the people of Gilgit Baltistan, who won’t admit it openly out of fear of Pakistani Punjabi dominated security agencies operating in Gilgit Baltistan and fear of Chinese reprisal and are therefore forced to see themselves becoming slave of Punjabi elite, which is a slave of Chinese communist party, something which is akin to being slave of a slave. How long can a proud, brave and self-respecting mountain communities of Gilgit Baltistan tolerate this in the name of Islam is something that only time will tell.

The author is a young and prominent politician, Writer from Central Kashmir, who served as PRO to former CM of J&K. He is fighting DDC elections from Beerwah Constituency. He can be reached at [email protected] Views are personal.

Why so much hate for Kashmir Police?
The Second Revolution
Comment