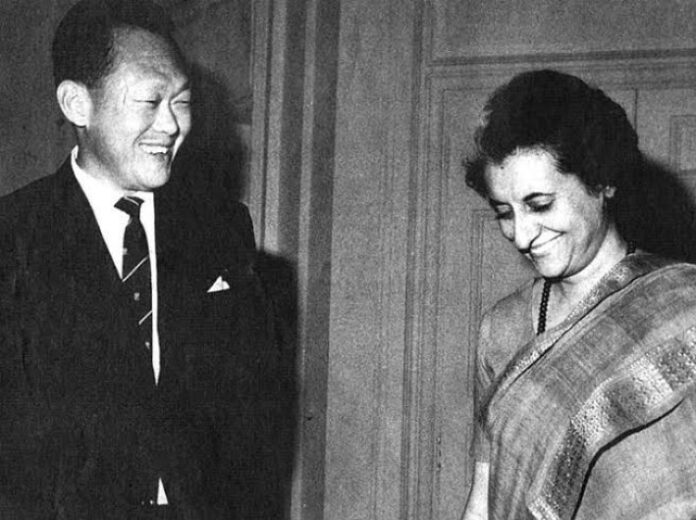 However, given the odds that she was working under, it will be fair to characterize Indira’s foreign policy as bold in conception and execution. If the test of a great leader is the ability and the will to take quick and transformative decisions, then too she qualifies eminently for the honour. That’s why the political icons of that time, ranging from Fidel Castro of Cuba to Yasser Arafat of Palestine, held her high in their esteem. Singapore’s first prime minister, Lee Kuan Yew, may have been echoing that high regard when he described Indira in this manner:

Indira Gandhi was the toughest woman prime minister I have met. She was feminine but there was nothing soft about her. She was more determined and ruthless a political leader than Margaret Thatcher, Mrs Bandaranaike or Benazir Bhutto. She had a handsome face with an aquiline nose and a smart hairstyle with a broad streak of white against a jet black mass of hair combed back from her forehead. And she was always dressed elegantly in a sari. She affected some feminine ways, smiling coquettishly at men during social conversation, but once into the flow of an argument there was the steel in her that could match any Kremlin leader.

It wasn’t just Pakistan that occupied her strategic calculus. The fact is that the 1962 humiliation of her father by China continued to rankle her. She was also acutely conscious of the fact that China was a nuclear power, recognized as such by the world, while India was not. As early as 1968—much before the 1971 war was in anyone’s thoughts—she had already started worrying about the long-term disadvantage for India due to this disparity. Haksar reflected this concern when he recorded a note in 1968 titled ‘Need for India in a Changing World to Reassess Her National Interest and Foreign Policy.’ In essence it advocated that India’s strategic calculus had to look beyond Pakistan to other potential threats; the principal of which could be China:

…the making of nuclear arms in the shape of medium range missiles (2,000-3,000 miles) capable, from sites within India’s frontiers, of striking with success not only a few chosen targets in Tibet but of ranging as far afield as the industrial heart of China in Manchuria and in the great river valleys south of it which include some of her principal industries and urban centres of population.

In that same year, the world had been divided into the nuclear haves and have-nots after the international community concluded the Nuclear non-Proliferation Treaty (NPT). But Indira waited for another six years before reacting on the ground to this nuclear apartheid. On 18 May 1974, Raja Ramanna, the director of Bhabha Atomic Research Centre (BARC), placed a call to PM Indira Gandhi to say, ‘The Buddha has smiled.’ India’s first nuclear test had been conducted in Pokhran on Buddha Purnima (Buddha’s birthday). It was the first confirmed nuclear test by a nation that was not a permanent member of the UNSC.

As expected, the Western world imposed sanctions on India. But the nuclear test had successfully breached the artificial ceiling that the five nuclear haves had built—that only they could be trusted to act responsibly with the ‘bomb’. The unstated axiom to that assertion was that the others, the have-nots, could not be trusted to act responsibly and hence must be dissuaded from following the nuclear path. The threat of sanctions was the deterrent that the group of five had employed with great effect so far. When India broke free of these chains and conducted the nuclear test, it did so in full consciousness of the fact that it would have to contend with the odium of the nuclear five— and more so because the test was conducted within three years of the Bangladesh war. But the Indian riposte to the barbs, somewhat amusing in retrospect, had irrefutable logic to it. The test, it was said, tongue firmly in cheek, was for ‘peaceful purposes’ because India needed to use the atomic power to blast out irrigation canals! An important factor that somewhat softened the Western reaction against India was the American preoccupation—and frustration—with the way the war was going in Vietnam. Moreover, the memory of their inability to stare down Indira during the Bangladesh war was still fresh for the Nixon-Kissinger duo.

If she was firm on these major concerns for India, there was flexibility and grace in Indira’s dealings with the smaller neighbours. With Nepal, for instance, she took the soft approach generally and dealt with the King courteously but with firmness when needed. There was also the recognition that India’s strategic resources, limited as they were, could not be stretched far beyond its borders. This was reflected in the response to a probing enquiry by Lee Kuan Yew:

When I visited India in 1970, I asked her [Indira Gandhi] whether India intended to extend its naval interests into southeast Asia? Their foreign minister Swaran Singh who was present intervened to say, India was interested in increasing economic ties but its greater interest was in keeping its western sea lanes open. I sensed that India’s primary defence concern was Pakistan, fearing a US-China-Pakistan line up.

Swaran Singh had astutely described the limits of India’s strategic reach, which, by and large, should continue to remain valid even now: That India’s greater interest was in keeping the western lanes open. Sensitive to the possibility that China, Pakistan and the US could become a potent grouping, Indira began to soften her approach towards the US. At first, though, the period after 1971 was marked by uncertainty in Indo-US relations; the Indian triumph in the Bangladesh war was viewed as a humiliation of sorts by the Nixon-Kissinger combine. The American misery was further compounded when it had to withdraw in defeat from Vietnam in the mid-1970s. Indira exploited the anti-American mood domestically by playing up, during elections, the fear of American interference.

But by the end of 1970s, she was ready for a course correction. She did not want India to be solely dependent on the Soviet Union. On its part, the US under Ronald Reagan was keen that a new opening be made towards India, to prise it away from too tight a Soviet hug. One sign of the thaw and the gradual warming of relations was the US agreement to provide dual-use technology to India.

"Tsarina": This intriguing novel details the journey of Catherine I of Russia from a young peasant girl to Empress
"The Yogini": This novel explores the mystic forces that run beneath the shallow surface of our modern existence