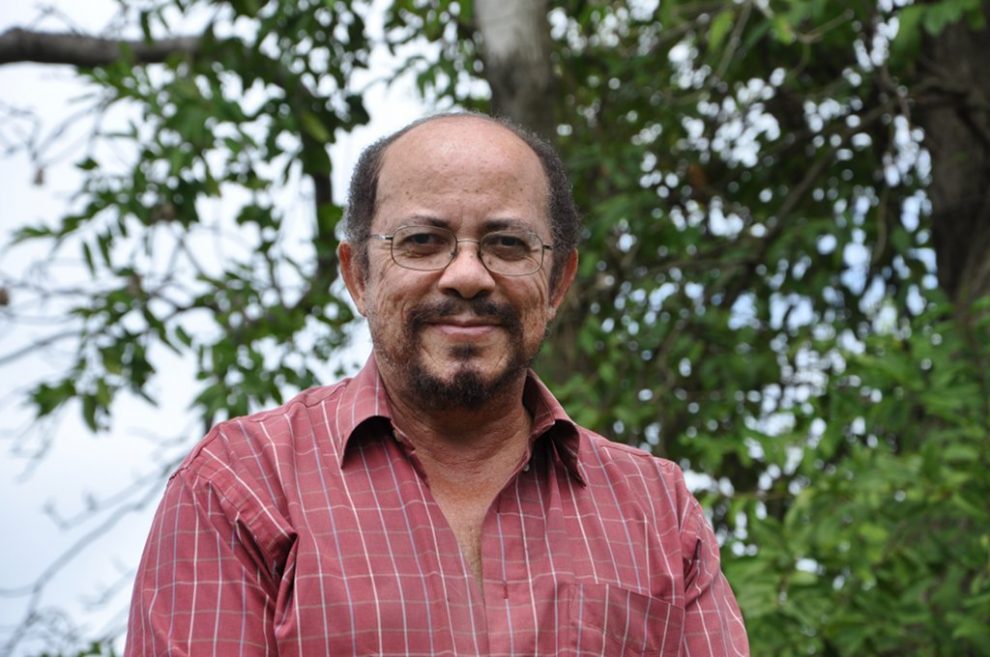 Editor’s Note: The following excerpt is taken from the ‘Translator’s Introduction’ from the book.

In the sugarcane fields, oh!

In those sugarcane fields…

They labour till their limbs

Weaken and are ready to fall.

The hearts of those Hindu women.

Isn’t there a way to reduce their sorrow?

Isn’t there a potion to lessen their pain?

They toil in those cane fields. (In the sugarcane fields…)

Raphaël Confiant is one of Martinique’s most prolific litterateurs who writes in both French and Creole. A militant proponent of Creole culture, this master storyteller delves into his island’s history to spin one of the most riveting of human sagas, peopled with truculent characters.

This island of Martinique which he celebrates is an overseas département of the Republic of France and is part of the arc of volcanic islands, called the lesser Antilles, nestled in the Carribean Sea between the two Americas. Originally populated by Arawak and Carib peoples, it was charted in 1493 by Christopher Columbus and became a French colony in 1635, when Pierre Belain d’Esnambuc founded the first French colony at Saint-Pierre. Sugarcane was first planted here in the seventeenth century and slaves were shipped from Africa to work on the plantations. When slavery was finally abolished in 1848, Indian and Chinese workers were brought in from the French and British colonies as indentured labour. They were paid weekly wages, provided housing and medical facilities and given a free passage to India at the end of their five-year contract. The descendants of those African slaves—who were now French citizens—looked down upon the Coolies—the Indian indentured labourers, who braved the inhumane conditions and remained resolutely attached to their language and culture. Guilt consumed them for having crossed the kaala paani as they pined to return to India.

La panse du chacal (literally translated as the Belly of the Jackal) first published in 2004, tells the story of the Dorassamy family and its migration to Martinique. The intrigue is embedded in three locations: drought- and famine-stricken India, steeped in caste and reeling under colonial oppression; the White Adder, the British ship with its British captain and crew, transporting the indentured labourers, where race and caste intermingle to everyone’s dismay; and, finally, Martinique, where the new Creole identity emerges out of the miasma of exploitation, interracial hatred and the angst of exile.

The story follows Adhiyaman, a former spinning mill owner Ambu Dorassamy’s son, who flees for his life and from Madurai after seeing a pack of jackals devour his parents. On reaching Pondicherry he marries below his caste and boards the ship to America, which after weathering terrible storms and surviving a smallpox epidemic reaches the coast of Martinique. The climate and luxuriant vegetation reminds him of home. He, along with his wife and two sons, toils in the fields from dawn to dusk for a pittance. On this island the Coolies are pariahs, the lowest of the low, who can be refused repatriation on false charges, whose women can be raped and whose children have no right to education. Meanwhile the intermingling of races in this strange land shocks them as they desperately try to preserve and hold onto their Tamil identity.

But one day, Indian emigration is outlawed. The fifty-fifth ship is the last one to bring Indians to Martinique. All ties with Mother India are snapped.

Today, more than 150 years later, the descendants of Coolies speak Creole, master the danmyé, the dance fight of the Blacks, revel in the Carnival and dance the biguine, mazurka, and bolero with gay abandon to the beat of the bèlè drum rather than the tappu-tambour. They are now Indian Creoles who may attend mass at church, a Hindu ceremony in a temple and also visit the African obeahman. They are not caged in a single monolithic identity, they are an exquisite mosaic of colours, races, cultures and languages.

Raphaël Confiant chooses to tell the story of the early Tamil emigrants in a potpurri of French, Creole and Tamil as an ode to his multilingual Martinique. He says, he grew up hearing Latin and Greek in church, Creole at home and in the street, French at school and a smattering of Arabic and Tamil on the streets. Creole remains his muse and he has even written a dictionary of Martinican Creole, patiently gleaning words from written texts, oral traditions but also the common parlance.* Confiant’s writing is a heady mixture of French and Creole, peppered with any other language that the story calls for. There is no culture without language, and without the sonorous Creole tongue—so vivid, flavourful, rich in colour and texture—Martinique will lose its soul. History and literature work together in the author’s world to nurture the memory of all these communities who came to weave their own special thread into the fabric of this rainbow island.

In La panse du chacal, Creole is used in conversations, Tamil is introduced largely through proverbs. British sailors speak pidgin English with the Coolies. Verses from the Upanishads, Manusmriti and Bhagavad Gita are quoted in French translation, albeit transcribed in the Roman script. There is never a dull moment in Confiant’s narrative. His language is a merry medley of classical French from the métropole—a turn of phrase typical of Martinique—a rare word or expression from medieval French, and neologisms whose meanings the reader must figure out from the context. Even his minor characters remain etched in the reader’s memory—be it Eugénie de Maucourt, Z’Oiseau, or Coucoune Diable. The main protagonist however is sugarcane, this weed that breaks the back of the former slave and the Coolie alike, unjustly favours the White master, transforms into golden brown sugar and heady rum or tafia, and rules this island and all those who live on it.

Confiant’s early childhood memories are centred around his grandfather’s plantation—a few hectares of sugarcane and a small rum distillery. In the nineteenth century, Martinique’s countryside was full of large sugarcane plantations like Courbaril, Gradis, Eyma and Fonds d’Or. Each plantation was the private property of the Béké who lived with his family and servants in the sprawling villa called the Grand’Case or Big House. The plantation was run by the White overseer, and a foreman and a steward, who were usually of mixed race. The Coolies and Black labourers assembled in the courtyard in front of the Grand’Case where the foreman assigned tasks for the day before they trudged up to their workposts.

The Indian reader will be intrigued by the tales from Indian mythology told differently. Some of the spellings like Kannavédi, Ouméavali, Malimouté may be baffling. Consequently, I have opted for familiar spellings in the translation after consulting specialists and whenever I have not been able to trace the word, have retained the spelling provided by the author, like in the case of ‘Penpirenday’ or ‘Irattavati’. In any diasporic culture, myths, customs and beliefs get refracted as they traverse the kaala paani and are revisted, reimagined, repurposed to suit the new context.

Over time, Tamil has ceased to be the language of communication and has become the sacred language reserved for religious ceremonies. Prayers and devotional songs are orally transmitted from generation to generation and many words have become phonetically creolized like Maldévilin for Maduraiviran.

As a mark of respect for the multilingual narrative imagined by Confiant, this translation has also chosen to toggle between English, French, Creole and Tamil. For instance Creole expressions like devant-jour, femme-dehors, taxi -pays, nègre-griffe, have been retained and are followed by a translation the first time they appear in a chapter. Thereafter only the Creole word is used. Or consider Vèpèlè which is the Tamil word for azadirachta indica that has been translated as neem and l’eau safranée as turmeric. A glossary has also been provided towards the very end for ready reference.

Like the original, this translation pays homage to all those brave women and men who crossed the kaala paani, driven by hunger, despair and oppression, to toil relentlessly under the scorching sun in sugar plantations of Martinique. The Creole culture that Confiant seeks to nurture and disseminate has been enriched by Tamoulitude. The colourful ‘madras’ fabric, kolbu also known as colombo, the mélange of spices, the temples that still buzz with devotees…all tell a touching story.

As a child, I grew up listening to my mother sing the Tamil poet Subramania Bharati’s Karumbu tottattile (In the Sugarcane Plantations) wherein the poet asks the wind to carry back the sorrowful outpourings of the women toiling in the cane fields in an island lost in the oceans, so far from home, exploited, abandoned to their fate. When I first read La panse du chacal, I knew that the wind, wet with their tears, had finally reached our shores.

A visit to Guadeloupe where I met and interacted with Tamil Creoles impacted me profoundly. When I first read this Tamil tale told in French, I knew I had to ferry it to the Anglophone world in my role as translator-passeur. Prof Christine Raguet, poet Jerry Pinto, Christine Cornet from the Institut français en Inde and Ravi Singh from Speaking Tiger made this translation possible.

As Walter Benjamin says in ‘The Task of the Translator’, ‘…all translation is only a somewhat provisional way of coming to terms with the foreignness of languages’. So I have kept the rough edges, preserved the whiff of otherness and allowed the echoes of the original to resonate throughout this translation. How successful this attempt was is a decision I must leave to the reader.

Excerpted with permission from the Translator’s Introduction from the book The Cane-Cutter’s Song, Raphaël Confiant, translated from the French by Vidya Vencatesan, Speaking Tiger Books. Read more about the book here and buy it here.

Join The Dispatch Whatsapp Group to stay updated
The Dispatch is present across a number of social media platforms. Subscribe to our YouTube channel for exciting videos; join us on Facebook, Intagram and Twitter for quick updates and discussions. We are also available on the Telegram. Follow us on Pinterest for thousands of pictures and graphics. We care to respond to text messages on WhatsApp at 8082480136 [No calls accepted]. To contribute an article or pitch a story idea, write to us at [email protected] |Click to know more about The Dispatch, our standards and policies
TagsFiction Raphaël Confiant Speaking Tiger Books Vidya Vencatesan