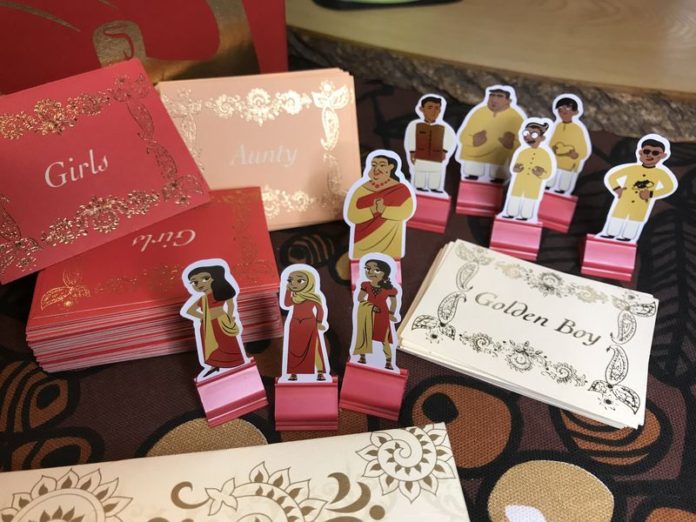 LONDON: When Nashra Balagamwala’s Pakistani family started pressuring her into an arranged marriage, she decided to get creative to avoid the myriad of suitors being foisted upon her.

Like many young women in South Asia, she was targeted by older women, nicknamed Rishta aunties, who wanted to pair her up with eligible men.

“It truly started when I was 18, right as my sister got married … literally, the day of wedding, all the aunties started coming up to me and saying, ‘You’re next, you’re next’,” said Balagamwala, now aged 27 and living in New York.

“I’d wear the fake engagement rings, or whenever an auntie was looking I’d pour an extra helping of food on my plate,” she said, as the matchmakers considered women who didn’t watch their figure to be less desirable brides.

Those real-life strategies inspired her to create the board game “Arranged!” where players take the role of teenage girls trying to escape an ‘auntie’, which features in “Gamemaster”, a documentary about aspiring game designers released this month.

Arranged marriages – where a couple are matched by family members – are common in South Asia. Whilst it is different from forced marriage, many young people face intense pressure to wed and start a family shortly after reaching adulthood.

Wanting a different life, Balagamwala convinced her family to allow her to wait until she was 21 – and as she reached the deadline as a student at Rhode Island School of Design in the United States, she came up with the idea for the game.

“When I was going back for the winter break, my parents had a boy lined up for me to meet,” she said.

“So to de-stress from that I started creating this list of all the crazy things I used to do, or that my cousins used to do, to try to discourage the Rishta aunties.”

In “Arranged!”, the girls attempt to deter auntie by drawing cards with commands like getting a tattoo, wearing a sleeveless shirt, talking about pursuing a career, or being seen hugging a male friend.

But cards like being able to make a perfectly round roti flat bread, or having a sister who is known to be very obedient to her in-laws, move auntie closer to a player.

When the board game was released in 2017, it drew anger from some acquaintances in Pakistan – but the media attention also made Balagamwala an undesirable wife in the eyes of the aunties and convinced her family to stop pressing her to marry.

“My dad essentially said, ‘You wanted to not get married and now you’ve made sure you won’t do that’,” she said.

She was contacted by dozens of young women, mostly in India, who said the game helped them to start conversations with their families and opened their eyes to the stress they felt.

“I’m hoping that with the game someone else will be inspired to be like, ‘No, I can break free too’,” Balagamwala said in “Gamemaster”, which follows the lives of four game designers.

One unexpected outcome was a deluge of marriage proposals on social media – but Balagamwala said her family have accepted that she will not marry any time soon.

“Now they’re like, ‘You do you, find your own guy,” laughed Balagamwala, who is studying for a master’s degree exploring the links between design and social justice at Harvard University.

“There is still a little bit of that stress in their hearts and minds where they are like, ‘Oh my God, she’s 27 and there’s no boy on the horizon’ so I think that stresses them out.

“It doesn’t stress me out at all.”