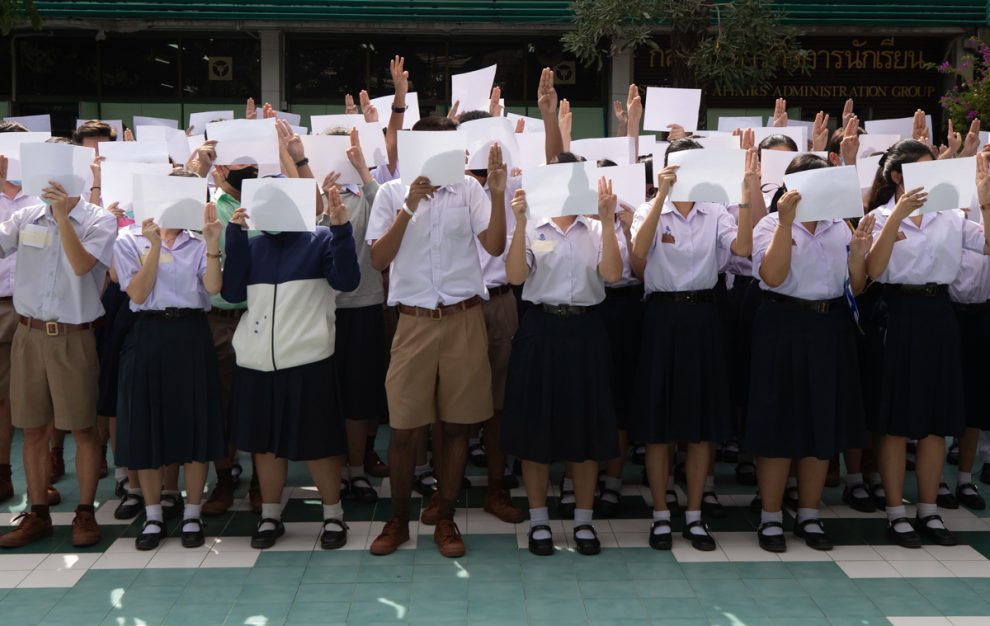 In 2020, the protests in Thailand have been a crucial development in Southeast Asia and have a global impact. The protests that started in early February were stalled by March due to the pandemic but has revived in July.

Protests in 2020
The protests in Thailand have evolved in two phases. The first phase started on 23 February, when the protestors were triggered by the dissolution of the Future Forward Party (FFP). There were protests by students in universities and high schools. However, due to the lockdown declared by the government in order to curb the rising cases of COVID-19 affected, the protests died down. The lull lasted only till 18 July, when a large demonstration was organised under Free Youth Umbrella at the Democracy Monument in Bangkok, the protests commenced again. This marked the beginning of the second phase.

First, this year’s protests could be essentially labelled as a youth protest. The protestors are especially young students, and in the first phase, the protests were restricted mostly to the universities and school campuses. The protest theatre changed with the second phase, and the resistance was taken to the streets. Protests are not rare in the country, especially street protest. However, youth-centric protests in Thailand seem to have revived since 1973. From 2006 to 2014, the most common protest was between the Red Shirts and the Yellow Shirts that did not comprise of students from elite institutions.

Second, unlike the country’s previous protests this year’s protests are not stagnated in Bangkok and its periphery. These protests, especially in the second phase, have spread to more than 49 provinces.

Third, these protests started against the political government, especially Prayut Chan-O-cha, the current Prime Minister and the newly constituted 2017 Constitution. However, by the second phase, the protests shifted demands, including the monarchy’s reform. In the beginning, the protestors only had three basic demands, dissolution of the parliament; the ending of intimidation of people; and drafting a new constitution. In the second phase of the protests, the demands got stretched to include ten points. These ten points included and emphasised the monarchy’s reform, which also demanded the institution be placed under the constitution. This is a new phenomenon in Thailand. The most important trend in this year’s protest is the fourth one. For the first time, the monarch was publicly criticised. On 3 August, Anon Nampa, a Human Rights lawyer, was the first to call for the palace reform, after criticising monarchy as an institution, during a small demonstration. This is an important development given the reverence the monarchy enjoys in the country. Fifth, symbolic gestures and social media platforms as one of the media of protests is a new development. Symbolic gestures such as three fingers salute, and the usage of yellow ducks, prominent anime and fictional youth icons, and social media platforms such as Twitter are new in the Thai protest culture. These usages were replicated from the Hong Kong protest, which has been the Thai youth’s inspiration.

Issues in the background
Three main actors have contributed towards the creation of an ideal background for the on-going protests. First, the Junta government: In 2014, when the military headed by Prayuth Cha-O-cha came to power after a coup, it was not unusual in the Thai political history. Thailand had witnessed 13 coups till date since 1932 when Constitutional monarchy was established. Since then, the Junta under the banner of National Council for Peace and Order (NCPO) in the name of governance have restricted civil rights, and there have been increasing corruptions. In 2017, the newly drafted Constitution was introduced, after a referendum criticised for being unfair. The constitution itself was marred by disparages as it paved a way to an empowered military-appointed Senate to elect the Prime Minister for two tenures. It also ensured that even a new government comes to power it has to follow a national strategy road map designed by NCPO for next 20 years. In 2019, when a party formed Prayut Cha-O-cha came back to power it was not surprising. The FFP which had garnered youth support due to its political agendas was last hope for several. Hence, the unethical dissolution of the party became the immediate cause for the protests.

Second, the monarchy: Monarchy has been the most revered institution in Thailand, which is understood parallel to the Thai nationalism. Former late king, Bhumibol Adulyadej was respected as national father and the Queen as a mother. However, their son newly anointed King Maha Vajralongkorn has never enjoyed such respect as his lifestyle was not something the orthodox Thai society associate with a King. Additionally, his increasing political interference by voicing an opinion on the 2017 Constitution, gaining personal ownership of royal assets, and a public announcement of voting for “good people” during the 2019 election and others made many unhappy. Also, the King has been running the country’s affairs from Bavaria, Germany, where he lives, and hence is termed by many as the ‘absent King’. These were the aspects reassert by the protestors while criticising the monarchy.

Third, the pandemic: this has acted as the catalyst for this conflict. Since the Junta government came to power, the economy has been badly affected. The rising corruption and lack of knowledge related to the country’s economic upliftment worsen the scenario over the years. The pandemic this year added to the crippling economy, which is completely based on tourism. Since March, the implementation of Emergency Decree angered the people as the majority saw it as an impediment to the economy rather than the government’s effort to stop the spread of the COVID-19 virus. The resignations of two Finance Ministers, one after the other, in 2020, made people lose faith in the government. An unstable government, rising corruption, questionable democracy and crippling economy- the youth had enough, which justified the protests.

Perspectives in 2021
First, the protest may not frizzle out suddenly in 2021. However, the success of these protests will be a far-fetched expectation. Historically, it has been proven that no protests have been successful when the military and the monarchy have been together. Second, the year 2021, may witness several more youth to question the need of monarchy as an institution. However, this should not be taken as an indication of the demolition of the institution in the coming years. There are several loyalists of this institution. Despite having a problem with the personal life of the current king, there are several in Thailand who consider the criticism of the King to be blasphemy and to be an attack against the Thai nationalism. Lastly, political instability and thriving corruption is not uncommon in several other countries in the region. It will not be surprising if more youths raise their voices against the regimes in these countries. In fact, Malaysia, where political tussle, growing corruptions and growing political interference of the Sultan, is not appreciated by many, may follow suit in the coming years. Whether there will be a domino effect of Thailand protests in the region is what one has to wait and watch.

PhD Scholar at the School of Conflict and Security Studies at NIAS. Her research is focussed on Southeast Asia, primarily Myanmar, Thailand, and Malaysia. In particular, she studies politics, conflicts and peace processes relating to Myanmar, with special attention on the Rohingya conflict.