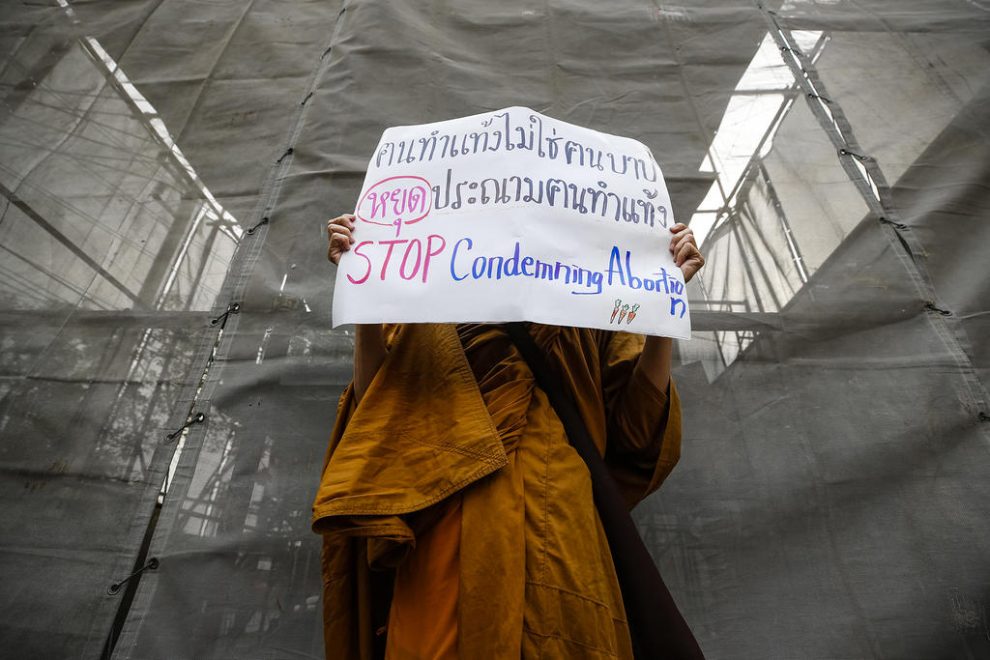 BANGKOK: A Buddhist monk known for his support for LGBT+ rights has sparked outrage among conservatives after he called for Thailand to decriminalise abortion.

Phra Shine Waradhammo was among about 20 pro-choice activists who protested in front of the Thai parliament this week, calling for all penalties to be revoked for women who choose to terminate a pregnancy.

“People were calling me ‘garbage’ and a ‘hungry ghost in a saffron robe’ on Facebook,” the 52-year-old monk said on Friday, referring to comments under a photo of him holding a “stop condemning abortion” placard at the demonstration.

“Even when I spoke about LGBT+ issues a decade ago, I didn’t receive as much criticism, probably because people see (abortion) as murder,” he told the Thomson Reuters Foundation.

Abortion is opposed by many of Thailand’s conservative Theravada Buddhism majority, who believe it goes directly against Buddhist teachings and that women who undergo a termination will be haunted by a ghost.

But on Monday, Thai lawmakers voted in favour of allowing abortion up to 12 weeks of pregnancy while retaining penalties for later terminations – a move pro-choice advocates said fell short of protecting the rights of the mother.

Under the amendment to an existing law, an abortion after 12 weeks would be allowed only in certain conditions and would otherwise be punishable by up to six months in prison, or a fine of up to 10,000 baht ($334) or both.

Phra Shine is an active user of social media and frequently posts about gender issues and sexual equality, and responds to questions and comments on how these relate to Buddhism.

A video of him engaging in a discussion on abortion that was posted on Facebook received more than 300,000 views.

In 2010, he wrote an opinion piece for a national magazine about the remains of more than 2,000 fetuses discovered by police at a Buddhist temple in Bangkok, calling for people to sympathise with women who undergo illegal abortions.

“I see religion as being contradictory in that it wants people to reach nirvana, or the end of suffering, but why aren’t people forgiven for committing sins instead of being berated, which will make them unhappy?”

Despite embracing many elements of Western-style democracy, Thailand has included Buddhist teachings into laws, such as banning gambling and rules on alcohol consumption, said Khemthong Tonsakulrungruang, a law lecturer at Chulalongkorn University

“Morality has its own mechanisms for punishing those who commit sins, such as heaven and hell,” said Khemthong, who has researched Thai law and religion.

“Why are we so fixated on killing as a sin but not on the quality of life of a child? In this era, Buddhism cannot survive by seeing things in a simplistic way.”

Jumping the COVID-19 vaccine line: Where it’s happening and what’s being done to stop it
She cooks. He eats. She clears. Sexism film stirs India
Comment