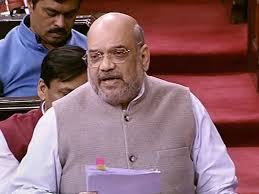 Union Home Minister Amit Shah on Wednesday said that Shiv Sena, which supported the Citizenship (Amendment) Bill, 2019, in the Lok Sabha, should tell the people of Maharashtra what changed their stand on the matter.
“Shiv Sena supported the Bill yesterday. They should tell the people of Maharashtra as to what happened within the span of a night that they changed their stand today,” Shah said while replying to the debate on the Bill in the Rajya Sabha. Shiv Sena leader Sanjay Raut, during the debate, lashed out at its former ally and said that his party does not need a certificate for its nationalism or Hindutva ideology from the BJP.

“I have been hearing since yesterday that those who do not support this Bill are anti-national and those who support it are nationalists. We don’t need any certificate on our nationalism or Hindutva,” he said.
Earlier today, Raut had said that the Shiv Sena’s stand could be different in the Upper House of the Parliament from what it was in the Lok Sabha if they do not get satisfactory answers from the Central government.
The Bill, which seeks to grant citizenship to refugees from the Hindu, Christian, Sikh, Buddhist and Zoroastrian communities fleeing religious persecution from Pakistan, Afghanistan, and Bangladesh, was introduced in the Rajya Sabha today.It was passed in the Lower House of the Parliament with a majority of 311 votes against 80 late on Monday.