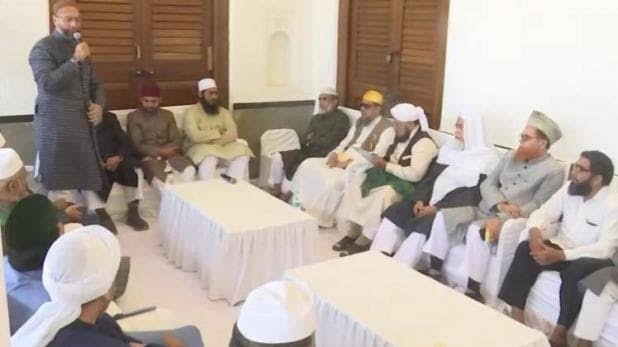 United Muslim Action Committee on Friday held a meeting at All India Majlis-e-Ittehadul Muslimeen (AIMIM) head office here to discuss and formulate a strategy against the Citizenship (Amendment) Act, 2019 and National Register of Citizens (NRC).
AIMIM chief and Hyderabad MP Asaduddin Owaisi and Muslim Scholars from across the state participated in the meeting. In the meeting, Owaisi said that they will strongly oppose the new law but will also take police permission for the demonstrations.
“We have to oppose this act strongly, but only after taking police permission and peacefully. As you know in Lucknow and Delhi, there was police brutality. There was also violence in Mangaluru, in which two Muslims died. If there is violence then we will condemn and disassociate ourselves from it,” he said.
Owaisi also pitched to conduct meetings across Telangana to build consensus.
This comes amid widespread protests against the newly-enacted citizenship law across the country.