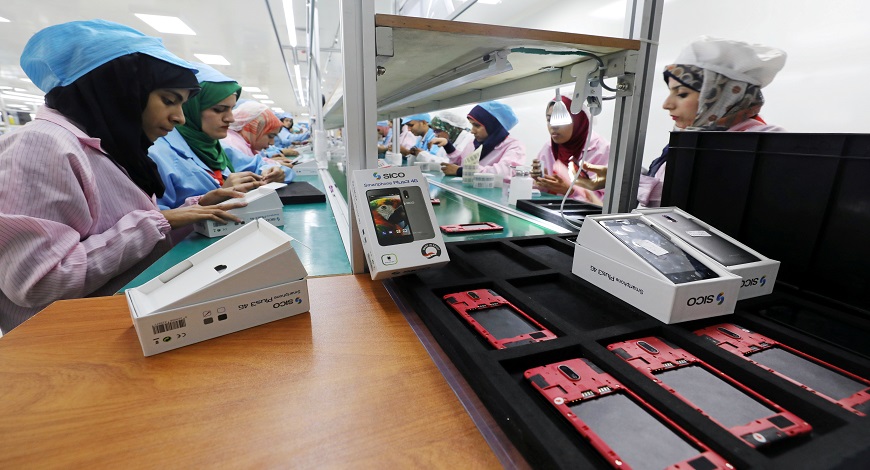 AMMAN: As COVID-19 swells the ranks of unemployed women in the Arab world, surging demand for digital skills could help many of them find work in a region where only one in four women has a job.

The pandemic has taken an especially heavy toll on retail, tourism and hospitality jobs traditionally held by women, but experts say those able to retrain could tap into growth areas like digital marketing, e-commerce and online customer support.

“This is a tremendous opportunity. These are areas where you can reskill someone relatively quickly,” said Jasmine di Florio, senior vice president at Education for Employment (EFE), a job training non-profit for young people in the Middle East and North Africa.

“We need to teach young women all kinds of digital skills but we also need to continue to teach them human skills – things like empathy, teamwork, leadership… (that) are in even greater demand now because so much is going digital.”

The fourth industrial revolution – a term referring to the new era of digital advances that is changing the way people live and work – is expected to double job opportunities for women in the region by 2030, according to a 2020 McKinsey study.

Many women are already finding new opportunities – sometimes by putting their new-found tech skills to work in jobs where they have an innate edge over men.

One of EFE’s trainees, Walaa Shahahdeh, who has her own business repairing smartphones, said her services were in high demand among women in her conservative Jordanian community who did not want men seeing personal photos on their devices.

“Technology is constantly evolving. You have to keep up to date… because new devices keep coming out and repairs will never stop,” said Shahahdeh, 30, who comes from the Tafileh governorate in south-central Jordan.

“Because of high usage during coronavirus due to remote learning and work from home, devices are breaking down more often and I’m getting more calls.”

The pandemic is expected to push 700,000 Middle Eastern women out of work in 2020 – about 40% of the 1.7 million total jobs expected to be lost, according to aid organisation Oxfam.

That is despite women in the Middle East and North Africa only accounting for a quarter of the workforce – the world’s lowest rate of female participation in the labour market.

In hard-hit countries like Lebanon, where an Aug. 4 explosion compounded the impact of a financial crisis and COVID-19, the number of unemployed women in June 2020 was up 63% compared with figures from 2018 and 2019, according to UN Women.

New job prospects could provide some relief, though the additional burden of unpaid work – such as childcare and supervising remote schooling, is likely to widen the digital gap between men and women in Arab states.

That could mean retraining is even more of a challenge for women, said Manuel Langendorf, a researcher on digital transformation in the region.

“People may have access to the internet but still you will find a lot of families across the region that don’t have multiple laptops or desktop computers,” said Langendorf, adding that men often have priority when using family devices.

“That also affects the way women will be able, and are at the moment able, to upskill or reskill.”

The digital gap between men and women in Arab countries had already increased from 19% to 24% between 2013 and 2019, according to the International Telecommunication Union.

Gender differences in internet access vary widely across the region, and within countries too.

Women in rural areas face “two divides at the same time” and risk missing out on a lot of the promising job prospects of the evolving digital economy, Langendorf said.

“Most of the digital economy across the region is based in urban areas… so the talent is drawn to that but people who don’t live there have (fewer) opportunities to participate and learn from that knowledge exchange,” he added.

The switch to distance learning during the pandemic has made it easier for many people to access training and study programmes, however.

When lockdowns came into force in March, EFE across the region quickly shifted its training online, adding new components focused on digital and social media skills.

Following the change, women’s enrollment rose to 65% on some courses, up from the usual 50-50 split between men and women.

Menna Fathy, 23, who lives in the Egyptian port city of Suez, some 130 km (80 miles) from the capital, said being able to access the training remotely had been an unexpected boon.

“If I had to travel to Cairo every day for a month it would have been draining. The online option was a blessing,” said Fathy, who found an insurance job at a bank soon after.

Even though private-sector employers have been badly affected by the pandemic and opportunities are scarce, there is still value in helping women gain skills today, di Florio said.

“We found a surge of youth and women who want to keep learning even if they know they’re not going to get a job tomorrow,” she said.

About 44% of women in the region cited limited policies on work-life balance as the main obstacle for keeping a job and said policies that let them work remotely and receive digital training were priorities, the McKinsey report found.

EFE’s trainees have been learning to market their skills online and use freelance platforms to find part-time work, helping connect women seeking flexible jobs with employers.

“The gig economy can really work for them,” di Florio said.

“But we need to make sure that they’re getting paid a living wage and that they have access to all potential opportunities and customers on those platforms.”