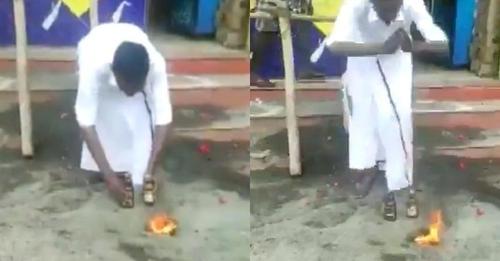 The MK Stalin-led state government announced that TASMAC wine shops will be allowed to open in the 27 districts from 10 am to 5 pm. The move may have attracted criticism from the opposition, but one hilarious incident summed up exactly how much people had missed liquor.

#WATCH | A local in Madurai worships bottles of liquor after Tamil Nadu govt permits the reopening of liquor shops in the state pic.twitter.com/sIp9LUR0GM

In a video that is going viral, a man from Tamil Nadu’s Madurai city was seen worshipping alcohol bottles soon after he had bought them from an alcohol store. The man, who reportedly went to buy bottles of liquor, ended up lighting an earthen lamp and kept it on the steps of the shop before purchasing two bottles of alcohol.

After buying the bottles, the man was again seen kissing and praying to them while he stood in front of the liquor shop. The video was shared by news agency ANI with the caption, “A local in Madurai worships bottles of liquor after Tamil Nadu govt permits the reopening of liquor shops in the state.”

After a gap of 35 days, salons, parks, and state-run liquor outlets in 27 districts in Tamil Nadu reopened on Monday as the state government had announced further relaxations on Friday (June 11).

Tasmac shops are not permitted to open in 11 districts — Coimbatore, the Nilgiris, Tirupur, Erode, Salem, Karur, Namakkal, Thanjavur, Thiruvarur, Nagapattinam and Mayiladuthurai — where the number of Covid cases is high.

Under the new set of guidelines, schools and colleges have been allowed to function only for the admission process.

Coronavirus transmission very low right now; ‘Delta Plus’ not yet variant of concern: Govt
The trees worshipped by Hindus
Comment