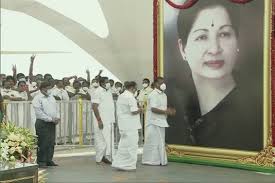 Tamil Nadu Chief Minister Edappadi Palanisamy inaugurated Jayalalithaa Memorial at Chennai today. The 79 crore worth grand memorial is built on a nine acre land situated on the shores of the Marina Beach. The phoenix shaped memorial has a statue of Jayalalithaa and MGR with an artificial waterfall. The building was completed within a record period of 30 months.
Scores of AIADMK workers from all districts thronged the city to witness the event.

Incidentally, V.K. Sasikala, the confidante of the late Chief Minister Jayalalithaa Sasikala was officially released from the Parappana Agraharam Prison today. She was shifted to Victoria Hospital on 21st Jan and had tested positive. As per protocol, she will be discharged on 10th day if she is asymptomatic and free of oxygen support for at least 3 days.