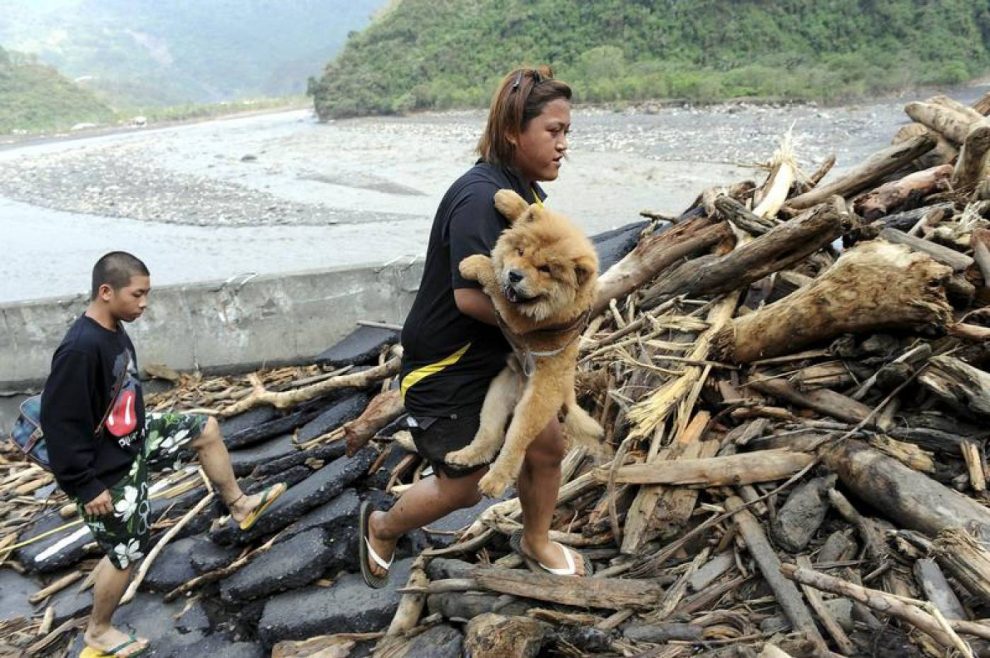 “The mountain forest landscape changed overnight. In a blink of an eye, the forested river valleys went bare. It was a terrible sight. The dike broke and Qishan town was completely swept away,” he remembered.

But as global temperatures rise due to planet-warming emissions, something odd is happening in Taiwan: devastating typhoons appear to be gradually disappearing.

The self-ruled western Pacific island, claimed by Beijing as Chinese territory, has historically seen three or four typhoons a year, but since 2010 the number making landfall has fallen to 2.5 a year on average.

In 2020 not a single storm hit for the first time in more than a half century.

“After Morakot, the number of disasters per year has generally decreased,” Chen noted, adding he believed climate change was playing a role.

Taiwanese climatologist Chia Hsin-hsing believes the trend – which he called a “golden bell force-field” – is the result of high-pressure zones merging in the upper atmosphere over the Pacific and Southeast Asia.

That is effectively “building a protective wall around Taiwan” and driving typhoons north towards Japan and South Korea, said Chia, director of the environmental resources department at Weather Risk, a Taiwanese forecasting company.

Huang-Hsiung Hsu, a climate researcher at Academia Sinica in Taipei, said that if current rates of greenhouse gas emissions were not reduced “the northwestern Pacific Ocean is expected to see the greatest decrease in tropical cyclone activity of all the planet’s oceans”.

The shift could halve the number of typhoons making landfall in Taiwan by the end of the century, compared to the historical average of 3.5 a year, he said.

For many in Taiwan, particularly those living in vulnerable areas, a reduction in typhoons is a welcome respite. But their absence this year might also foretell the rise of another challenge – an emerging lack of water.

This year has set another climate-related record in Taiwan: its worst drought in more than half a century, as rainfall has declined to between 20% and 60% of the historical average, depending on the location.

Over the past 50 years, the frequency and severity of droughts have gradually increased, according to the government’s National Science and Technology Center for Disaster Reduction.

Hsu’s high-resolution models suggest changes in atmospheric currents as a result of climate change could bring warmer winters and springs, and a 40-60% reduction in annual rainfall by the end of the century, if warming continues unabated.

That decrease in rainfall would come partly as fewer rain-laden typhoons hit – although those that do make landfall could bring stronger winds and 30-40% more rain than typical, Hsu said.

Already this year, with monsoon rains falling short of normal and no typhoons, water is in short supply, affecting agricultural production.

“If it gets worse, it will affect industrial and public water use,” Chia said.

Water shortages forced Taiwan’s government to cut off irrigation water in mid-October to 19,000 hectares (46,950 acres) in the west, or 6% of Taiwan’s total irrigated farmland.

“Look at this earth, the cracks are so big you can even stick your hand in,” said Tien Shou-hsi, a rice farmer in the western city of Zhubei.

Rice normally needs large amounts of water to grow and mature, but this year he said there was no water at all, calling the shut-off of irrigation water “ridiculous”.

“The rice hasn’t properly matured yet, and it won’t have a chance. It can only be sold for feed compounds,” he added.

The reduction in irrigation water is expected to affect the island’s overall harvest of rice, its principal and most valuable food crop, grown in the south and on western plains.

While most farmers who planted will get a harvest this year, an abundance of poor-quality grain is expected, which will fetch lower prices than usual.

The government has offered compensation of about $500 per hectare to farmers affected by the irrigation shut-off.

But Huang An-tiao, a farmer and chairman of the Tainan Environment Protection Union, a non-governmental group, said small-scale farmers had been “ripped off” while water-intensive industries like petrochemicals and electronics received enough.

Huang Shu-chuan, a grain farmer, said in the west, many rice fields were left fallow this year as a result of water shortages, which was having a “huge impact” on farmers.

To combat growing water shortages, the state Water Resources Agency announced in November that three new reservoirs would be constructed but some farmers viewed this a band-aid solution.

“If there’s no rain, what use is building bigger reservoirs?” asked Huang, the farmer.

She said a cheaper, more efficient way to store water would be in the rice paddies themselves, as long as efforts were made to protect and restore damaged farmland so it held water better.

Taiwan has a goal of halving greenhouse gas emissions by 2050 from 2005 levels, but tapping into global advice to adapt is difficult, with Taiwan excluded from United Nations’ bodies.

Taiwan is not a member of the United Nations due to objections from China which considers the island to be a breakaway province under its “one China” policy.

“Our attempts to reduce emissions or prevent damage from extreme weather events rely on Taiwan’s efforts alone, which is not easy,” said Wei-Ming Huang, a department deputy director at the Environmental Protection Administration.

Are digital health passports a good idea?
‘This will make us poorer’: Pakistani metro brings uncertainty for displaced residents
Comment