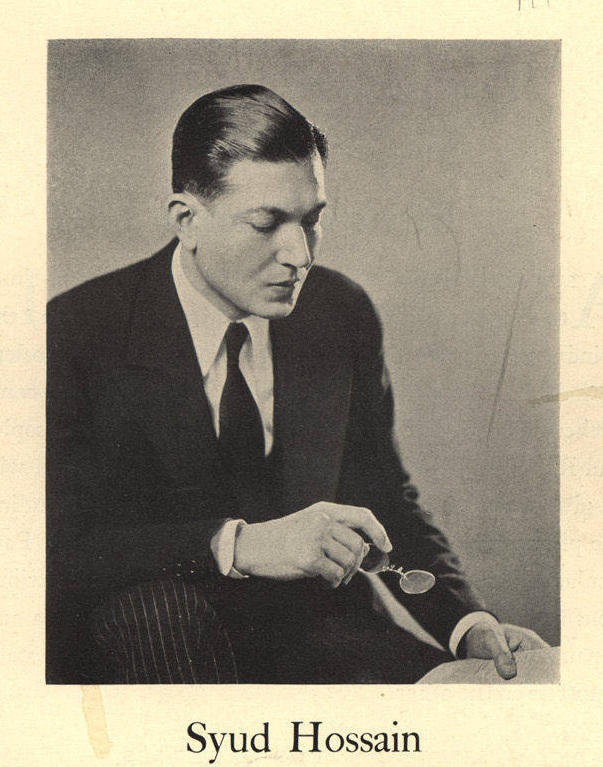 With India’s imminent independence, Prime Minister Jawaharlal Nehru had taken a personal interest in putting together India’s diplomatic service, ensuring that well-known public figures were sent as Ambassadors to important countries, such as Asaf Ali to the United States, Vijaya Lakshmi Pandit to the U.S.S.R., and V.K. Krishna Menon to the United Kingdom. Syud Hossain, a Muslim, a scholar of Islamic history, a connoisseur of Persian poetry, and an expert on the region, seemed a natural choice as the first Indian Ambassador to the preeminent Arab country.

Syud Hossain arrived in Cairo on 17 February 1948 to a reception that was perhaps his finest hour. The Indian Opinion reported, “With dignified and colourful ceremonial and evidence of public goodwill, India’s First Ambassador to Egypt Dr. Syud Hossain on March 3 presented his credentials to the Egyptian Monarch H.M. Farouk the First. The Ambassador drove to the Abdin Palace in a glass-sided coach drawn by four horses which was escorted by one hundred cavalrymen of the Royal Guard in magnificent blue and crimson uniforms with drawn swords. Conducting the Ambassador was the First Chamberlain of the Royal Palace. In a separate coach rode members of the Embassy staff, the Counsellor Mr. S.N. Haksar, and the secretary Mr. Avtar Singh. Hats were doffed and a wave of clapping from spectators lining the route followed the glittering cavalcade as it proceeded slowly down the broad boulevard to the Palace. On his arrival at the Palace as also on his departure the Ambassador was saluted by a full guard of honour.”

Shortly afterwards Syud was also appointed as the first Minister of India to Transjordan in June 1948, and also as the first Indian Minister to Lebanon in November or December 1948. He presented his credentials to King Abdullah I of Jordan, and President Sheikh Bishara El Khoury of Lebanon respectively. As Syud was living alone, he preferred to stay at the Shepheard’s Hotel in Cairo which was to be his home until his sudden death a year later.

Little is known about his activities on the diplomatic front in Egypt. The Indian Ministry of External Affairs continues its colonial heritage in being extremely cagey in allowing access to its archives; hence the reliance on limited public sources to piece together Syud’s yearlong diplomatic stint. The period soon after independence was a delicate time for India in formulating its diplomatic strategy. The horrors of partition followed by Gandhi’s assassination had muted the euphoria of freedom. Economic necessity for Western (especially American) aid had to be counter-balanced with aligning too strongly with any country to the detriment of an independent foreign policy. At the time of independence, India was still a net exporter of raw materials and an importer of finished goods. It was desperate for foreign investment in infrastructure and capital industries, but without losing control of those entities to foreign capitalists. It was a humungous challenge in the immediate post-war years.

The independent kingdom of Jammu and Kashmir became a part of India when the then Maharaja, Hari Singh, signed the Instrument of Accession on 26 October 1947. Pakistan, which claimed Kashmir for itself, engaged in a war with India in mid-1948 which continued till a ceasefire was brokered between the parties by the United Nations in January 1949. The involvement of the UN in the first war between the two new neighbours attracted a considerable amount of international attention. The other major issue facing the Government of India was to bring the princely states under the new Union. Almost all princely states within the contours of independent India had agreed to the accession, but Hyderabad, ruled by Nizam Osman Ali Khan Asaf Jha VII, proved to be recalcitrant, and had even asked Pakistan for help against India. Finally, the Government of India sent in its armed forces, and the Nizam surrendered on 17 or 18 September 1948. A third issue that called for delicate handling was the response to Israel’s creation in 1948. Keeping in mind the sensitivities of the Islamic countries, particularly the Arabs, and also domestic Muslim opinion, India voted against the partitioning of Palestine in 1947, and again voted against Israel’s admission to the UN in 1949. The duplicity of publicly chastising Israel while privately cavorting with it would be a feature of India’s policy well until 1992 when it established diplomatic relations with that country.

With a Muslim majority Pakistan involved in Kashmir, and a Muslim ruler in Hyderabad subjected to military action, both the skirmishes caused a great deal of disquiet in Islamic countries. In September 1948, some members of the Arab League gave a statement that the Lebanese Premier had offered his services to mediate between India and Hyderabad. Syud Hossain immediately rebuffed this, declaring that there was “not one iota of truth” in the report. Pakistan’s ambassador to Egypt waded into the troubled waters to smugly offer that, “Pakistan’s good offices are always available”. The head of the Moslem Brotherhood, Sheikh Hasan el Banna, sent a telegram to Nehru saying, “The Moslem Brotherhood and Arabs throughout the world protest against Hindustan’s bestial aggression in Hyderabad. The Hindustani reactionaries will meet the same fate suffered by the imperialist powers, but Hyderabad will remain independent forever.” Egypt was particularly in a dilemma. Having been a colonial subject itself it supported the Indian national movement, while its self-appointed role as the leader of the Islamic world urged a sympathy towards Pakistan and Hyderabad. The increasing influence of the Muslim Brotherhood made it wary of openly expressing support for India. It was to Syud’s credit that he was able to establish a trusted relationship both with the Egyptian monarchy as well as the Arab League to smoothen India’s fledgling diplomatic forays in the region.

In the short span he was in Cairo, Hossain received a number of visitors, among them being Prime Minister Nehru, Vijaya Lakshmi Pandit, her daughters Chandralekha and Nayantara, Dr P.S. Gill, and his own niece Shaistha Ikramullah (who was Pakistan’s Ambassador to Morocco at that time). On his way to attend the Commonwealth Prime Ministers’ Conference in London, Nehru stopped briefly at Cairo airport on 6 October 1948 when Azzam Pasha, the Secretary General of the Arab League, and Syud met him at the airport. From London, Nehru went to attend the Special Session of the UN in Paris. Vijaya Lakshmi led the Indian delegation at the third UN General Assembly session held there. Her daughters, Chandralekha and Nayantara, who had come to see the session, travelled through Cairo on their way back home from Paris. The sisters were received by Syud, and they stayed with him for a few days. Nayantara remembers visiting the Sphinx and pyramids with him and found him “sweet” and affectionate. When asked if she had any other memories of him, she smiled and said, “Chandralekha remembers that he drank a lot and repeated himself while talking.”

On his way back from Paris, Nehru stopped at Cairo again on 4 November. He spent a couple of days there having meetings with King Farouk, Prime Minister Nokrashy Pasha, Azzam Pasha (Arab League), Heykel Pasha (President of the Egyptian Senate), Makram Ebeid Pasha (Head of the Wafdist dissident bloc), and Dr Pablo Azcarate (UN representative in Egypt). It was a measure of the high priority that Nehru accorded the region in his foreign policy imperatives that he met the Arab League representative twice during this trip, on what was also one of his first trips abroad as Prime Minister. Syud Hossain therefore had to walk a fine line in upholding the correctness of India’s actions while also being cognizant of the pressures on the Egyptian King. In the end, the Arab countries eschewed hostility towards India’s actions, no doubt considerably influenced by Syud’s deft diplomacy. Nehru returned to India arriving in Bombay early on 6 November. His nieces had joined him on the flight from Cairo to Bombay.

Excerpted with permission from A Forgotten Ambassador in Cairo: The Life and Times of Syud Hossain, N.S. Vinodh, Simon & Schuster India. Read more about the book here and buy it here.

The Dispatch is present across a number of social media platforms. Subscribe to our YouTube channel for exciting videos; join us on Facebook, Intagram and Twitter for quick updates and discussions. We are also available on the Telegram. Follow us on Pinterest for thousands of pictures and graphics. We care to respond to text messages on WhatsApp at 8082480136 [No calls accepted]. To contribute an article or pitch a story idea, write to us at [email protected] |Click to know more about The Dispatch, our standards and policies
TagsA Forgotten Ambassador in Cairo NS Vinodh Simon & Schuster Syud Hossain