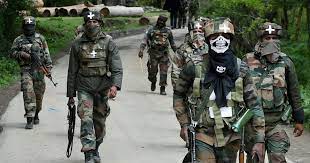 Jammu:  Police on Monday morning launched a search operation after receiving inputs regarding the movement of suspicious people with bags in the Chowki Choura area of Akhnoor here in the city outskirts.

“Two persons were spotted by some villagers early morning and as per their viewpoint, they were carrying bags,” police said.

They said that the suspects were spotted while crossing a road near KapaKala, Chowki Choura area of Akhnoor.

“Some locals and a truck driver on seeing them, informed police personnel deployed at a Naka and subsequently, Police team rushed to the spot and search operation started,” said police.

Sub Divisional Police Officer, Akhnoor, DySP Varun Jandial confirmed the report of suspects and said, “we are carrying searches but nothing has been found so far.”