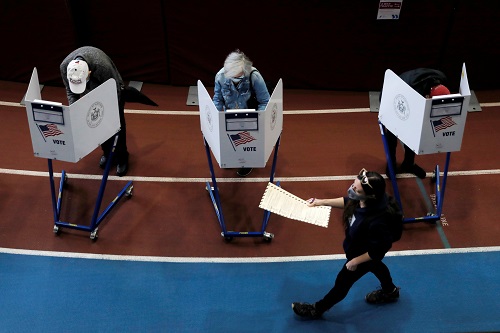 From police body cameras to new privacy laws, U.S. voters are set to decide a number of key digital rights issues in the Nov. 3 election.

The Thomson Reuters Foundation asked five tech and privacy experts what issues they are tracking:

“In the midst of a health and economic crisis, Proposition 24 undermines protections in current law and increases the burden on people to protect themselves — in ways that disproportionately harm people of color.

Prop 24 threatens to make privacy a luxury available only for the most privileged Californians.

By forcing Californians to opt out and potentially pay for their privacy, it places the burden of privacy on the individual, a load those in working families and marginalized communities cannot bear.”

“There’s an increasing consensus that we need the government to enforce rules to protect the open internet and to push back against corporate concentration.

If Biden wins we are concerned about who he’s likely to choose for key posts overseeing the internet – at for instance DOJ, the FTC, the FCC, and otherwise.

We also want to see government surveillance reined in. Key provisions of the Patriot Act expired in the spring, and we hope that Congress and the next administration will decline to reauthorize them.”

“I’m quite hopeful that voters will pass Proposal 2 in Michigan. Currently, much like the U.S. Constitution, Michigan protects every individual’s ‘person, houses, papers, and possessions’ against unreasonable searches and seizures.

But Proposal 2 would add ‘electronic data and electronic communications.’

While many types of communications are protected under the federal and state constitution already, this would be a landmark, signaling that we need much more comprehensive warrant protections for our electronic data.”

“Areas we’ve been monitoring include harmful hate speech, voter suppression, and other election-related disinformation. Platforms aren’t doing enough on their own to prevent damaging content from making its way onto people’s feeds.

Also, we are concerned that wireless networks in major cities may not be sufficient to handle election-related demonstrations. We asked providers to be prepared to handle significant network traffic increases.

People may need to record or document abuses and upload them in real-time to illustrate what’s happening on the ground, particularly after what we saw with police violence during recent Black Lives Matter protests.”

“The release of BWC (body worn cameras) and dash camera video requires the balancing of often competing values. In this case (in Akron, Ohio), the privacy of people on the video and the integrity of an investigation – along with other exemptions outlined by public records laws – must be balanced with the public interest in viewing the video.

Police departments should default to transparency and make every effort to release properly redacted video in a timely manner. The unintended consequences of premature release of video should also be considered in this pursuit of justice and transparency.

BWCs are great, albeit imperfect, tools for police transparency, training, and performance evaluation.”