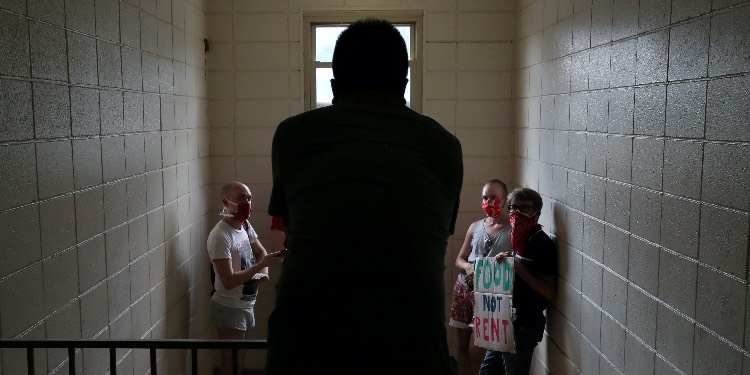 WASHINGTON: Increased use of surveillance technologies by landlords across the United States could worsen a looming eviction crisis amid the coronavirus pandemic, researchers and renters warned on Monday.

Speaking on a webinar, tenants and tech experts detailed the use of cameras, facial-recognition scanners and license plate readers, which they said were routinely deployed without residents’ consent or any explanation as to how their data is used.

Few laws govern the use of these systems, mandate disclosure of their deployment or offer tenants much legal recourse, said Erin McElroy, a postdoctoral researcher at New York University’s AI Now Institute.

“We’ve seen these companies really take advantage of COVID to roll out these technologies,” they told the Thomson Reuters Foundation, noting that a federal eviction ban in the context of the pandemic is set to expire at the end of the month.

“There’s a lot of fear that over the next year, as moratoriums end and tenants experience new forms of rent debt, that (technology companies) will continue to exploit the situation to abet processes of eviction,” they added.

Some facial-recognition systems for example can help catch tenants who are in violation on rent payments, said McElroy, who co-founded the Anti-Eviction Mapping Project.

Other tools allow for the automation of eviction notices, she added, making it harder for tenants to negotiate with landlords in case of hardship.

The National Multifamily Housing Council and the National Apartment Association, both of which represent large landlords, declined to comment.

Some residential surveillance systems are extending into the public.

Resident Terilyn Chen of Hercules, northern California, said that over the past year she has seen a proliferation of Flock Safety license plate readers using artificial intelligence deployed by homeowner associations in her town.

The decision was made during a closed meeting, and residents were told only four months after the cameras were deployed, Chen told the webinar organised by the Anti-Eviction Mapping Project, AI Now Institute and grassrots group People Power Media.

“This is a huge violation of privacy,” Chen said. “At a time when eviction moratoriums are coming to an end, there is legitimate concern to worry about how neighbourhood surveillance like this could be used to monitor organizing efforts.”

Flock Safety said that it works with law enforcement as a way to cut down on property crimes and that its systems capture only “objective evidence” of license plates and vehicle characteristics.

“We understand the concerns with technology capturing this type of public information, and we built the technology to protect people and equitably promote public safety,” spokesman Joshua Miller said in emailed comments.