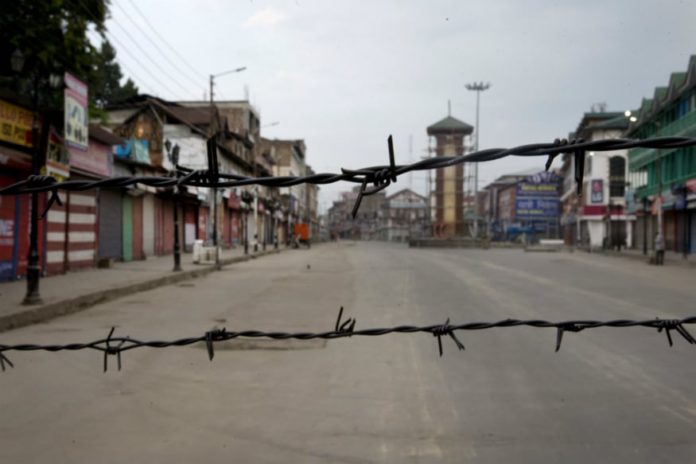 Srinagar, Aug 23:  Despite authorities lifting restrictions in Srinagar district from August 17, the famous ‘Sunday market’ in the heart of the city remained closed from the last about six months due to lockdown imposed by the authorities in March due to COVID-19 pandemic.

The district administration has also allowed traffic movement from August 19 after remaining suspended since March.

Srinagar is the worst affected district in J&K in terms of causalities with 194 deaths due to COVID-19 while the number of positive cases has also swelled with 7821 people testing positive for the infection so far.

The 3-km-long Sunday market from Tourist Reception Centre (TRC ) to Hari Singh High Street (HSHS), including Lal Chowk, the nerve centre of the summer capital, Srinagar, was deserted as vendors were not allowed to put up their stalls in the market in the city.

The continuous closure of the famous market, which attracts customers from across Kashmir valley, has badly affected to vendors, who claim that they have incured losses to the tune of crores of rupees. “I used to earn somewhere around Rs 5000 to Rs 7000 every Sunday in the flea market. But from last over six months, we (vendors) have not been allowed to set up stalls in the weekly market… that means vendors, including myself, have not earned any wages from last six months,” Tahir Ahmad, a vendor, told UNI.

Tahir said that they understand that the closure of the market was necessary in view of COVID-19 pandemic. However, he said authorities should make arrangement and issue guidelines and reopen the weekly market so that they can earn and feed their families with dignity and respect. “Many vendors were forced to work as labourer to feed their families. The authorities issued guidelines and allowed shops and business establishments were allowed to reopen. Public traffic was also allowed to ply on roads… so authorities should issue guidelines and allow us to reopen the market,” he added.

Similar views were expressed by other vendors, who used to put up stalls in the market.

The closure of the weekly flea market since March in the heart of the city had left people, particularly economically weaker section of the society, with no option but to celebrate Eid-ul-Fitr and Eid-ul-Adha without new clothes and other items, otherwise available in the market in reasonable rates.

The weekly flea market remained closed since March 8, about three weeks before J&K witnessed its first COVID-19-related death. The market used to attracts thousands of customers from different parts of the Valley. Business worth crores of rupees was done every week in the market in which goods, ranging from a hairpin to carpets, were sold on economical rates.

Meanwhile, new COVID-19 cases and deaths continued to rise unabated in the valley, where so far 563 people have lost their life to the virus while 24, 941 people have been infected. On Saturday 15 people, including 11 from Kashmir and four from Jammu, died to COVID-19 in the Union Territory, where the death toll stands at 608.

Newsfeed The Dispatch Staff - September 22, 2020
New Delhi: India on Tuesday rejected Pakistan’s contention that the Kashmir issue is one of the most long-standing disputes at the United...