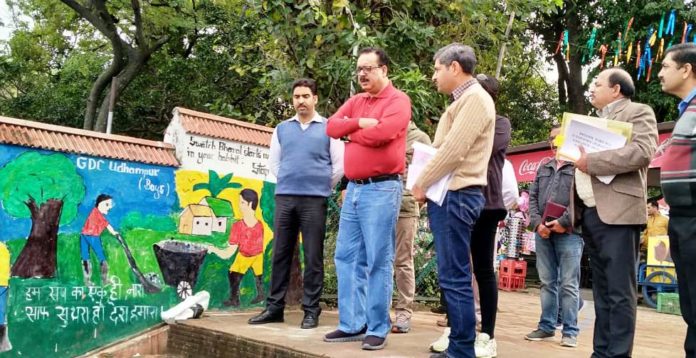 The Principal Secretary took a review of Tourism related issues and activities at Mansar and Surinsar in this regard.

He also directed for constructing a glass deck over the lake. The Principal Secretary also emphasised the need for installing a musical fountain at Mansar.

During his inspection of JKTDC facilities at Mansar, he directed Asgar Hussain, MD, JKTDC to establish a multi cuisine restaurant in the SMDA building and explore possibility of outsourcing the restaurant through a reputed restaurant brand.

The Principal Secretary stressed for introduction of environmental friendly e-rickshaws both at Mansar and Surinsar. He also directed the Engineering Wing to prepare a DPR for construction of underground drains around the periphery of lakes along with provision for Sewage Treatment Plants STP’s. He directed Nagendra Singh Jamwal, CEO, SMDA to immediately take up the renovation of Mansar Haveli which is a designated monument.

The Principal Secretary also inspected the Tourism related infrastructure at Surinsar Lake and directed for exploring the feasibility of establishing an aquarium. He stressed the need for augmenting the recreational facilities for tourists in the park.

The Principal Secretary called for making provision for rescue boats, All Terrain Vehicle ATV’s, mountain cycles and signages. He also directed for establishment of dedicated Bus stands at Mansar and Surinsar.  Later he also interacted with the local stakeholders. XEN SMDA, K.L Bhagat, AEE Tourism Rafiq and other officers were also present during the visit.