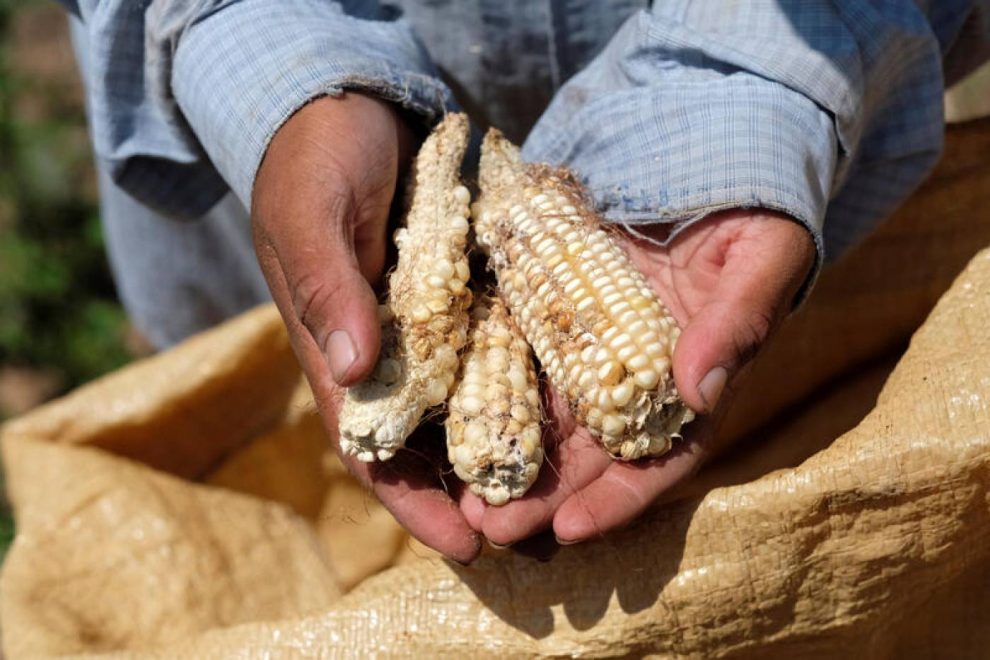 JOCOTAN, Guatemala: The back-to-back hurricanes destroyed a small patch of corn that helped Tomasa Mendoza feed her five children in a tiny hamlet nestled in the impoverished mountains of eastern Guatemala.

Even before the storms buried her crop in mud last month, Mendoza’s husband hadn’t worked for months after day-laboring coffee plantation jobs dried up during the coronavirus pandemic.

With food increasingly scarce, the children cry from hunger and are losing weight. One has a cough that won’t go away.

To survive, Mendoza is selling her chickens to buy grains of corn. She only has five hens left. Each will fetch $4.

“When they are gone, I’ll have nothing,” said Mendoza, a thin 34-year-old who lives in the El Naranjo hamlet in Jocotan municipality, bordering Honduras.

Jocotan sits in a Latin American region known as the Dry Corridor, which runs from southern Mexico and down to Panama, crossing parts of Guatemala, El Salvador, Honduras and Nicaragua along the way. It includes some of the areas that are most vulnerable to food shortages in the Western Hemisphere, pounded by year-after-year of crop-destroying droughts.

Then in the first half of November, Hurricanes Eta and Iota brought weeks of incessant rain, washing out bridges, toppling power lines and wrecking crops in Jocotan and across a wide swath of Central America.

The pandemic has compounded the problems. With measures to contain the coronavirus cutting off supplementary income for many, the number of people who suffer from severe food shortages has sharply increased across rural areas of Guatemala and Honduras.

In Guatemala, the problem is particularly severe. Even before the storms hit, some 3.7 million people – or more than a fifth of the population – were already suffering high levels of acute food insecurity, according to a report prepared for a United Nations hunger tracking body by the government’s Food and Nutritional Security Secretariat.

The U.N. defines acute food insecurity as food shortages that put people’s lives or livelihoods in immediate danger. Nearly half a million of those people were considered to be in a situation of emergency, the report said.

The report forecast a reduction in levels of hunger by early 2021, but it has not yet been updated to reflect the storms, which have been estimated as causing $5.5 billion of losses in Central America.

Guatemala’s President Alejandro Giammattei, overwhelmed by the scale of the damage, urged Washington in November to exempt Guatemalans arriving in the United States from deportation.

The droughts were a contributing factor to the mass migrations north in the past few years, and as Iota bore-down on the region on Nov. 16, Giammattei reminded wealthy nations that if they do not step up to help Central America’s economies recover from the storms, they would face “hordes” of new migrants.

The number of U.S. migrants from Central America is already ticking up to pre-pandemic levels.

But for most in Jocotan, moving to the United States is not an option: the journey’s typical cost of up to $14,000 is simply too expensive. Instead, they are trapped in cut-off villages, with little government aid, and diminishing supplies of food.

“We can’t migrate, because that requires money,” said Mendoza, speaking outside a modest home built of mud and sticks.

The effects are also felt in other countries through which the Dry Corridor runs, including in Honduras, which had 1.65 million people suffering high levels of acute food insecurity, or food shortages, according to a report prepared by the Honduran government using the same U.N. classification of hunger.

With large parts of Central America reeling from storm damage, coronavirus outbreaks and the fallout of years of drought, aid agencies seemed daunted by the scale of the task to keep people from tipping into extreme poverty.

“The combination of emergencies makes the emergency quadruple,” said Felipe Del Cid, operations manager for the International Federation of Red Cross and Red Crescent Societies, based in Panama. “The recovery could take years.”

The United Nations’ World Food Programme (WFP) forecasts that the fallout from coronavirus could push the number of people going hungry globally to 270 million by the end of the year – up 82% from before the pandemic. Latin America is the hardest hit region, the WFP said, reporting an almost three-fold rise in the number of people requiring food assistance.

The wider province that includes Jocotan is one of the worst affected in Guatemala, with four times the number of people suffering from severe food insecurity in May 2020 compared to a year earlier, according to data collected by international aid agency Oxfam.

The lessons of those who have tried to move away are chastening. The Ramirez family, in neighboring La Palmilla sold part of their land two years ago to pay for a trip to the United States. They were deported, and now can’t grow enough to eat on their remaining plot.

“We were screwed before the pandemic, and now everything is getting worse,” said 16-year-old Damian Ramirez. La Palmilla is now cut off from the rest of Jocotan after a bridge collapsed in the storms.

For many families in the area, children were already classified as malnourished after almost a decade of drought – some were even hospitalized for treatment. When the pandemic hit, even households that used to scrape by began skipping meals, seven families interviewed by Reuters said.

Guatemala’s informal economy, where 70% of the population works, has practically collapsed. Even before the pandemic struck, some 69% of the population lived in poverty, government data shows, with the share in rural areas as high as 80%.

To Jocotan community leader Eduardo Roque, the damage from the storms seems particularly cruel. Earlier in 2020, households with a little land were cautiously optimistic. Gentle rains had come and crops were ripening well for the first time in years.

Hurricanes Eta and Iota put an end to that hope.

“This is the worst year we have ever lived,” Roque said. “It was looking like the best harvest in 10 years after the drought,” speaking over a crackly connection from the municipality, where power has been out since Iota downed lines at the start of November.

“Then the pandemic came, and now, only God can help us,” he said, estimating that half of the coffee crop, a money spinner, was destroyed, while corn and beans were wiped out in mud slides.

On an October visit by Reuters to Jocotan, families said they had already reduced their diet to a few tortillas, wild weeds and herbs, and occasionally beans or an egg.

Worried parents described days without food and taking on debt to buy even staples of the Guatemalan diet as small government and charity handouts were running low.

Ivan Aguilar, a humanitarian program coordinator based in Guatemala at Oxfam, said the storms had complicated the outlook even more, with families who were relying on small crops for subsistence now teetering on the edge of disaster.

“The nutrition situation is going to get more acute,” Aguilar said. “Even in areas where the situation was not so bad.”

Prices for beans, a much-needed source of protein for those who cannot afford meat, have increased by about 30% when compared to the average price for the past three to five years, Aguilar has calculated, making them unaffordable for many.

Costs of staples of the Guatemalan diet, tortillas and corn, have increased in some areas as much as 20%, Aguilar says.

Guatemala’s Food and Nutritional Security Ministry said the storms would increase the vulnerability of families, and that the nutrition of children was most susceptible to deterioration. The ministry said studies to measure the impact were under way.