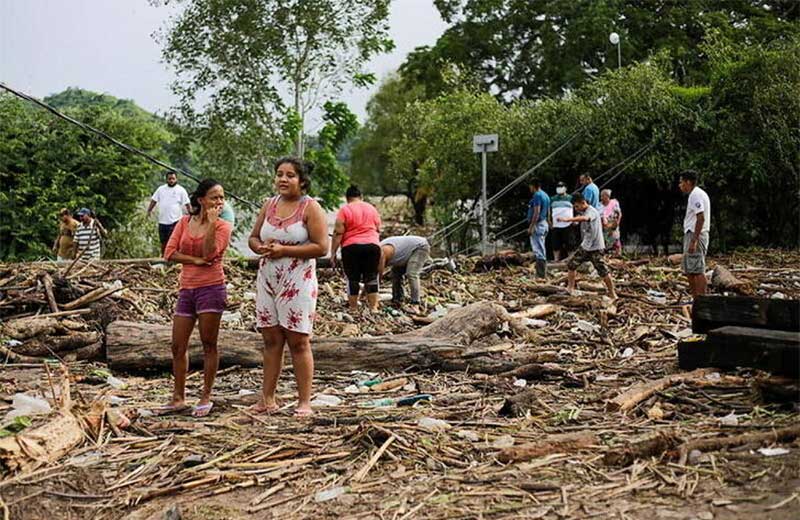 BOGOTA: Ruben Garcia not long ago had small herds of cattle and fields bursting with crops, and now the indigenous farmer in northern Nicaragua lies awake worrying how long it will be before he and his neighbors run out of food.

The wooden homes and tiny farms of the indigenous Miskito community stood little chance against the sustained winds of 150 mph as Hurricane Eta barreled along the Caribbean coast earlier this month.

The subsistence farmers in one of Nicaragua’s poorest areas will have little to eat in the wake of one of the most powerful storms to hit Central America in years, said Garcia, an indigenous leader.

“My community is totally devastated. We’ve lost everything,” Garcia told the Thomson Reuters Foundation by telephone near Nicaragua’s port city of Puerto Cabezas.

“I once had a house. It’s destroyed. We never imagined that we would become homeless overnight. I’ve lost my plantain and rice crops. We’re searching for cattle, the ones we find either dead or injured,” said Ruben, a father of three.

The storm hit just as the rice harvest was underway, leaving fields covered with mud and choked with fallen palm and coconut trees and branches, Garcia said. Crops in other fields were flooded.

Normally self-sufficient, “now we have to rely on food aid,” he said. “We have about 10 days left of food and then what? It’s a critical situation. It will take months for us to recover.”

Government food aid arrived within three days but has already run out in the villages that are home to about 1,000 indigenous people, Garcia said.

The priority of aid groups is getting drinking water and food to communities cut off by blocked roads and landslides, said Cairo Jarquin, an aid worker with charity Catholic Relief Services (CRS).

Across Central America, Storm Eta’s winds and flooding have killed at least 150 people, with another 2.5 million people affected in some way, such as losing their homes, businesses and crops, according to the United Nations humanitarian affairs agency (OCHA).

About 70,000 people are living in temporary shelters.

“People’s homes and livelihoods have been left in tatters,” said Moises Gonzalez, Latin America and the Caribbean representative for charity Christian Aid.

“Long-term, the impact on incomes will be significant, as many have lost the bulk of their crops and especially as the coffee harvest is due to start this month,” said Gonzalez, based in the Nicaraguan capital of Managua.

From rural communities to the urban poor, Central America already is suffering from the economic fallout of COVID-19, making recovery from the hurricane even harder.

“People have lost jobs, businesses are struggling,” said Felipe del Cid, Americas manager for the International Federation of Red Cross and Red Crescent Societies (IFRC). “As a result, families are experiencing a drastic reduction in their income and savings.

“The damage caused by Eta threatens to tip them further over the edge.”

In recent years, food shortages caused by extreme weather like hurricanes and prolonged droughts, exacerbated by climate change, have forced people from their homes and fueled migration in and outside of Central America, including to the United States.

“We also cannot ignore the impact this storm will have on displacement and migration in the region,” del Cid said.

“History shows us that disasters are likely to exacerbate displacement, caused by the loss of housing and the impact on unemployment,” he said.

Across Latin America and the Caribbean, 3.4 million people last year faced severe food insecurity, meaning they were unable to meet their daily basic food needs, according to the U.N. World Food Programme (WFP).

That number could quadruple to nearly 14 million people this year due in large part to COVID-19, the WFP has said.

There is no better future without Health For All: Health Minister Dr. Harsh Vardhan
2nd phase of Exercise Malabar 2020 to be conducted in Northern Arabian Sea from tomorrow
Comment