you would tumble from heaven

and taste the crystal stream,

so would your darkened shadow swell her

as the Jumna does at Prayag,

lending substance to a dream.

Gang-shikast: Encroachment of the Ganges, or any other river

THE TRUTH ABOUT THE KUMBH MELA
I wondered if anything I’d believed about the Maha Kumbh Mela—the largest gathering of human beings in the world, located within a temporary 20-square-kilometre radius that Harvard researchers call a ‘pop-up mega-city’ spanning the confluence on the Allahabad and the Jhunsi sides of the river—was actually true.
The only thing everyone can agree on is that the phrase Kumbh Mela unequivocally means ‘festival of water-pots’. (Astrologers equate Kumbh with Aquarius, the water carrier.) It’s a poignant name because it suggests that our ancestors have been trying to contain the river in some form for a long time. Beyond that, almost all key facts about the festival—when and where it began, why it is celebrated, when it is celebrated, how long it is celebrated for and even whether there is really an authentic scriptural justification for it—are up for grabs.
The beginnings of the festival supposedly lie in the story of sagar manthan—the battle in which gods and demons churned the oceans for soma, amrita, the nectar of immortality—the same battle commemorated by the Neelkanth Mahadev Temple I’d visited near Rishikesh, dedicated to the moment when Lord Shiva drank the halahala poison, which turned his throat blue. The celestial medic, Dhanvantari, put the nectar in a pot (kumbh) and carried it to paradise; on the way, as the story goes, he stopped in Prayag, Haridwar, Ujjain, and Nasik, spilling a few drops in each place. Today, the festival rotates among all four sites; the Maha Kumbh Mela in Prayag, which occurs every twelve years in order to mark an astrological milestone, is the largest.
One of the most oft-repeated superhuman claims is that the Maha Kumbh Mela has been celebrated since time immemorial, an unchanging and enduring tribute to Gangaji. For example, as historian Kama Maclean notes, in January 2001 India Today described the festival as follows:

In Prayag, Allahabad for modern India, it’s the biggest show on earth, conceived by Hinduism’s antique memory, conscripted by mythology, history and tradition, and enacted by keepers of wisdom and seekers of moksha. It’s the costume drama of nirvana and the passion-play of the East and the naked dance of asceticism and the hara-hara delirium of the hippie and the raw picturesque of pure faith rolled into one oversized panorama of India in its divine diversity—even in the digital age.

All this just modernizes the sentiments of Jawaharlal Nehru, who grew up in Allahabad, and wanted a portion of his ashes scattered at Triveni Sangam. Although Nehru was a staunch modernist, he justified his pride in the ‘eternal’ tradition of worshipping the Ganga:

I have had an attachment for the Ganga and Yamuna ever since my childhood, and as I get older this connection strengthens.[…] The Ganga is a symbol of India’s age-long culture and civilization, changeless, always flowing, but always the Ganga.… Of course, I have abandoned the old-fashioned traditions, and I want to break the chains which constrain India and oppress innumerable people and which prevent the development of their minds and bodies. But even though I want all of these things, I cannot completely separate myself from these old traditions. It is a great source of pride to me that this magnificent succession of heritage is ours, and will always be uniquely ours, and I know very well that I, like all of us, am a part of this chain, which will never, ever be broken, because this chain has gone on since the beginning of India’s eternal history. I could never break this chain, because I see such unbounded worth in it, and it gives me inspiration, courage and spirit.

Maclean asserts that it was the Magh Mela, not the Kumbh Mela, which has taken place for millennia. She suggests that in The Discovery of India, Nehru conflates the Magh and the Kumbh, since he says:

In my own city of Allahabad, or Hardwar, I would go to the great bathing festivals, the Kumbh Mela, and see hundreds of thousands of people come, as their forebears had come for thousands of years from all over India, to bathe in the Ganges. I would remember descriptions of these festivals written thirteen hundred years ago by Chinese pilgrims and others, and even then these festivals were ancient and lost in an unknown antiquity. What was the tremendous faith, I wondered, that had drawn our people for untold generations to this famous river of India?

Wade backwards and even deeper through the murky details, and you will find that, due to the astrological disagreement and lack of authoritative claim, in some years, like 1941 and 1942, or 1965 and 1966, the Kumbh Mela was held twelve months, not twelve years, apart in Allahabad. What’s more, there’s no Puranic mention of amrita falling in the four different cities. Some historians, like T. K. Bhattacharya, speculate that priests in the four cities, who were competing with each other for pilgrims, each grafted the Kumbh legend onto their own little stretch of the Ganga.
According to Maclean, ‘The British took a condescending view of religious flexibility of this kind.’ She quotes Edward Connolly from 1837, who damningly characterized the Hindu practice of naming local spots after more famous sacred places elsewhere: ‘By this simple process, the Hindu thinks to concentrate a quantity of holiness into a small space, and needy, feeble, or business-bound piety indulges in the plausible consolation of worshipping at home and at ease, the objects of a difficult and expensive pilgrimage.’
This condescending attitude downplays the extent of competition for choice riverside real estate amongst militant sadhus. The bottom line regarding the Kumbh Mela at the confluence of the three rivers is that the Triveni Sangam has long been a contested site where sadhus and the government have uneasily shared power. But, to put it in perspective, according to Lord Elphinstone, who served as the Magistrate of Allahabad, during just one of many turf battles between jousting Naga sadhus representing the opposing camps of Shiva and Vishnu at the Haridwar Kumbh, the body count was supposedly 18,000—in 1760! While that number may be an overstatement, Elphinstone summoned it in order to justify why the British government needed to oversee the religious festival.
Indeed, this tension between the colonial government and local religious leaders may have actually spawned the modern Kumbh. Maclean suggests that the Prayagwals invented the Kumbh around 1860, after the Mutiny, in order to drum up business more effectively. The Prayagwals are Brahmin priests who steer pilgrims through rituals at Prayag. They ‘establish their exclusive rights to serve pilgrims at the Triveni’ with reference to a firman by Emperor Akbar, dated 1593. After the British claimed Allahabad in 1801, the East India Company soon established a one-rupee-per-person pilgrim tax (plus parking fees). At the time, a person could have lived comfortably for a month on that amount. But it’s not just that; prior to the British, no one would have dreamed of associating fees with access to the river for spiritual purposes.
According to Maclean, the British and the Prayagwals didn’t trust each other. In the British view, the Prayagwals did everything they could to ‘[squeeze] those who come for salvation’, as a British writer in the 1830s noted. Meanwhile the Prayagwals did their best to convince pilgrims that the British were trying to convert everyone to Christianity. Because pilgrims came to the Sangam from all across India, this rumour spread throughout the country. Tension mounted over the decades and in June 1857, the Prayagwals joined the Mutiny of the 6th Native Infantry.
Colonel Neal’s ‘pacification’ of Allahabad involved attacking Daragunj, where ‘a nest of pryagwalas [sic] has been very troublesome in stopping communication over the Ganges by taking control over the bridge of boats.’ Many Prayagwals were persecuted and their land was confiscated. (It’s possible that the modern-day festival takes place on part of their ancestral land.) Nearly 1,500 families ‘were thereafter forced to live as beggars in obscure towns and in jungles to evade capture. The Prayagwals took aim against their rivals, the missionaries who often vied for pilgrims’ attention; they smashed the mission press and churches in Allahabad.’
Eventually, an uneasy and pragmatic truce was reached. This led to the increased importance of the Kumbh Mela as the place where religious authority figures could exercise their power, which was otherwise co-opted by colonial officials. This impulse to redefine the priests’ power seems to have been a life-preserving act on part of the British. Maclean cites a report in Allen’s Indian Mail, after the 1860 Magh Mela:

The spot opposite the confluence is covered with rude flagstaves; and it is strange that upon the flags themselves there are many allusions to occurrences which one would little expect to see commemorated close to the fort, and just under the muzzles of its guns. One flag represents a set of black soldiers, whom it is easy to identify as pandies (rebels), portrayed in the act of triumph over fallen enemies, and the faces of the slain are white. On another flag are seen a group of artillery men, engaged with a fort, which it is plain to see was intended to represent an English one. In every place are to be seen symbols of the bloody and cruel nature of heathenism, and it is not difficult to divine, from the scowls and mutterings of men as Europeans pass by, what they would do if they dared.

Even today, pilgrims rely on the flags to identify their own family’s Prayagwal and some flags have sepoys painted on them.
Despite so much contestation, it’s clear that the sandy floodplain across from the imposing fort, lined with the colourful flags and tin-shed enclosures, continues to play an integral role in the evolution of Indian-ness. 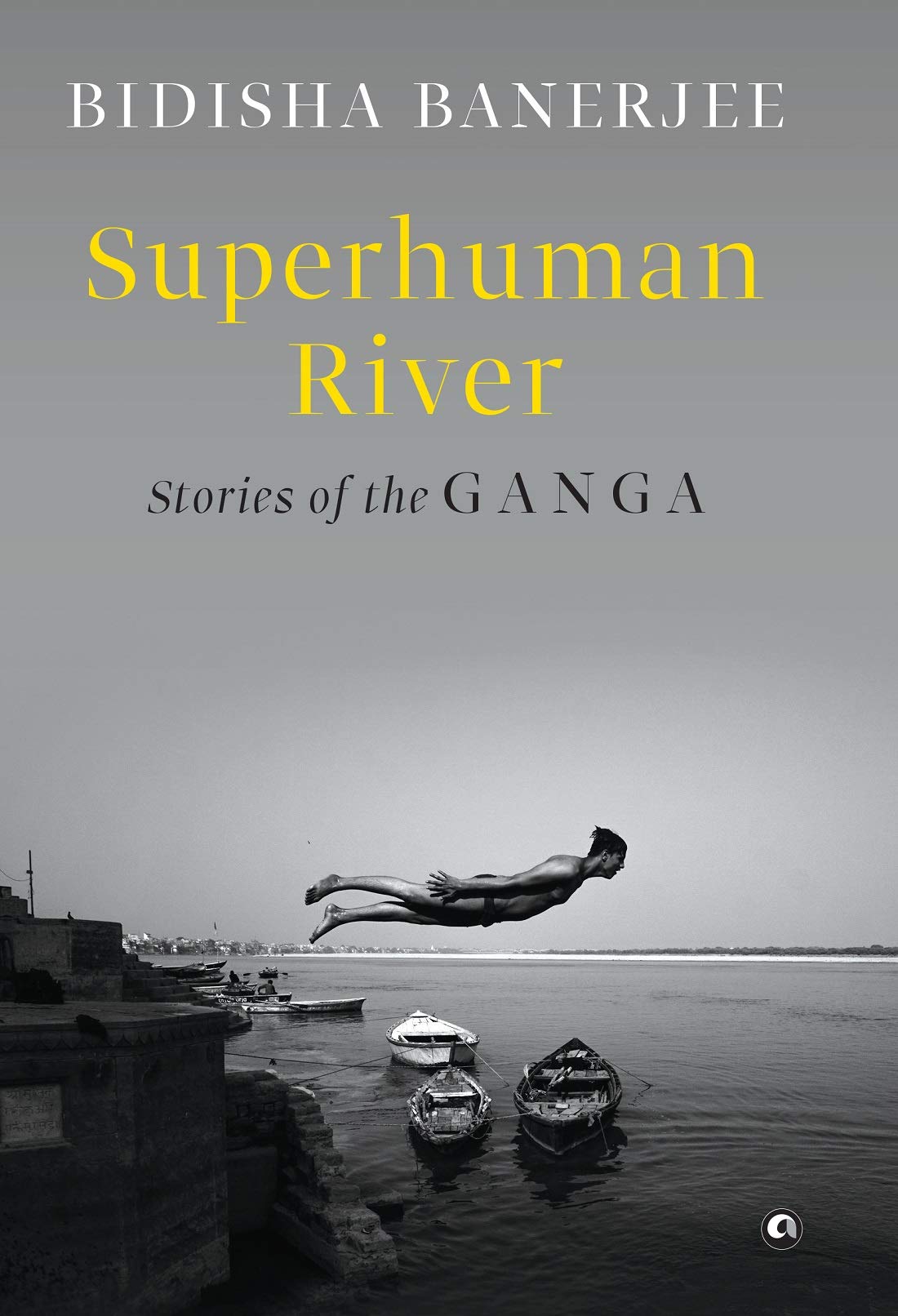 Excerpted with permission from Superhuman River: Stories of the Ganga, Bidisha Banerjee, Aleph Book Company. Read more about the book here and buy it here.