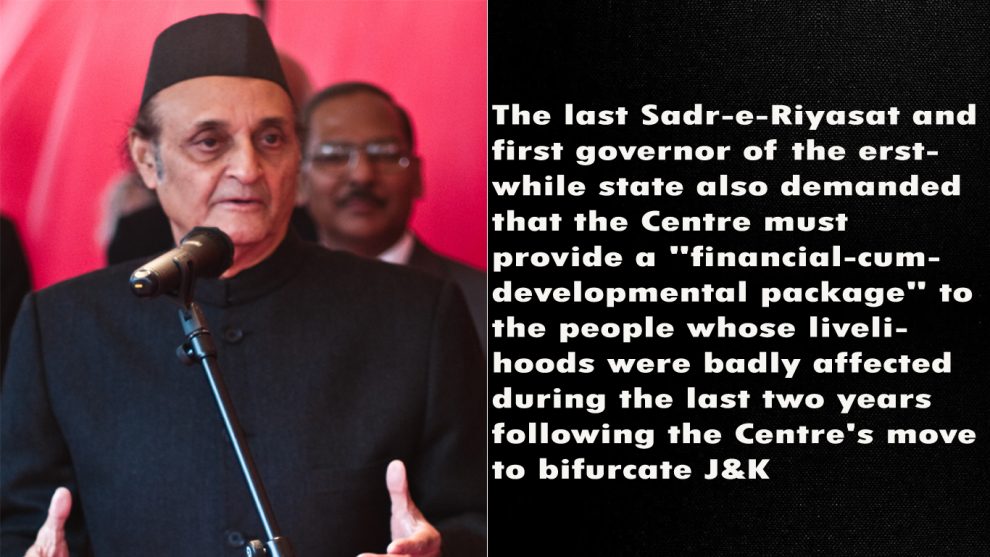 New Delhi: Describing Prime Minister Narendra Modi’s meeting with top political leaders from Jammu and Kashmir as a “very positive step”, veteran Congress leader and former J&K governor Karan Singh on Friday said statehood must be restored before holding assembly polls there and asserted that such a move would go a long way in helping to “heal the wounds” of the people.
Singh, the son of Maharaja Hari Singh who signed the terms of Kashmir’s accession in 1947, also said his personal opinion is that prima facie the revocation of special status under Article 370 seems “irreversible” but asserted that the matter was before the Supreme Court and it must be decided by the top court.

In an interview , the last Sadr-e-Riyasat and first governor of the erstwhile state also demanded that the Centre must provide a “financial-cum- developmental package” to the people whose livelihoods were badly affected during the last two years following the Centre’s move to bifurcate Jammu and Kashmir into two Union Territories and revoke its special status.

His remarks come a day after Modi held talks with top political leaders from Jammu and Kashmir and told them that the Centre’s priority is to strengthen grassroots democracy there for which delimitation has to happen quickly for polls to be held.

Reacting to the prime minister’s meeting with 14 political leaders of Jammu and Kashmir, including four former chief ministers, Singh said, “I definitely think it is a very positive step. First of all, because everybody was involved and people who once were discarded as anti-national, they all came — National Conference and Peoples Democratic Party both.”

“I believe everybody spoke their mind very frankly and the prime minister listened very attentively to everybody. Three and a half hours of the meeting was there and my own view is that it is a very positive move because something was needed to break the ice,” the former Union minister said.

The whole situation after the change of status had become “ossified politically”, Singh said, adding that the meeting was the start of a political process that is to be welcomed.

Asked about the demand of most of Jammu and Kashmir leaders of restoration of statehood, he said it was a unanimous view because after being in special status for 70 years suddenly to be demoted to not even a state down to a Union Territory is “something nobody in Jammu and Kashmir has appreciated”.

“So statehood is a universal demand, the question is timing. Now as I understand the situation, the first step now is delimitation. The delimitation commission is already working, they should submit their report very soon. After delimitation then the next step is elections. My own view is that…we should have elections as a full state,” Singh said.

He asserted that full statehood for Jammu and Kashmir should definitely be restored before assembly elections because if it goes to polls as a Union territory and then becomes a state, that would not make any sense because the situations are different with difference in status.

“As soon as possible, we should get statehood, I mean if we get it tomorrow there is nothing like it but in any case when we fight the next elections we must fight them as a full-fledged state,” the 90-year-old leader said.

Singh also lamented that it was a “strange irony” that his father signed the instrument of accession for the whole state and “today we are having to fight for statehood”.

Asked if statehood could reduce “dil ki doori’ — a term used by Prime Minister Modi at the meeting, Singh said restoring statehood will go a long way to help “heal the wounds”.

“By itself, it won’t be enough but it would definitely be a major step,” he added.

Asked about calls from a section for restoring Article 370 provisions that granted special status to J&K and were abrogated in 2019, Singh said, “My personal belief in this is that it seems to me prima facie that the changes are irreversible but the matter is before the Supreme Court so we shouldn’t unnecessarily make any detailed comment on it what should be done and what should not be done.”

The veteran Congress leader urged the Supreme Court to take up the matter soon, asserting that it was a very crucial and important issue that should be given priority. Asked about divergent views struck by Congress leaders on the Article 370 issue, Singh said he was not a Congress spokesperson and would not want to speak on behalf of the party.

“I expressed my personal view that it did not seem to me that Article 370 can be restored…My view may be slightly divergent from others. But the consensus is what Ghulam Nabi (Azad) said” and the matter is before the Supreme Court and they will decide on it.

Asked what were his expectations from the Centre on J&K going forward, Singh said he expected that they would move forward as they say on delimitation, elections and statehood.

Demanding a financial-cum- developmental package for the people of J&K, Singh said for two years the state suffered very heavily.

“The whole Kashmir Valley, the horticulture was destroyed, tourism which is our mainstay was destroyed so tens of hundreds of crores of losses were suffered,” he said, adding that in Jammu also heavy losses were incurred.

“So they should first compensate those people who lost during those two years,” he said.

Modi’s J&K outreach saw the prime minister conveying to the 14 political leaders from the union territory during their face-to-face meeting here that he wanted to end the ‘Dilli ki Doori’ as well as ‘Dil ki Doori’ (distance from Delhi as well as the distance of hearts) with Jammu and Kashmir, which has witnessed a prolonged spell of militancy and unrest.

The four former chief ministers of the erstwhile state who participated in the discussions were Farooq Abdullah and his son Omar Abdullah of the National Conference, Congress’ Ghulam Nabi Azad and PDP chief Mehbooba Mufti.

This was the first interaction between the top leadership of the Union government and mainstream parties in J&K since August 5, 2019, when the Centre revoked its special status provided under Article 370 and bifurcated the border state into Union Territories of Jammu and Kashmir and Ladakh.

Measures will be intensified to curb militancy in J&K: DGP
Shopian encounter: One militant killed, another surrenders, operation on
Comment