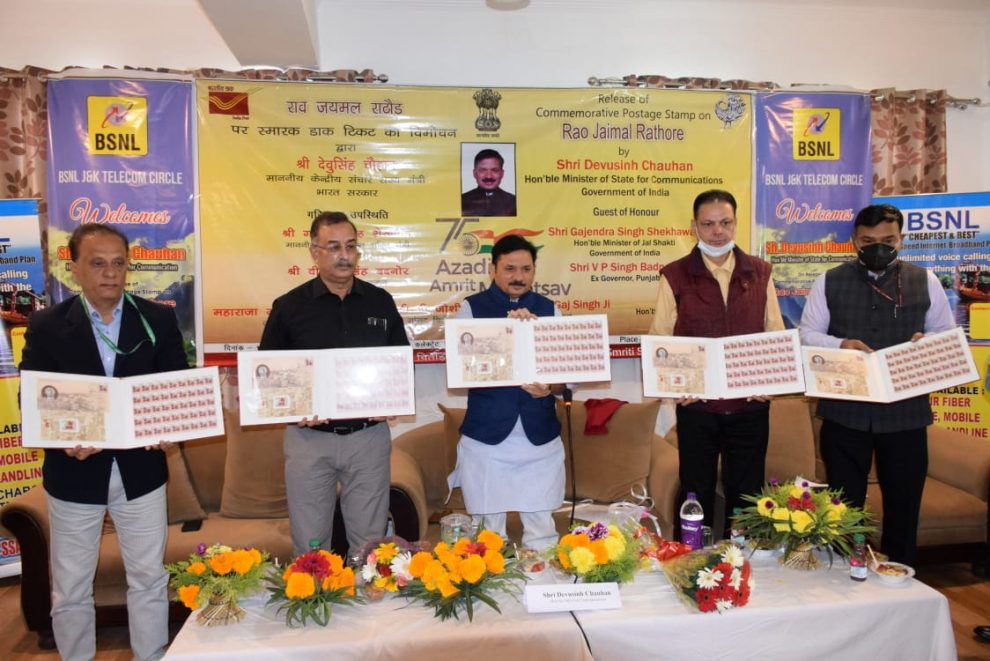 Chauhan said that when the nation is celebrating the Azadi ka Amrit Mahotsav, it should be our real endeavor to remember these unsung heroes of our history. He said that such national heroes deserve to be recognised and remembered for the bravery and valour they depicted in safeguarding this land and its people.
FacebookTwitterPinterestWhatsApp

Jammu: On Kashmir visit as part of the round two of Modi government’s unprecedented ministerial outreach to Jammu and Kashmir, the Union Minister of State for Communications Devusinh Jaisingbhai Chauhan launched a postal stamp in memory of Rao Jaimal Rathore, a Rajput warrior who fought against Akbar some 500 years ago.

The event held at the picturesque high altitude resort of Sonamarg in central Kashmir was quite high profile in terms of participation. Besides another visiting Minister accompanying Chauhan, the postal stamp release event was also attended by several Parliamentarians and Legislators from Rajasthan as also a former Governor and a number of high ranking officials.

Minister Chauhan said, Rathore was a Rajput warrior general of Chittorgarh who put up a defiant resistance against vast Mughal army during its siege in 1567-1568. He described himself fortunate to get the chance of releasing postage stamp commemorating such a brave soldier. He maintained that the brave heart not only made the people of Rajasthan proud but whole nation feels pride to have him.

Chauhan said that when the nation is celebrating the Azadi ka Amrit Mahotsav, it should be our real endeavor to remember these unsung heroes of our history. He said that such national heroes deserve to be recognised and remembered for the bravery and valour they depicted in safeguarding this land and its people.

Who was Rao Jaimal Rathore

Not much is known about the life of Jaimal but there is an interesting story around his death which immortalizes him in the history. Historical sources say that Jaimal was chief musketeer of Maiwar ruler Udai Singh II who caught Akbar’s personal attention after being killed by none other than himself.

According to some historical accounts, in 1567, when Akbar encamped outside Chittorgarh, in hopes of conquering the fortress, the ruler of Mewar, Udai Singh II, fled to the Aravali hills alongside his family, and left the fortress in charge of 8,000 soldiers and 1,000 musketeers, who were in command of Jaimal and Patta. Jaimal died in Chittorgarh on 22 February 1568 by a musket shot fired by Akbar himself. This turned the tide of battle in the Siege of Chittorgarh and the Rajputs’ morale decreased. Jaimal’s name is commonly mentioned with his partner leader of chittor, Patta. These two were given the command of the army when Udai Singh, along with the royal family, had to leave the fort and go to the hills. Their attempts to repulse the Mughal Emperor himself were such that Akbar himself ordered the construction of their statues outside his fort in Agra to honour their courage.

“At this time H.M.(Akbar) perceived that a person clothed in a cuirass known as the hazār mīkhī (thousand nails) which is a mark of chieftainship among them, came to the breach and superintended the proceedings. It was not known who he was. H.M. took his gun Sangrām, which is one of the special guns, and aimed it at him….. And in fact on the morning when the breeze of victory and dominion arose, it was ascertained that the Shāhinshāh’s musket had reached Jaimal, the governor of the fort, and had at once destroyed both him and the fort.”

The Minister appreciated the idea of releasing postal stamps in memory of such national heroes. He hoped that more such commemorations should be organised in future. He called them as lessons to inspire our youth and make them aware about their valiant past.

The Union Minister of Jal Shakti, Shri Gajendra Singh Shekhawat, who participated virtually in the event said that the contribution of the warrior is such that even after passing of more than 500 years the memory is preserved in human psyche. He said that such stories as that of Rao Jaimal Rathore needs to be told to our children and youngsters.

Eulogising further, Shekhawat, who was guest of honour on the occasion said that the story has power to inspire and motivate our youth towards national service. He recalled that such was the gallantry of this general that his statue on elephant back has been erected inside Agra fort.

CP Joshi, MP Chittorgarh, who also participated virtually said that the great soldier fought despite receiving bullet in his foot. He said that his laying of life in protecting his land is worth writing in golden letters.

Others who spoke virtually include Shri VP Singh, Ex-Governor Punjab; Maharaj Gaj Singh and other legislators and officers from Rajasthan.

The stamp was released in a virtual mode simultaneously from IT Centre, Chittorgarh Rajasthan.