Srinagar was ruled by the Mauryan empire till around the 14th century and it was emperor Ashoka, who had introduced Buddhism to the valley of Kashmir. The Kushans believed to have controlled this region during the first century who ruled over this place from their stronghold at Pakistan and Afghanistan. Even King Vikramaditya from Ujjain, ruled over this place before transferring the reigns of control to a nomaid tribe named Huns during the 6th century. One of the most terrified rulers of the city was Mihirkula who belonged to this tribe.

After the 14th century, the city came under the Mughal rule and was ruled by the Muslim Kings. This city was made the capital during the rule of Yusuf Shah Chak who was then tricked to death by Akbar who set up his dominion on the city post the fall of Yusuf Shah Chak. It was in the year 1707 that the Mughal dominion came to en end with the death of their last King, Aurangzeb and then Srinagar came under the reign of the Durrani Empire. This empire was the leader of the Pasthun tribe and they ruled on Srinagar for multiple decades. It was in 1814 that the rule of Sikhs was established and Maharaja Ranjit Singh ruled over Kashmir. It was ruled by the Sikhs till the British Raj came into India. Till the year 1947 Srinagar was considered as a princely state in the British India.

Srinagar is one of several places that have been called the “Venice of the East” or the “Kashmiri Venice”.

Lakes around the city include Dal Lake – noted for its houseboats – and Nigeen Lake.Srinagar has some Mughal gardens, forming a part of those laid by the Mughal emperors across the Indian subcontinent. Those of Srinagar and its close vicinity include:

The Chashma Shahi (Royal Spring) Garden showcases the serene beauty of Mughal designs. Experience nature at its most ornate as you climb the garden’s terraces, which are interspersed with polished walkways, colorful plants and carved water features.

The Badamwari Garden is located on the hills of Koh-e-Maran and is a great tourist attraction. It is a 300 kanals garden and has plenty of trees, flowers and bushes. This garden is visited by a large number of nature lovers and visitors. There are no actual records about the construction of the garden. It is believed that the temple was built before the rule of Sultan Zain-ul-Abidin in the 14th century. A marvellous dome is built in the middle of the garden. In the ancient days, the people of Kashmir celebrated the harvest festival in the spring months. The Badamwari Garden is in full bloom during the spring season.

Nagin Lake in Srinagar is a deep blue water offshoot lake of Dal Lake that is interconnected by a thin causeway. The lake is located to the east of the city of Srinagar, at the foothill of the Zabarwan Mountain. The Shankaracharya Hill on the south and Hari Parbat on the west enclose the Nagin Lake offers breathtaking views to the visitors. It is flanked by beautiful willow and poplar trees. Good numbers of houseboats and shikaras can be seen in Nagin Lake where tourists enjoy their peaceful vacations in Srinagar. Unlike Dal Lake, Nagin Lake is a calm, serene and peaceful getaway for those who want to spend holiday in sheer nature. Apart from houseboat staying and shikara ride, tourists can also enjoy water skiing, motor rides and sailing over there. 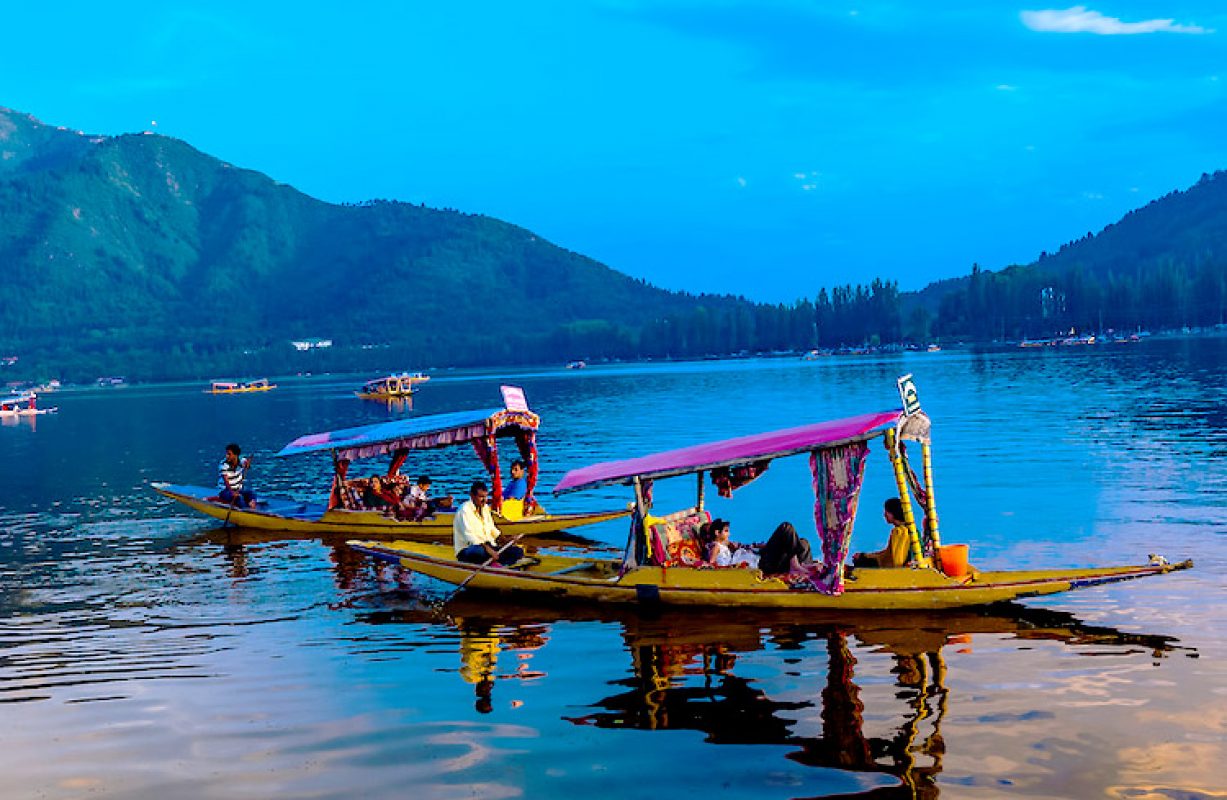 Over 15km around, Dal Lake is Srinagar’s jewel, a vast sheet of water reflecting the carved wooden balconies of the houseboats and the misty peaks of the Pir Panjal mountains. Flotillas of gaily painted shikaras (gondola-like taxi boats) skiff around the lake, transporting goods to market, children to school and travellers to delightful houseboats inspired by originals from the Raj era.

The Hari Parbat Fort is an iconic site, visible from anywhere in Srinagar on its perch atop Sharika Hill. Climb to this Mughal fortification, learn about the ancient rulers of India’s Kashmir district, stop by sacred spiritual shrines and capture spectacular views of Dal Lake.

Sharika Hill itself holds great spiritual significance. It is believed to be a gargantuan stone that was dropped onto the demon Jalobhava, who once oppressed the region. Note the Sikh, Hindu and Muslim landmarks built upon the slopes of this spiritually charged locale.

Tackle the hill from one of two directions. Approach from the south to pass through the Gurdwara Chatti Patshahi, a resplendent gateway that is sacred in Sikh culture. Admire the ornate domes atop this cream-white building, and then continue to the Makhdoom Sahib Shrine. The multi-columned façade of this Muslim landmark makes for a dramatic photo.

Alternatively, begin your ascent from Hawal and pass by the Sharika Temple. This site is revered by the Hindu practitioners who pray to the multi-armed goddess Jagadamba Sharika Bhagwati beneath the temple’s white-and-orange domes.

As you near the fort, admire the walls that appear to be carved out of the very hilltop itself. Its construction began with Akbar, a Mughal emperor, in 1590. His project, however, was not completed until 1808, under the rule of Shuja Shah Durrani.

The fort was opened to the public in 2014, allowing for guided tours of the Kallai Ander (inner walls) and Badamvaer (almond garden). Learn about the fort’s history and significance as you explore its defenses and chambers.

Dachigam National Park is located 22 km from Srinagar in Jammu and Kashmir. The name literally stands for ‘ten villages’, which could be in memory of the ten villages that were relocated in order to create the park. The Park is only 141 sq. kms. and roughly rectangular in shape, approximately 23.5km by 6km. It is best considered as two sections – Upper and Lower Dachigam. Lower Dachigam, in the west, comprises approximately a third of the total area and is the area most accessible to a visitor. Upper Dachigam in the east extends over the higher reaches and is a good day’s trek from the nearest roadhead.

Harwan is a small village located 3 km beyond the Shalimar Garden in Srinagar District of Jammu and Kashmir. The village was identified by Sir Aurel Stein with Shadarhadvana (grove of six saints).

Harwan is about 21 km from Srinagar. It is a historic place and many remains of the past have been found during the excavations. The specialty of the Harwan monuments is that they are the only remains of their kind in India (possibly in the world), and that they supply a life-like representation of the features of those mysterious people, the Kushans.

A large number of broken fingers and toes of terra-cotta figures, and terra-cotta curls belonging to images of Buddha are found from the excavated site. Places of tourist interest are an ancient triple base of a medium-sized stupa and a chapel, Harwan Garden and Harwan Lake. A trout hatchery in the vicinity is worth visiting. Nearest railhead is at Jammu, 300 km away. Regular buses connect Harwan with Srinagar, where the nearest airport is.

Have you ever stepped into an arbour and felt like wow… that is truly beautiful? Well, imagine the same kind of view, but on a larger scale at the Tulip Festival held at the Tulip Garden in Srinagar. Your Kashmir vacays are incomplete without a trip to this beautiful garden. Called the Indira Gandhi Memorial Tulip Garden, it is one of the largest gardens in Asia. Snuggled on the foothills of the Zabarwan mountain range at an altitude of 5600 ft, overlooking the fabulous Dal Lake in Siraj Bagh, this garden is home to several flower species other than tulips like the Daffodils, Hyacinths, Roses, Ranunculi, Muscaria, Iris, etc

The gardens were built in 1969, situated around the base of a hill overlooking Dal Lake. Enjoy the scenic locale as you explore its 197 acres (80 hectares), embellished by hedgerows, flower displays and maintained lawns.

PariMahal, literally meaning The Fairies’ Abode is a beautiful seven terraced garden that overlooks the striking city of Srinagar from the top of the Zabarwan mountain range. The garden is located towards the South-west of the famous Dal Lake. PariMahal belongs to the Mughal period hence its architecture portrays the beautiful Islamic architecture that was one of the patronages during the rule of the Mughal emperor Shah Jahan.

The architecture of the garden includes a small spring, surrounded by outlandish flowers and ornamental plants arranged out in terraces vanquished by the remains of the exquisite building. The monument is lightened during the night and the magnificent view of the illumed building at the top of the hill can be viewed from most of the places in Srinagar. This splendid monument reveals the grandeur of the taste of the Mughal emperors. The ruins of the building still showcase the rich history of the Mughal period. Nonetheless it is one of the most to visit places in Srinagar.

The Mughal Gardens (Nishat Bagh) have been a sanctuary of peaceful contemplation since the site’s construction centuries ago. Take your time climbing the manicured landscape, enjoying shady cedar trees and fountain displays along the way.

These gardens were built on the eastern bank of Dal Lake in 1633 by Mughal Emperor Asif Khan. Note the distinctly Persian feel to this 46-acre (18.5-hectare) commons. A central aqueduct, which carries water down a terraced structure, is typical of Mughal design. The 12 terraces represent the signs of the zodiac.

Experience the calm environment that once enchanted Mughal royalty at the Shalimar Bagh. This verdant garden, covering a prime 31-acre (12.4-hectare) area on the eastern banks of Kashmir’s Dal Lake, is a place to slow down and enjoy nature.

The garden’s name is a Sanskrit term meaning “abode of love.” When Mughal Emperor Jahangir built the gardens in 1619, they were a gift for his wife, Nor Jahan. Experience the same lakeside vistas that enamored this Mughal queen.

The Sher Garhi Palace houses administrative buildings from the state government. Another palace of the Maharajas, the Gulab Bhavan, has now become the Lalit Grand Palace hotel. The Shankaracharya Temple on the hill top in the middle of the city, is important Hindu temple in the city.