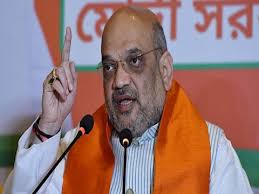 Union Home Minister Amit Shah on Wednesday said that the spirit of Nehru-Liyaqat Pact was not followed by the neighboring country, which led to the need for bringing the Citizenship (Amendment) Bill, 2019.
“The spirit of Liaquat-Nehru Pact was not followed by the neighboring country. It is the duty of every government to follow it in letter and spirit,” said Shah, while replying to the debate on the Citizenship (Amendment) Bill in the Rajya Sabha. According to Nehru-Liyaqat Pact, it was promised that religious minorities of each country would get equal opportunities in politics, services, and permission to practice the faith.
The pact was signed between Indian Prime Minister Jawaharlal Nehru and Pakistani Prime Minister Liaquat Ali Khan in 1950.

“What happened to that promise? I can quote several laws of Pakistan. You can’t fight election there … What happened to minorities? From CJI, President, Vice President, ECI Chief to Rajya Sabha chairman, every post was held by Muslims in India,” Shah said.”During the UPA government, then Rajasthan government wrote to then Home Minister P Chidambaram stating outstanding issue of a large number of Pakistani refugees from Hindu and Sikh communities. 13,000 people from two religions only were benefited, whereas we have included refugees from six religions,” he said.
Shah said that the Bill has been brought to rectify a historic blunder and due to Pakistan’s failure to protect its minorities.