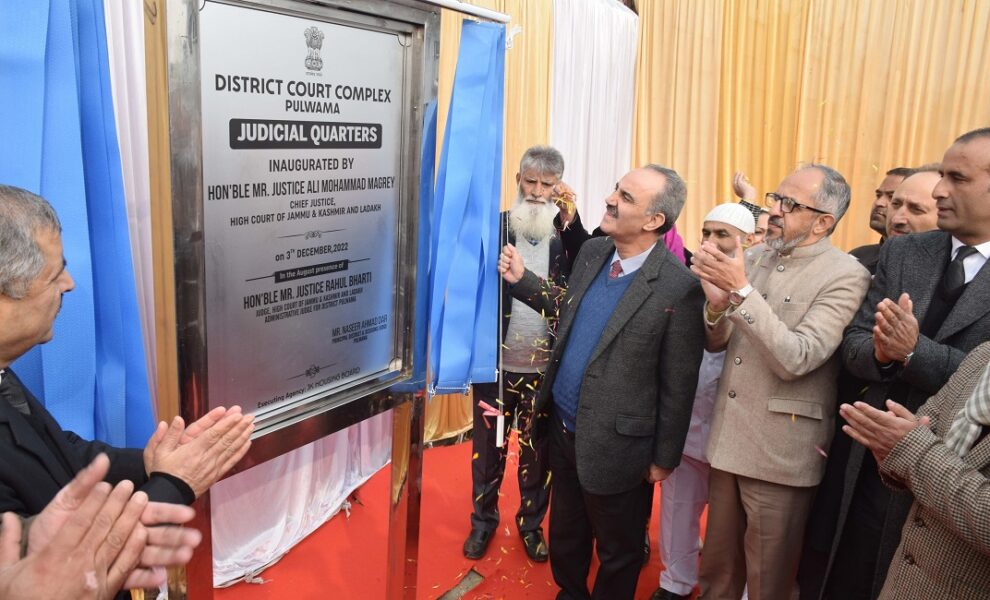 PULWAMA: Exhorting the judicial fraternity to strengthen the Judicial system, Chief Justice, High Court of Jammu & Kashmir and Ladakh, Justice Ali Mohammad Magrey on Saturday said that the judges and bar members have to share collective responsibility of ensuring speedy justice to all.

During his presidential address, Justice Magrey lauded the role of Advocates in justice dispensation.

Justice Magrey said that one should serve the society in all capacities and try to become  voice of voiceless.

“We have to strengthen the Judicial system making it accessible to all especially weaker sections of the society,” he said adding that we as judges and bar members have to share collective responsibility of ensuring speedy justice to all.

Chief Justice said that it feels great to see females lawyers working in such a professional manner. “Times have gone when parents used to be hesitant in sending their daughters in the field of law”, he maintained.

Justice Magrey urged upon the judges to prioritize disposal of old cases pending in the district court. He also asked the Advocates to extend full cooperation to the bench. He said that relationship between bar and bench should be cordial  for smooth running of the system.

He said that Pulwama occupies second place in Jammu and Kashmir and Ladakh as far as infrastructure development is concerned. He said that it is a matter of great satisfaction that all requisite facilities are in place in Pulwama Court for the advocates.

Chief Justice lauded the Deputy Commissioner Pulwama for identifying another ten kanal of land  for the court complex. Reacting to the request of President  Bar Association Pulwama regarding exclusive  Juvenile  Board and NDPS Court,  Chief Justice said that  it is the duty of society to take care of our children who are in conflict with law and also to get rid of menace of drugs.

Regarding shortage of judges, he said that the administration is trying it’s level best to fill all the vacancies and full court has recently referred 65 adhoc posts of Munsiffs and the process to fill the same is in progress.

Principal District and Sessions Judge Pulwama, Naseer Ahmed Dar, appreciated Chief Justice for deeply understanding the pain and agony faced by the litigants living in the remote areas of the Union Territory. He also applauded Chief Justice for according special emphasis on augmentation and improvement of court infrastructure.

President Bar Association Pulwama thanked Chief Justice and administrative Judge for inaugurating Lawyers chamber and utility complex including library and Bar room canteen. He requested for considering the problem being faced by the stamp vendors.

Justice Rahul Bharti welcomed Chief Justice and expressed gratitude to him for visiting the District and inaugurating  the lawyer chamber and residential quarters.