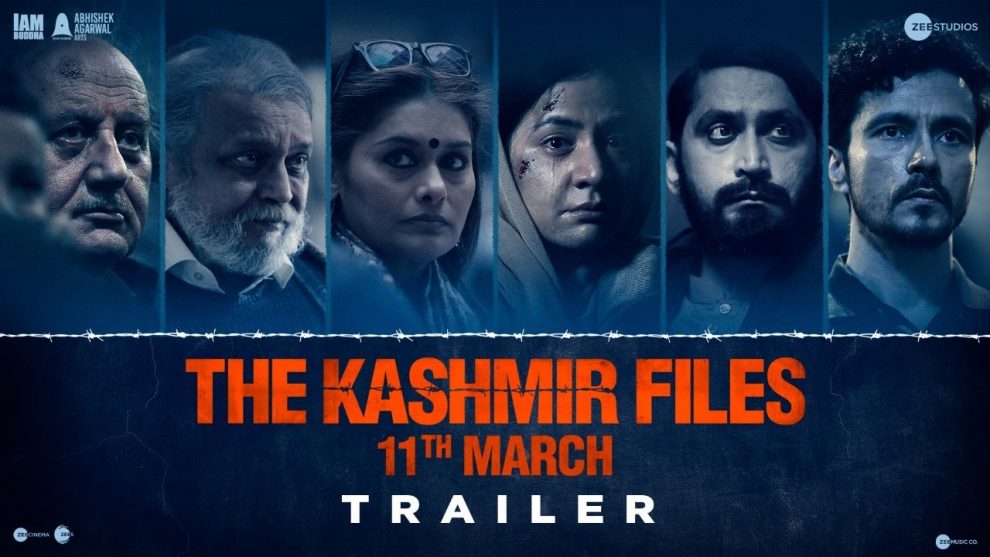 JAMMU: The premiere of a Bollywood movie ‘The Kashmir Files’, was held in Jammu, just a week before its theatrical release.

‘The Kashmir Files’, a film based on the displacement of Kashmiri Pandits from the Kashmir Valley in the 1990s, was held in Jammu on Friday evening. The movie will hit the silver screen on March 11.

Interacting with media after the special screening, Producer, Director Vivek Agnihotri claimed that there is nothing political about the story, adding, ‘The Kashmir Files’ will reveal an untold story of the 1990 exodus that forced hundreds of Kashmir Hindus to migrate from the Kashmir valley.

The special screening of  The filmmaker Vivek Agnihotri flanked by wife and actress Pallavi Joshi claimed that the film will bring truth and an untold story of the Kashmir Hindus of 1990s exodus to the public.

He was addressing a presser here this morning. “The movie will bring out the truth about exodus and displacement of Kashmiri Pandits,” said Agnihotri further, claiming that linking the Kashmir solution through the ‘The Kashmir Files’ with politics or political set up will be wrong because, in democracy, politics is run by vote banks. “There is no vote bank of Kashmiri Pandits in Jammu and Kashmir, so perhaps it could not be resolved,” he said.

On the film landing into the controversy before its release as some people have knocked the doors of the judiciary objecting to certain scenes, Agnihotri took a dig at these sections of people and said, “Whatever is shown in the film is based on truth.” He said the slogans raised in Kashmir or whatever was written on the walls in 1990, everything is shown as it is in the film, which actually is bothering many people.

“The project of ‘The Kashmir Files’ started in 2018 and it took four years of hard research,” he said, stating that it is a film, which to date no one has tried to bring it to the silver screen. He claimed that the genocide that took place in Kashmir in 1990 is true. “We have interviewed the people who have been victim to the massacre, spoken to the government officials, police officers, subject experts and also interviewed many sections to script this untold story,” he added.

The Director said after the revocation of Article 370 in Jammu and Kashmir on August 5, 2019, a campaign for Free Kashmir in America was launched, but after ‘The Kashmir Files’ was screened in the US, for the first time in the Capital Hills, a reception was organised for the entire crew wherein it was “accepted” and “admitted” that it was the biggest tragedy and genocide in the world.

Earlier, the special screening of the movie was organized on Friday evening for exiled Kashmiri Pandits community, who had faced mass migration from Kashmir valley in the early 90s due to the upspring of Militancy.

The makers of ‘The Kashmir Files’ including National award-winning filmmaker Vivek Ranjan Agnihotri and cast – Pallavi Joshi, Darshan Kumaar and Bhasha Sumbli hosted a special screening of the exodus drama.

Politicians, Army Officers and known Kashmiri Pandits are specially invited for screening of ‘The Kashmir Files’.

Among the invitees, Director General of Police (DGP) Dilbag Singh said that the Hindi film ‘The Kashmir Files’ brought back memories of the difficult times in Kashmir.

Talking to reporters after the screening, the Jammu and Kashmir Police chief said, “Some scenes are close to reality. In totality, it is a good film.” He said the film brought back memories of the difficult times in Kashmir.