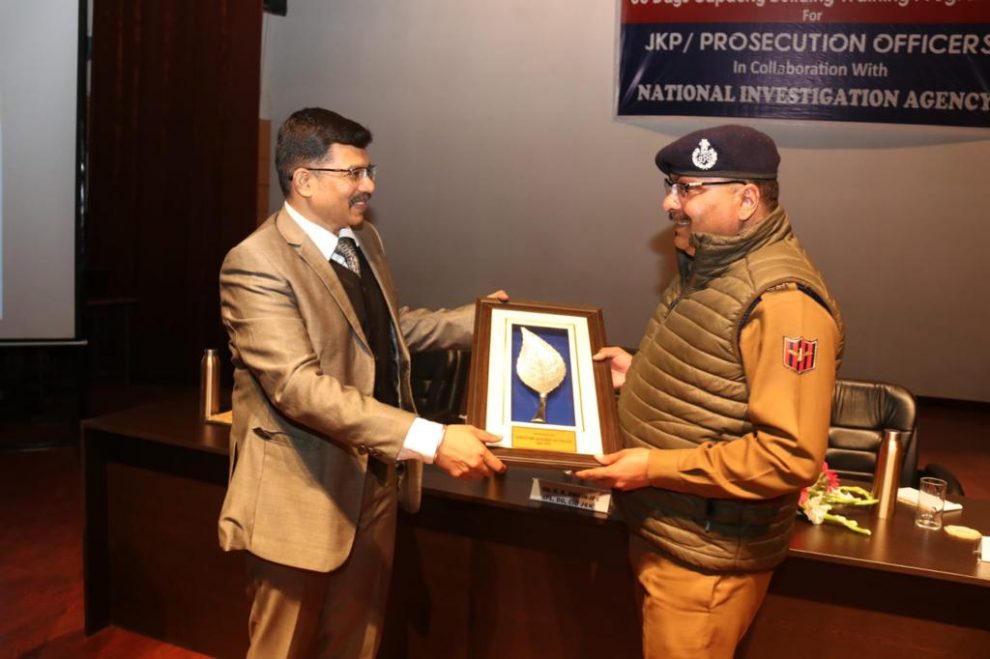 JAMMU: The three day capacity building training programme of JKP and Prosecuting officers with NIA concluded today. Director-General of Police, Dilbag Singh was the Chief Guest at the valedictory function.

DGP while speaking on the occasion appreciated the ADGP Jammu, officers from NIA and AIG (Training/Policy) PHQ for conducting the programme. He said that with the kind cooperation of DG NIA, Kuldiep Singh we have been able to organize the 4th course on investigation of special crimes especially UAPA cases for JKP investigators. He expressed his hope for organizing more programmes in future.

Shri Singh said that during these four programmes around 500 officers were trained in special investigation skills and added that this is a sizeable number to deal with the kind of workload the JK Police has in the form of UAPA and other cases of special nature. He advised the trainee officers that whatever they have learnt during the training programme should be carried forward in the larger interest of the organization. The DGP said that for effective investigations the timeline and chain of events is very important. Citing the examples of various cases, the DGP said that sometimes techniques of the investigation become more important and help to supplement the evidence.

He further said that organizing these training programmes is a part of the Police headquarters’ initiative of upgrading and updating the investigation skills of officers and personnel of Jammu and Kashmir Police.

Spl DG CID R R Swain on the occasion said that J&K Police has done exceptionally well in counter-terror operations and it is time that investigation has to be taken at a different level, he added. He said that organizing capacity building programmes is absolutely essential to create a culture of investigation and excel in the field of investigation.

DIG NIA Kaliraj Mahesh Kumar in his speech said that J&K Police is one of the best forces in the country. He said that during the three days training programme the NIA faculty has provided detailed inputs about the various aspects of the investigation and hoped that the officers of J&K Police would definitely benefit from this capacity building initiative.

Pertinent to mention that 142 officers Jammu Zone, SIA, Prosecution services which include 01 SsP, 15 DySsP, 11 Senior Prosecuting officers, and 115 Non-Gazetted investigating officers of J&K Police participated in the capacity building training programme which started on 23rd of this month. The topics covered during the three days training programme were effective enforcement of ULA (P) Act, Recent Trends, Major routes and Modus Operandi of Drug trafficking, Narco-Terrorism and its impact on National security, Intelligence collection and cultivation of sources, Introduction to the investigation of Dark-net and Crypto-currencies in Drug Trafficking, Provision and procedure of search, seizure, arrest in Drug cases, Procedural Lapse and Major Lacunae in procedure of booking NDPS cases and during investigation, Pre and post Trial Disposal of Seized Drugs.

The training programme was conducted by the AIG (Training/Policy) Shri J. S. Johar. He in his welcome address highlighted the aims of the training Programme.

CPO Shaheen Ahmad Khan while presenting the vote of thanks on behalf of all participants extended gratitude to the chief guest, DGP J&K, Police Headquarters and NIA for organising the successful capacity building programme. At the closing ceremony mementoes were presented to the officers.