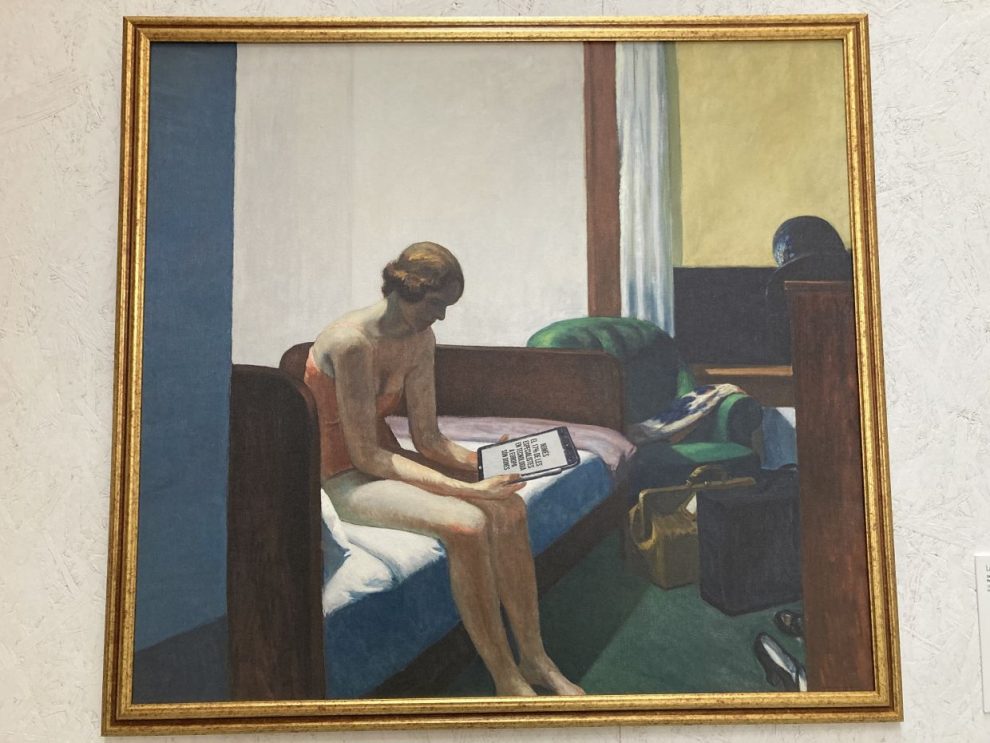 BARCELONA: A painting of a woman using an iPad, a vase depicting children dreaming of computers – both historical objects with a contemporary twist highlighting the world’s growing digital divide during the coronavirus pandemic.

The exhibition at Barcelona’s Analog Museum of Digital Inequality aims to show how this gap – laid bare by COVID-19 -disproportionately affects women and low-income and ethnic minority groups.

The so-called “digital divide” refers to the gap between those who have access to computers and the internet, and those with limited or no access.

About 54% of the global population used the internet last year, but less than a fifth of people in the least-developed countries were online, according to the International Telecommunication Union (ITU), a United Nations agency.

“Technological inequality is a hidden problem, (but) it has become especially obvious throughout this unprecedented year,” said Isabella Longo, project director at BIT Habitat, the nonprofit behind the exhibition, which opened last month.

With the pandemic forcing people everywhere to move online for work, school and socialising, citizens and governments have had to take a technological leap, which risks leaving some behind, she said.

“Technology has been a barrier for those people without (computer) skills and who are often part of groups at risk of social exclusion,” Longo told the Thomson Reuters Foundation in a phone interview.

The pandemic has not only revealed the extent of digital inequality, but has also widened it drastically, say tech experts.

“The digital divide has always been there, but what the COVID-19 pandemic has done is turn it into a canyon,” said Lourdes Montenegro, digital inclusion lead at the nonprofit World Benchmarking Alliance, which earlier this month launched a corporate digital inclusion benchmark.

“As more businesses embrace digitalisation as an adaptation to the pandemic, we run the risk of leaving more people behind,” he said.

The exhibition, which is planned to run until late next year, includes a painting created this year by Spanish artist Yaiza Ares called “From an iPad” which highlights the gender gap.

The artwork, a reinterpretation of American realist painter Edward Hopper’s “Hotel Room,” depicts a woman sitting on a bed and looking at text on an iPad that reads: “Only 17% of technology specialists in Europe are women.”

A 2018 report by the European Parliament found that women tend to avoid studies in information and communication technology (ICT) and are under-represented in digital careers.

In the European Union, nearly four times as many men as women graduated from ICT courses in 2020, according to the EU’s statistics office Eurostat.

Inadequate economic resources also make women less likely to have access to technology, resulting in a lack of digital skills that are transferable to the workplace, policy experts say.

In some regions, the gender divide is significantly more pronounced, with South Asian women about 70% less likely than men to have a smartphone and African women more than 30% less likely, according to the Organisation for Economic Cooperation and Development.

The pandemic has exacerbated existing gender inequalities due to increased telecommuting, said Konstantina Davaki, a social policy fellow at the London School of Economics.

Women are over-represented in casual, part-time and temporary jobs that offer little flexibility to work from home, she explained.

And as job markets continue to deteriorate due to the pandemic, further reducing women’s digital access, “the digital gender gap is likely to deepen,” Davaki said in emailed comments.

While some children sit studiously doing maths and art classes at their home computers, other less fortunate ones look on wistfully, wishing they had their own screens.

The scene decorates a ceramic pot by Spanish artist Maria Melero – her modern-day version of an ancient Greek pot – which is included in the exhibition to illustrate how the digital divide has impacted children.

Two-thirds of the world’s school-aged children do not have internet at home, according to a report published last month by UNICEF, the United Nations children’s agency, and the ITU.

Nearly 250 million students worldwide are still out of school due to COVID-19-related closures, it said.

“Closing the digital divide is a fundamental equity issue, critical to breaking the cycle of poverty,” said Lane McBride, a partner at Boston Consulting Group.

Only then can students develop crucial digital literacy, as well as professional and technical skills that they will need in their future careers, he wrote in an email.

“With the onset of the pandemic, this divide has threatened wholesale learning loss,” said McBride.

Davaki, the social policy expert, said that permanently closing the digital divide requires state institutions, policymakers, civil society and the private sector to cooperate to ensure that everyone, everywhere can get online for free.

“Access to technological infrastructure and the internet must be guaranteed to all communities and be free of charge,” she said.