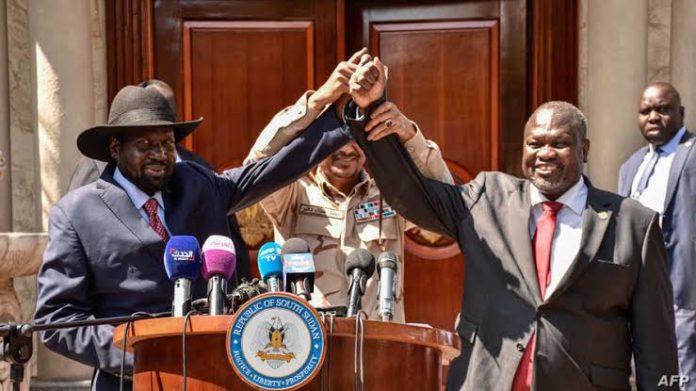 The president of South Sudan, Salva Kiir, on Tuesday said that he had agreed with rebel leader Riek Machar to form a national unity government within 100 days, the state media reported.
“We have agreed to form a national unity government within 100 days. Ceasefire will continue, we have no desire to see the war resume,” Kiir was quoted as saying by the Sky News Arabia. The conflict between Juba and insurgents, led by Machar, erupted in 2013, with at least 382,900 people having been killed so far, according to a recent report issued by the London School of Hygiene and Tropical Medicine that was commissioned by the State Department and US Institute of Peace.
Machar, who used to serve as the vice president before the conflict, was even forced to flee to Khartoum, the capital of neighboring Sudan.
In September 2018, Kiir signed a power-sharing deal with the rebel leader and a former vice president, Machar, to end the five-year civil war. The sides subsequently missed the May 12 deadline set in the agreement to form a unity government and extended it by another six months. Under the deal, Machar was also expected to return to Juba and become vice president again.
At a similar meeting in Uganda in November this year, the South Sudanese president and the former rebel leader decided to postpone forming a unity movement by another 100 days beyond the November 12 deadline.
The formation of a unity government in South Sudan was delayed because the country has not received sufficient external financial aid to boost reconciliation efforts, the opposition South Sudan Patriotic Movement leader, Costello Garang, stated in November.
The United States, on Monday, imposed sanctions on two high-level officials of the South Sudanese government for their role in extending the conflict in the country by obstructing the reconciliation process.
The Treasury Department said South Sudanese President Salva Kiir and opposition leader Riek Machar reached an agreement in 2018 that called for forming a national unity government by this May.
South Sudan gained independence from Sudan in 2011.