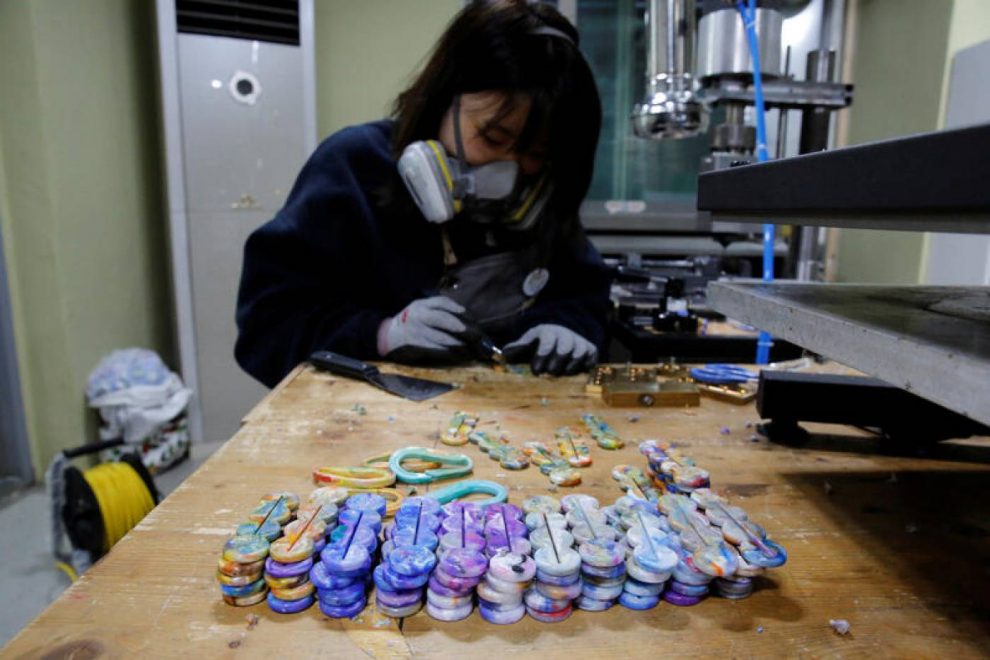 SEOUL: At a workshop in the South Korean capital, two environmental activists melt down old plastic bottle caps that thousands of volunteers known as “sparrows” have collected in a bid to fight a tide of plastic the novel coronavirus has helped unleash.

Green activists Kim Yona and Lee Dong-I use the bottle caps to make a tube-squeezing device – something they hope consumers will find useful and be able to keep, rather than toss out after just one use.

“Plastic is a recyclable resource,” said Kim, 26. “But it’s way too cheap, easy to make and easily thrown away, which makes people think it’s disposable.”

The environmentalists opened their “Plastic Mill” in downtown Seoul in July, attracting 2,000 volunteer “sparrows” – the name comes from a Korean expression about the bird that can’t resist stopping at a mill to peck – who gathered an estimated 85,330 bottle caps in a collection drive.

Unlike bottles, the caps are usually discarded at recycling facilities as they need extra work to sort, the activists said.

The “sparrows” get one upcycled tube-squeezer as a reward, no matter how many caps they bring in.

“We can’t reward them for sending lots of plastic, our goal is to reduce it,” said Lee.

The coronavirus has led to a surge of takeaway food and drink in South Korea, as elsewhere, fuelling a 14.6% increase in plastic production – to 6,800 tonnes in the first eight months of the year, according to environment ministry data.

“If we don’t recycle it, it goes to landfill.”

But low oil prices are undermining the profitability of recycling, and not all waste that gets to facilities is actually recycled.

The recycling rate for collected waste fell to 40.6% in 2019 compared with 57.9 percent in 2015, according to lawmaker Lee Soo-jin, citing government data.

The activists know their project won’t end the problem.

“Plastic Mill can’t be the solution,” said Lee. “The problem is not plastic, it’s because we use it just once. We have to reduce plastic and reuse it. Upcycling is the last resort.”