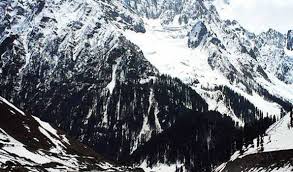 Srinagar, Nov 1; World famous health resort of Sonmarg, Apharwat peak at ski resort of Gulmarg and other upper reaches in Kashmir valley received fresh snowfall while weather remained cloudy in the plains on Sunday, resulting in dip in the maximum temperature.

A Met department spokesperson told UNI that isolated light rain and thundershowers would occur in south Kashmir while snow would occur at upper reaches in central and north Kashmir during the next 24 hours under the influence of a Western Disturbance, which is active in the region.

However, he said the weather will turn dry from Monday onwards, resulting in some improvement in the day temperature though mercury during the night is expected to plunge.

The main Gulmarg, which has witnessed increase in the influx of tourists from last about one month, received light rain in the evening after remaining cloudy throughout the day. “It has started to snow on Apharwat and Sunshine peaks much to the delight of the tourists in the ski resort, which received first snowfall of the season earlier this week,” a hotelier told UNI over the phone.

He said the people associated with tourism are excited as early snowfall would attract more tourists to Gulmarg, which is known for its ski slopes and the quality of the snow.

Fresh snowfall was also recorded on Sunday in tourist resort of Sonmarg on Srinagar-Leh national highway. The tourist resort remains cutoff for winter months due to several feet of snow.

World famous health resort of Pahalgam, about 100 km from here in south Kashmir, received light rainfall, resulting in dip in the day temperature, which settled about a degree below normal. However, the upper reaches in Pahalgam, including Chandanwari, received very light snowfall. Amarnath cave shine and its periphery, besides Sheshnag, Mahagung, Pisso top and Panjterni, also received light snowfall.

Skies remained cloudy in the summer capital, Srinagar, throughout the day, resulting in dip in the maximum temperature, which about 2 degree below normal. People in the city could be seen wearing sweaters and jackets to keep themselves warm.

Some others parts in the valley received light rain, resulting in dip in the maxim temperature.