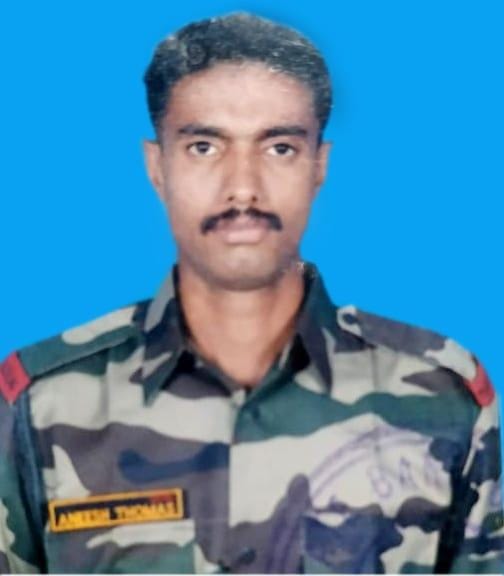 The soldier who lost his life in Pak shelling in Sunderbani sector of Rajouri district on Tuesday has been identified as Naik Aneesh Thomas.

A major and a soldier, both injured in the shelling, have been evacuated to a hospital in Akhnoor. Defence spokesman Lt Col Devender Anand said, “Pakistan Army resorted to unprovoked ceasefire violation along the line of control (LoC) in Sunderbani sector on Tuesday afternoon. Indian troops responded strongly to the enemy fire. However, in the incident, Naik Aneesh Thomas was critically injured and later succumbed to his injuries.”

“Naik Aneesh Thomas was a brave, highly motivated and a sincere soldier. The nation will always remain indebted to him for his supreme sacrifice and devotion to duty,” he added. Thomas belonged to Kerala.

The ceasefire violation took place in Mala area, manned by 17 Madras Unit of 28 Infantry Brigade, of Sunderbani sector around 1.20 pm.

The Centre had informed Parliament on Monday that there have been 3,186 incidents of ceasefire violation along the Line of Control in Jammu region this year till September 7.

In addition, 242 incidents of cross-border firing were also reported along the Indo-Pak International Border in Jammu region from January 1 to August 31. There have been eight fatalities and two injuries of Army personnel in J&K till September 7 and there have been five injuries of BSF personnel along the International Border and Line of Control in J&K.