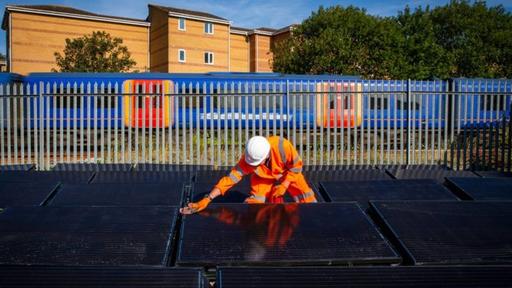 LONDON: Solar power will be used on a major railway line into London from early 2022, the company behind the project said on Monday, as Britain aims for net-zero emissions within three decades.

Riding Sunbeams, a social enterprise, said it would use a 2.5-million pound ($3.34-million) government grant to build a community-owned solar farm to help power trains on the line that links the capital with the southern seaside town of Eastbourne.

“It’s a fantastic opportunity to show the UK rail sector that commercial innovation can help power us all to the zero carbon future we need,” Executive Director Ollie Pendered said in a statement.

The project is a partnership with Network Rail, which operates and develops Britain’s railway infrastructure and is the country’s biggest single electricity user.

Renewable energy is already used to power some of the country’s railways, and Network Rail estimates that solar could provide 10% of the energy needed to run its trains, mostly on tracks in southeast England.

Once the 3.75-megawatt (MW) Cuckmere solar farm is complete, ownership will be given to the local community and commuters, according to Riding Sunbeams – a joint project between climate charity Possible and campaign group Community Energy South.

In October, Britain’s HS1 railway link between London and the Channel Tunnel became the country’s first train line to run entirely on renewable energy – with wind and solar powering trains on the route, the operating company said.

Riding Beams said it was working with Welsh train-operating company Transport for Wales and the capital’s Transport for London and hopes to replicate its business model throughout the country in partnership with Network Rail.

Prime Minister Boris Johnson last week laid out a 10-point plan for a “green industrial revolution”, which he said would create up to a quarter of a million jobs through measures such as expanding offshore wind power.

The plan also included a ban on sales of combustion engine cars by 2030, as well as support for hydrogen and nuclear power.

The World This Week: Trump’s setbacks in Georgia and Pennsylvania, hectic American engagements in the Middle East, and the race for the COVID-19 vaccines
Suited avatars and digital offices: Traders and bankers embrace VR
Comment